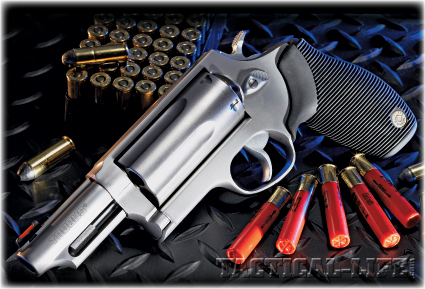 How do you improve on a good thing? More appropriately, how do you make your most appealing, best selling handgun even more appealing? If you are Taurus USA you take the Judge with a cylinder that accepts 2 1/2-inch shells and extend it to allow shooters to chamber all manner of .410 shotshell ammunition including 3-inch shells. 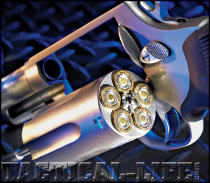 Producing a revolver that chambers both .410 shotgun and .45 Colt ammunition is not a new idea. Various manufacturers have done so in the past with some success. I’m not really going out on a limb here when I say that Taurus is the first company to actually do it right. Previous .410 caliber revolvers, yes .410 is a caliber not a “gauge”, were aptly described as “clunky, ugly, and unwieldy”.

It was due to that very fact that I was slow to embrace the Judge when it was originally released a few years back. My hesitancy proved unfounded when a good friend told me flat out “You have to try this gun.”

Gun Details
Being originally impressed by the quality and excellent handling characteristics of the first Judge, it was an easy sell for me to test the newer model. Essentially, the new model Judge shares the same features and qualities as the original save one big change. The 5-shot cylinder has been lengthened to accept up to 3-inch .410 shotshells.

As for the factory specifications, the Judge featured herein is a standard double-action revolver that will accept all .410 shotshells in 2 1/2- and 3-inch varieties as well as .45 Colt ammunition. The rifled barrel is 3 inches. Up front you will find a red/orange fiber optic front sight. The rear sight consists of a square notch cut along the top of the frame.

Regarding the action, the double-action pull was very smooth for a factory gun and the single-action has a crisp, positive feel. The trigger is wide and smooth as you would expect on a DA revolver. The cylinder release is thankfully polished and rounded. Those of you out there with scarred thumbs from the square, sharp releases of old magnum wheelguns will appreciate this.

The feature that is probably most important and yet underrated is the Taurus patented “Ribber” grip. This soft rubber grip has been gracing their DA revolvers for a number of years now and quietly doing a tremendous job. The grip gives you a solid purchase on the big gun and fills in the gap between the triggerguard and grip frame. This area has historically produced the greatest discomfort and pain for magnum revolver shooters. The matte stainless finish and black grips offset each other nicely.

This gun is certainly not a pocket pistol as it tips the scales at 36.8 ounces empty. By comparison, the original Judge weighs 29 ounces. That extra steel adds 7 ounces but it also dampens felt recoil. Overall length of the gun is 9.5 inches. As an added feature all Taurus pistols include the Taurus Security System with two dedicated keys.

Range Time
As this gun is definitely out of the ordinary my range testing time needed to be a bit unique as well. My test fodder came from Remington and included 3-inch shotshells loaded with #6 and #7½ birdshot as well as 2-1/2-inch slug ammo. According to Remington the solid lead slug is 1/5 of an ounce or 87.5 grains.

Rather than simply fire at paper and cardboard, I wanted to test out these common types of .410 ammunition on realistic material and see what kind of damage and penetration I would get.

My first stop would be the local home store. While there I picked up half-inch drywall/sheetrock, insulation, plywood and 2×4-inch lumber. From this material I would construct an interior wall façade. The “wall” consisted of half-inch layer of sheetrock, one layer of fiberglass insulation, half-inch plywood and finally another layer of sheetrock. This barrier was transported to the range along with a silhouette target frame and Bullet Test Tube material.

Once on the shooting range, the wall façade was set up in front of a silhouette target clothed in a cotton T-shirt. The head of the target was poking up over the wall. From a distance of approximately 5 yards, I fired the #7½ shot load followed by the #6 load and finally the .410 slug.

Upon close examination, I discovered that the #7½ shot had failed to penetrate the first layer of sheetrock. Much of it was stuck in the dry wall while some was actually lying on the table. The #6 shot penetrated the first layer of sheetrock but failed to exit out the other side. Not surprisingly, the lead Foster-type slug passed all the way through the wall, through the target and ended up in the berm down range.

For the next portion of my testing, I placed a layer of Bullet Test Tube material onto the silhouette under the shirt. The gel like material was about 2 inches thick. Firing the #6 shot into the target I found that most of it passed through the gel material but did not have enough force left to exit the cardboard target backing.

A couple of years ago, I was asked to prepare a review of defensive loads for the shotgun. During this workup I performed a similar test on a rack of beef ribs. The ribs and meat were no more than 1.5 inches thick. From 7 yards I fired a load of #7 shot from a 12 gauge shotgun. Not one pellet passed completely through the meat/bone combination.

The last penetration test I performed was with the .410 slug and the Bullet Test Tube. From about 5 yards I fired the slug into the tube. The entrance hole was considerable. After returning home from the range I split the tube and discovered that the slug had caused a permanent cavity in the material about 5 inches deep and completely fragmented. Six separate pieces of the lead projectile were recovered.

Keep in mind the 1/5 of an ounce is approximately 88 grains. The slug was moving at better than 1600 feet per second (fps) out of the Taurus Judge when it struck the Test Tube.

The Threat
What can we take from all of this? Surely birdshot at close range will cause a horrific surface wound on a human attacker. On a venomous threat, such as a rattlesnake, this would prove devastating.

When it comes to two-legged predators we need to understand that there are three basic classifications: Type 1, 2, and 3. Type 1 will surrender or flee from a determined show of force. The display of a firearm will send them running. A Type 2 attacker will stop only after some type of harm has occurred. The wound or injury may not necessarily be life threatening, but the fact that they have been injured will cull them.

The last classification is the Type 3, a determined and deadly predator that has no fear or regard for the display of a weapon. This predator will only stop when their body has been damaged to the point where they are physically unable continue. Many of those in the Type 3 category are narcotic drug users, their minds so polluted and rotted by poison that they have not the sense or rationality to fear even an armed defender.

The problem you as a good citizen have is that you will not know the threat you are facing until it has materialized. Will the mugger melt away at the first sign of resistance or will they determined to take what they want regardless of the cost?

Some would argue that lack of penetration is a good thing in the event of a home/apartment invasion where innocents might be in another room. That is certainly something to consider. If over-penetration of interior walls is a definite concern then birdshot load might be viable for you. However, you must keep in mind the limitations of such a load.

Final Notes
Overall, the Judge gets high marks for quality, construction, and handling characteristics. Even with the “magnum” 3-inch shell it was easily controllable. The fact that you can chamber such a wide variety of ammunition makes it a most versatile firearm. Snakes, varmints, and two-legged predators can all be dealt with.

The key to using the Judge effectively is knowledge and training. Load it with the right ammunition for the task you hope to accomplish. Be smart, be safe, and keep shooting straight.