0
SHARES
536
VIEWS
Share on FacebookShare on Twitter
The idea for combining a .45 caliber cartridge and a .410 shot shell in one gun is not new, it has generally been limited to specially-built over/under Derringer-style pistols. Taurus International’s Executive VP and Chief Operating Officer (COO) Robert Morrison, asked the engineers at Taurus if they could build a revolver chambered for both a .45 LC cartridge and a .410 shot shell. The result was the original Judge chambered to fire either 2½-inch shot shells, .45 LC cartridges, or a combination of both. The limitation of the 2½-inch guns was the number of pellets in .410 gauge 000 buckshot shells, usually three, although that has changed with the new 3-inch Magnum Judge.

“The new, longer cylinder 3-inch magnum version loaded with 000 buckshot is probably the most awesome self-defense weapon I have ever seen,” says Morrison. “The thing you have to remember is that the pellet doesn’t know if it is spraying from a shotgun barrel or a pistol, it is coming at you at about 950 fps (feet per second), and with a 3-inch .410 buckshot load, five pellets of approximately .36 caliber (.350) diameter, the result at close range is devastating.”

“At 10 feet, says Robert Morrison, “five pellets all strike within the upper part of the chest cavity, at 15 feet the spread covers the torso, and at 30 feet from the head to the beltline.” An accurate shot with the 3-inch Magnum Judge is like being hit five times at once. According to Morrison, “The cumulative effect of that form of impact is far more dynamic than a double-tap, which is to hit your target with one aimed shot and a quick second follow up shot. It is the multiple impacts that make a double-tap so effective, so when you compound that with five simultaneous hits, it is far more immobilizing.”

Gun Details
We chose to test not only the new 3-inch Magnum Judge but also the handy and compact Judge Public Defender. The latter is chambered for 2½-inch shot shells and the former is equipped with Crimson Trace Lasergrips. The 3-inch is the real home defense powerhouse of the Judge line-up. Taurus also makes a special tactical version of the 2½-inch chamber .410 gauge Judge fitted with a ported barrel and attachable Picatinny under barrel rail for mounting a laser, flashlight or combo unit. The 3-inch magnum, however, is ideally suited for home defense use. 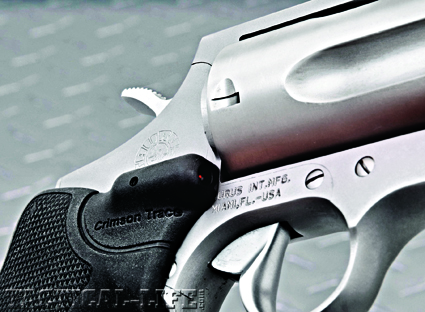 “With the 3-inch magnum you have five pellets with each shot and you don’t have to be as good an aim because of the spread. I can personally shoot five targets a yard apart at 3 yards in less than 1.5 seconds. The recovery time between shots is very quick and the recoil is not bad at all with the .410 and ‘ribber’ grips,” says Morrison.

Fitted with the Crimson Trace Lasergrips you give up some of the recoil dispersion of the Taurus’ energy absorbing “ribber” grips, however, the Crimson Trace also uses rubber rather than hard plastic for their grips. The tactical advantage of the laser is not only the improved aiming ability, particularly in a low light situation, but also as a great psychological weapon. As Morrison points out, “If you put the laser on someone and they see the red dot on them they don’t want to get hit.” The psychological advantage is that it instantly throws your adversary off-balance and they want to move out of the way. The tactical advantage is you have a better chance of aiming under the high tension and adrenalin rush that comes from a confrontation.

With the 3-inch Magnum going to one extreme, Taurus also went in the opposite direction by creating a smaller frame, snub nose version for concealed carry. The new Public Defender, which is based on the smaller Taurus Model 85 revolver frame, uses an elongated cylinder chambered for both .45 LC and 2½-inch 000 shot shells. The PD is not a small gun but it could be more easily carried in a slim belt or paddle holster, or as Morrison suggests in a fanny pack. “If you need a gun to defend yourself with, that’s the one I’d wish I had in my hand if the time were to come,” says Morrison.

Range Time
In addition to Winchester’s standard 000 buckshot in both 2½-inch and 3-inch chamberings, Federal Premium makes a special 2½-inch 000 buckshot load for the Taurus Judge Public Defender that has four pellets instead of three. Paraklese Technologies makes a 3-inch .410 shot shell loaded with six .330 caliber 00 pellets, a .410 loaded with five .375 caliber pellets (which they term 4-ought buckshot or Ultra Buck), a .45 LC 185-grain JHP, a 230-grain hard cast LRN .45 LC, and a 2½-inch .410 shot shell packing four .375 caliber 4-ought pellets.

For our range tests we used standard B-27 silhouette targets. The 3-inch magnum tests were conducted using Winchester 000 buckshot and Paraklese 0000 .410 loads at a distance of 7 yards. The Taurus PD was tested using Winchester 000 and Federal Premium’s special 000 4-pellet buckshot. We selected a distance of 7 yards as the best compromise and likely the greatest average distance in which the guns might be used in a home defense scenario. All 7-yard test shots with the 3-inch Magnum were fired using a two hand Weaver Stance. For the Public Defender, a one hand Isosceles Stance (square-on crouched position with the strong side arm fully extended) was used.

Both Taurus models have extremely heavy trigger pulls at slightly less than 12 pounds, which is an advantage in preventing an accidental discharge and in causing your grip to tighten up (the recoil is substantial with the PD and 000 buckshot). Of course the down side is a near 12-pound trigger pull, but once you get a feel for it, it is more than manageable. The 3-inch Magnum can also be fired single-action and trigger pull decreases to 5.1 pounds. The PD trigger pull decreases to 5.3 pounds average but with its bobbed, serrated hammer is harder to thumb cock.

The Winchester 000 buckshot in the 3-inch Magnum delivered an impressive and tight pattern. Five rounds fired at one-second intervals placed all of the buckshot within the 8, 9 and 10 rings of the B-27 target, with the majority concentrated in the 9 ring at the 9 and 10 o’clock positions and a total of 10 hits in the central body mass. As Morrison says, “Devastating.” 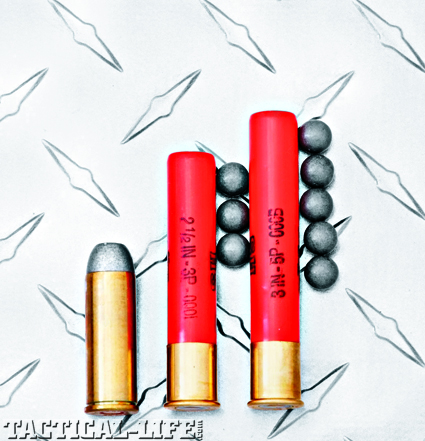 The Paraklese 0000 Ultra Buck provides five .375 pellets (roughly the equivalent of being hit by five .38 caliber round nose lead bullets) as opposed to the five 000 in the Winchester shot shells. The Paraklese produced a wider pattern dispersion spread across the 8, 9, 10, and X. The one advantage was that the pellets tended to group in pairs averaging an inch or less apart, four of which struck in the X. The only problem with Paraklese is a tendency for the shell cases to swell after discharge just below the base of the brass, which makes ejection more difficult and hinders a quick reload. The company is working on this problem at the present and the latest rounds tested showed an improvement, both in case crimping and reduced swelling. As for accuracy, when you can place a dozen .375 caliber rounds in the 9, 10, and X rings of a B-27 target, you have delivered almost 50 percent of your pellets (out of a total of 25 from five shot shells) within the central body mass—a disabling strike by any standard.

Between the 3-inch Magnum and new Public Defender, we found the smaller, lighter, 2½-inch .410 gauge revolver an exceptional close-quarters defensive handgun. Loaded with Winchester’s 000 buckshot (three pellets), five rounds deposited strikes across the central body mass of the B-27 target with all but two pellets in the 8, 9, and 10 rings. The real champion is Federal Premium’s Personal Defense 000 buckshot (four pellets) made for the Taurus Public Defender. This proved to be the most accurate and most potentially devastating of all the shot shells tested. At 21 feet, five rounds fired at one-second intervals delivered the 000 pellets within the 9, 10, and X with four closely grouped in the X, and multiple overlapping hits in the 10 measuring under an inch.

As a last test, since both Taurus models are also designed to fire .45 LC, we tested Paraklese’s specially made 230-grain JHP rounds. Two strings of five rounds were fired at 10 meters (33 feet) using a two hand Weaver Stance at a 50-foot slow fire target. If the target were laid over a B-27, all 10 rounds would have been within the 9, 10, and X rings for solid central body mass hits. Still, when push comes to shove, we’d prefer five 2½-inch Federal Premium Personal Defense 000 (four pellet) buckshot shells in either Taurus over just about anything.

Final Thoughts
Morrison concludes by saying that in his 42 years in the firearms business (including his many years with Colt), he has never seen a single product that has taken off and captured the imagination of people who are concerned with their welfare and protection like the Judge series. After testing both the big 3-inch Magnum and compact Public Defender we find both sidearms worthy not only of Morrison’s accolades, but of our own. The defense rests.              l