0
SHARES
10
VIEWS
Share on FacebookShare on Twitter
Big bore revolvers chambering .410 shotshells are not new. Over the years there have been a number of them from various manufacturers and these guns have seen varied amounts of success. When Taurus introduced their version of the .410 revolver, I admit I wasn’t all that excited about it. 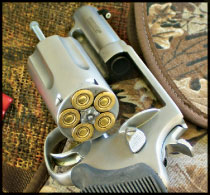 The truth is, it was not until I had a conversation with my friend Dave Biggers of XS Sights that I even considered testing the gun. Dave had picked up the new Taurus Model 4510 on the recommendation of a friend. Naturally, the first thing he did to his new gun was to install an XS Big Dot Tritium front sight.