When we talk about compact pistols chambered in .25 ACP terms like “back-up” or “hideout” tend to work their way into the conversation. In a group of gun guys, the phrase “mouse gun” will often be tossed out as well. There is no doubt that the little .25 ACP round is pushing it as a defensive round, despite that fact the diminutive cartridge has been around for more than 100 years. During that time dozens of other pistol cartridges have fallen into obscurity. 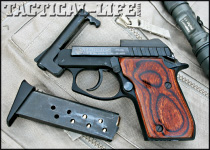 With larger, more powerful handguns available, why would someone carry the .25 ACP? First, not everyone has the physical stature and ability to tolerate handgun recoil even from what many would consider mild rounds. I once knew a gentleman with arthritis so bad that he could not stand the recoil from .38 Special or 9mm handguns. Does someone such as this not deserve to be able to defend himself?

Secondly, the .25 is a small, easily concealable pistol. Sometimes our mode of dress dictates an ultra-compact pistol. I would rather have a small pistol on me when needed than a large pistol in the safe at home. Probably the most important piece of advice that I could give is to understand what you can reasonably expect from your handgun. As Clint Eastwood said, “A man’s got to know his limitations.”

I suppose the true reason why the .25 ACP is still in production has little to do with the round itself but with the pistols designed for it. One of the first .25 ACP pistols, the “Baby” Browning, was introduced as a vest pocket gun for the well-dressed and armed gentleman. Since that first micro-compact pistol was introduced, numerous gun makers have come up with versions of their own.