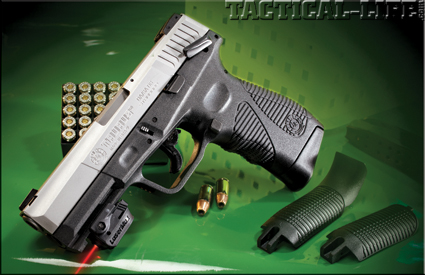 Further enhancing its defensive capabilities, the PT24/7 G2 features a rail for the attachment of a variety of lasers and lights, such as this LaserMax Micro laser shown here.

Despite the predictions made by hardcore purists in the early 1990’s, this “plastic gun fad” is far from over. It’s quite the opposite, as every major handgun manufacturer in the world has some form of polymer framed pistol and/or revolver.

Taurus International entered the polymer-framed pistol market with the model 24/7 several years ago. Since that time they have added a tremendous number of guns to their line and made several modifications to the original design. 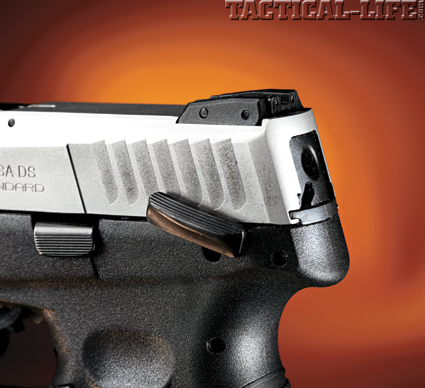 Gun Details
The Taurus model 24/7 G2 is the latest version of the pistol, and featured herein is a 9mm incarnation. This Generation 2 model is essentially the culmination of original 24/7 models and the Taurus 800 series. The G2 in 9mm holds a substantial 17 rounds of ammunition in steel magazines, two of which are provided with each gun. The slide of the sample pistol was made from stainless steel, but carbon steel slides with a blue finish are also available. As touched on, Taurus uses a textured black polymer frame. Three different backstraps are provided in small, medium and large sizes. The stainless steel barrel is 4.2 inches and the overall length is 7.28 inches. 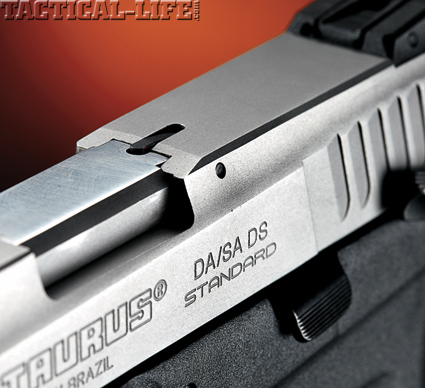 The Taurus 24/7 G2 pistol includes a loaded chamber indicator atop the slide.

As for the controls, this gun is a lefty’s dream. All of the manual controls (including the magazine release button, slide lock and manual safety lever/decocker) are ambidextrous. In regards to the trigger and action, the 24/7 G2 is a striker-fired gun. However, unlike most conventional guns of this style, the trigger function is DA/SA.

Specifically, this means that the first pull of the trigger both cocks and releases the striker, while follow-up shots are single-action with the striker being fully cocked. Other features include an external extractor and a loaded chamber indicator on the top of the slide.

As for sights, those provided on the pistol are drift adjustable and the rear sight has a tiny elevation screw. These are the three-dot variety with white dots fore and aft. Each pistol is shipped in a padded hard case with all the accessories mentioned. 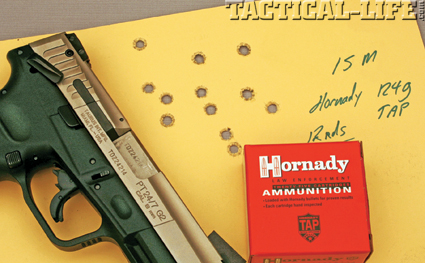 This rapid-fire string shot using Hornady 124-gr. TAP from standing shows performance well within the requirements of a self-defense weapon.

Range Time
It has been many years since I first tested out the original 24/7 Taurus pistol, so I really wanted to give this one a serious workout. For my range testing I picked out five separate loads of 9mm ammunition to include FMJ training ammunition and controlled expansion defensive rounds. Ammunition manufacturers represented were American Eagle, CorBon, DoubleTap, Hornady, and Wolf.

Step number one would be to chronograph each load over my Shooting Chrony F1. From the 4.2-inch barrel I expected moderate velocities. What I found was that every load was on par with pistols of similar size. Next up was some bench work. I posted paper targets on a 15-meter stand.

During slow, deliberate shooting you truly get to know the trigger of a gun. The first shot double-action trigger press seemed to be a bit rough with the single-action press being a bit better. From the given distance I discovered that six-shot groups around three inches were the norm. Also, at 15 meters the rounds were striking 3 to 4 inches above point of aim but centered for windage.

The 24/7 G2 pistol is not marketed as a match or target gun, but was built for personal defense. With that in mind I set about running numerous shooting drills with the handgun. For initial reliability testing I loaded both magazines completely with 17 rounds and topped off the G2 with 17+1 to begin the testing.

My first positive indication was that the pistol would indeed cycle reliably when topped off. Cardboard silhouette targets were engaged from a standing two-hand hold. Thirty-five rounds into the practical testing, I switched to single-handed shooting. A total of 18 rounds were fired right-hand (dominant) only. After a magazine change, 17 rounds were fired left-hand (support) only. The G2 pistol ran without a hiccup.

Next up would be moving drills; forward, backward, and laterally. These drills test the shooter and their equipment. It was during these rapid target-engagement drills that I personally wished I had a different set of sights on it.

The last set of drills I ran were from unconventional and awkward positions. It’s an imperfect world and often you will have to fight from “non-traditional” positions. My drills included shooting from a flat prone (belly down), fetal prone (on your side) and supine (on your back). Flat and fetal prone are particularly useful when shooting around low, limited cover. The supine position simulates being knocked on your butt or falling down. No time-outs in gun fights. You must be able to fight from whatever position you find yourself in.

Lastly I practiced engaging targets from kneeling; both knees down, strong knee down and support knee down. You don’t know what kind of cover you might have available, left or right, high or low. It may very well pay big dividends to learn to work from all positions.

Final Notes
I am pleased to be able to report that the Taurus 24/7 G2 cycled with every round I put through it. No stoppages were encountered. Naturally, the lion’s share of practice and drills were run with the less expensive American Eagle and Wolf FMJ loads.

Despite my misgivings about the trigger feel during slow fire, I found that it was not much of an issue during the practice drills. The trigger felt rough, no doubt about it, but like many inexpensive factory guns I’d say that a dedicated break-in period will help the components to smooth out and mesh together. Training and practice is the key to running any firing system.

The price for the stainless G2 is a very reasonable $514. Check it out for yourself at taurususa.com or call 305-624-1115. If you haven’t had professional training, I implore you to seek out a qualified instructor. There are far too many good schools available to not be trained. If it’s been five to ten years, or longer since you’ve attended training, what are you waiting for?

Further enhancing its defensive capabilities, the PT24/7 G2 features a rail for the attachment…