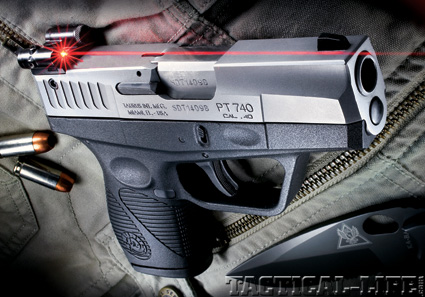 The new PT740 from Taurus USA combines slim and trim dimensions with the power and performance of the .40 S&W cartridge. It is shown equipped with a LaserLyte Model RL-TS rear sight laser unit.

Thin is in” would seem to be an appropriate catch phrase for concealed carry pistols this year. Numerous handgun makers are offering thin or slim versions to court the discreet carry handgun market. Taurus USA is on board this thin/slim train with a line of pistols in their “Slim” Series.

Gun Details
There are two caliber choices in the Slim Series, including the 9mm. The new PT740 “Slim” is chambered for the .40 S&W cartridge. Slide finishes are available in blue and stainless steel. A black polymer grip frame is the base for all of these pistols. Taurus’ model PT740 pistol weighs only 19 ounces empty and is 6.24 inches long.

The stainless steel barrel is 3.2 inches long. Two 6-round magazines are shipped with each handgun. The magazines have flat floorplates and seat flush against the base of the frame. Atop the slide Taurus has installed low profile 3-dot sights. The front sight is fixed while the rear sight is fully adjustable. Internally the PT740 has a striker-fired DA/SA trigger mechanism. A manual safety lever is located on the left side of the frame, which prevents the gun from firing and also locks the slide in place. Although ambidextrous safeties are the norm these days, Taurus chose to place only a right-hand safety lever on the 740 to keep the pistol as slim and trim as possible. In keeping with this, the safety lever itself is very low profile and unobtrusive. 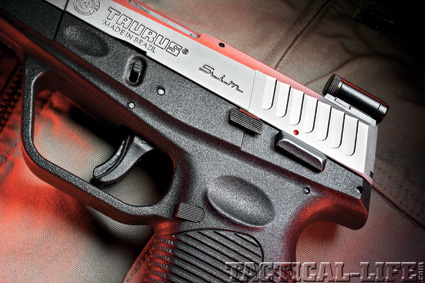 The PT740 features a non-ambi manual safety at the rear of the slide. A red dot is exposed when the pistol is ready to fire.

In addition to the manual safety, the PT740 features a trigger safety paddle located in the center face of the trigger. It is designed to prevent movement of the trigger unless the firer’s finger depresses the paddle. Working in concert with the trigger safety is a passive firing pin block. This spring-loaded plunger-style block prevents forward movement of the firing pin unless the trigger is pulled fully to the rear. As a further safety enhancement, the PT740 also employs a loaded chamber indicator at the rear of the ejection port on the upper portion of the slide. This feature offers the shooter both a visual and tactile indicator of the condition of the Taurus PT740’s chamber. Disassembly for cleaning is rather simple. The disassembly lever is located just above the trigger on the frame. The PT740 breaks down to five major part groups, including the magazine for routine maintenance. Taurus’ patented security system is present on the pistol and the action can be locked out with a special key. 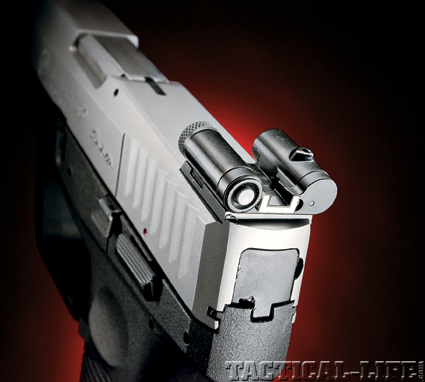 The author employed a LaserLyte Model RL-TS rear sight laser that combines a laser with a white outline notch sight.

LaserLyte Rear Sight Laser Small pistols and revolvers are some of the best candidates for visible laser sights. LaserLyte has a variety of “light amplification by stimulated emission of radiation” (LASER) devices from which to choose. One of LaserLytes newest products is their Model RL-TS, or rear sight laser unit. This visible laser-aiming device completely replaces the factory rear sight. However, there is a rear sight channel built into this LaserLyte rear unit. You can still use your iron sights if you choose to. Technically, the RL-TS is a Class IIIA 5mw output laser. The unit weighs 1.2 ounces and requires four 377 batteries. It has an activation button located at the rear of the device. LaserLyte states that the new battery life is five hours in constant on mode. Visible laser sights are not for everyone and they will not correct shooting/marksmanship errors. This is actually the biggest problem many instructors have with laser sights—the fact that shooters try to buy their way around training and practice. An untrained shooter will benefit little from the addition of laser sights. However, in the hands of a trained marksman, a pistol equipped with a visible laser system is a tool to be reckoned with. 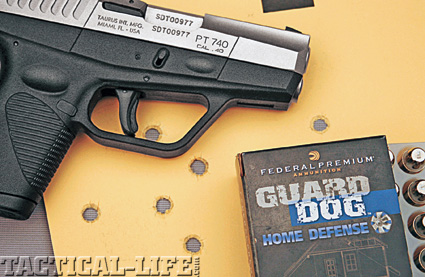 The pistol, tested at 15 yards, averaged groups in the 3˝ to 3.5˝ range, and was 100 percent reliable with all ammunition tested. Paul Markel Photo

Range Time For my range session I would use three different loads from two separate manufacturers. From DoubleTap Ammunition, I used their 125-grain TAC-XP copper, controlled expansion bullet and their 150-grain jacketed hollow-point loads. Federal has just released their new Guard Dog line of personal defense ammunition. The Guard Dog load is topped off with 135-grain “Guard Dog” bullets. These projectiles are expanding full metal jacket and are silver colored. The “Guard Dog” rounds feed like FMJ and expand like a JHP. It’s kind of a best of both worlds proposition. Step one was merely to chronograph each load over my Shooting Chrony F1. Recorded speeds were pretty impressive from a relatively short barrel. All of the loads posted speeds at 1,100 feet per second (fps) or better.

Next on the agenda would be the requisite slow fire from a bag rest. The target was set out at 15 yards. From that distance I fired six-shot strings. As mentioned earlier, the PT740 comes equipped with adjustable sights, and that’s good. From this distance, rounds were impacting about 4 inches left and 3 inches high from point of aim with the original factory setting. The resulting shot groups were 3 to 3.5 inches on average. While not match-quality by any standard, I suppose you could say that the pistol is definitely “Minute of Bad Guy.” After the slow-fire testing I loaded up both of the included magazines and ran some drills. I wanted to test the gun from different positions with two hands and single-handed. I’m happy to report that while shooting the PT740 I did not encounter any stoppages or failures to cycle. Even when fired from the support-hand-only, the gun cycled as expected.

Final Notes The Taurus PT740 gets an “A” for reliability. It fed a variety of ammunition without any difficulty. The pistol is certainly compact enough to be carried concealed with little trouble. I wouldn’t call it a “pocket pistol” unless you have large, generous pockets. However, with the right holster, belt and waistband carry should be a breeze. There is simply no getting around the fact that the .40 cartridge is a high-pressure pistol round. Felt-recoil from this ammunition is pronounced. After shooting a couple of magazines through this lightweight, compact handgun you will certainly feel it. I know I did. Concealed carry handguns are built for fighting and for my money I can do without any kind of “3 dot” sights. The sights on the 740 are a bit small for my taste and I’d like a front sight that really stands out. Of course, the addition of the LaserLyte rear sight laser remedies this situation for the most part. Bottomline, the gun went bang every time it was supposed to and that should be your primary concern. 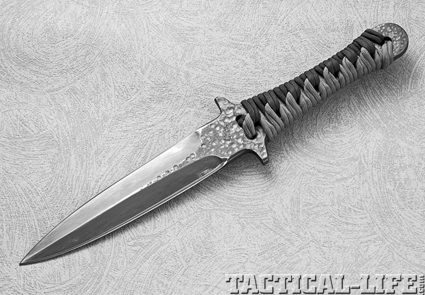 Here’s our Oregonian Treasure Hunt for a group of custom tactical knives.