260
SHARES
548
VIEWS
Share on FacebookShare on Twitter
The new Polymer Judge marries the benefits of ultramodern polymer with the hard-hitting capabilities of a .45/.410 concealment revolver. Shown with the Polymer Judge is a new DeSantis Gunhide belt holster designed specifically for the brand new revolver.

Polymer frames have been a solution to weight reduction in concealed carry firearms for over a quarter of a century, but Taurus has taken the concept to a new level with a polymer shell surrounding a steel skeleton sub-frame that is bonded with a lightweight black polymer exterior. Not only is the Public Defender Polymer lighter (by a quarter pound), but it is an entirely new version of the Judge that combines the best features of all previous models with the addition of an adjustable rear sight. 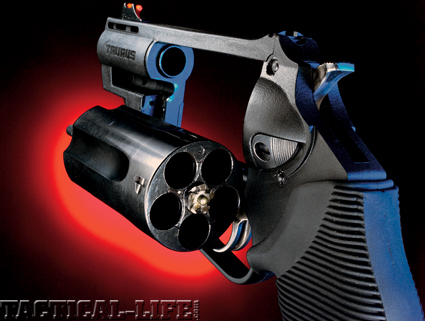 Note the steel frame inset just behind the barrel. The cylinder crane substructure extends into the polymer outer shell, which accounts for the unique, squared-off frame contours.

Gun Details
The fact that the majority of CCW holders will never draw their gun (unless they’re at the shooting range for practice or qualification) makes weight a big factor when selecting a weapon that will be riding on your hip day after day. That Taurus manufactured a gun chambered in .45 Colt/.410 gauge as compact as the original Public Defender is in itself an achievement, but at a weight of 28 ounces empty (five .410 shotshells ups the carry weight another 5 ounces), you definitely know it is there.

Speaking with Taurus president and CEO, Bob Morrison, he explained that, “Making the Public Defender lighter in weight, while not compromising the integrity of the gun, led our engineers to conclude that a polymer exterior was the best way to achieve our goal. There is a full metal skeleton under the polymer exterior, and although it might be highly uncomfortable, the gun could actually shoot without any polymer around it. What we do is put that full-steel frame into a special mold we developed and inject the plastic around the frame so that it attaches to the metal. It is a very delicate manufacturing operation done under great pressure. You end up with a polymer frame bonded to the steel skeleton underneath.”

To make all of this work, the Public Defender Polymer has a very different frame configuration and every part of the gun’s exterior, except for the 2.5-inch cylinder, is new. “The steel structure goes all the way around, over the top of the cylinder, down the back, the recoil shield is metal, and the crane is seated into the steel sub-frame that projects forward, giving the Polymer it’s squared off edges.” When you look at the gun from the left side you can see where the steel frame rests on top of the polymer triggerguard. The recoil shield is shrouded in polymer and the cylinder thumb release is recessed into the polymer panel. The topstrap and barrel shroud complete the exterior cover. The vent rib on top of the barrel shroud was done for aesthetics to give the gun additional character. 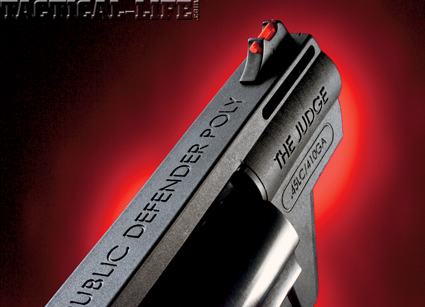 The fiber optic front sight is easy to see in low light. The vent rib is strictly for aesthetic appeal.

The total weight saving with the polymer exterior is 4 ounces. That is enough to almost offset the added weight of five .45 Colt cartridges or .410 shotshells, bringing the loaded weight of the Polymer Public Defender to within an ounce of an empty all steel Public Defender. More than weight savings, the new frame configuration and triggerguard design make the gun easier to handle. The new casehardened hammer and small hammer spur make the Polymer easier to cock for a single-action shot, whereas the bobbed hammer on the steel Public Defender can be somewhat difficult to use, making that model a dedicated double-action-only for some shooters.

Recoil is always the first question when polymer is being used and surprisingly both the steel and Polymer Public Defenders achieve the same recoil reduction through Taurus’ energy absorbing “ribber” grips and reinforced backstrap. The grip construction has the effect of a recoil pad on a rifle or shotgun in mitigating some of the energy transferred when the gun is discharged. The long 2.5-inch cylinder (the heaviest part of the gun) also helps manage recoil, especially with .45 Colt, which imparts a muzzle rise closer to a .38 Special in the Public Defender Polymer. Even tested with new Hornady .45 Colt Critical Defense FTX, felt recoil was no more than one would anticipate from a lighter load. Kick with Federal Premium Personal Defense 000 buckshot was no more severe than with the standard Public Defender, so there is really no tradeoff in going polymer.

“We’ve been able to achieve that through the design of the grip angle and working with the human structure,” explained Morrison. “You’ve got to structure the gun so the recoil isn’t abusive when you’re shooting it. I think ‘why we decided to make it’ is probably the real question, and the answer is that the public sort of demanded it; they were looking for something new and innovative. The high-tech polymer used for the Public Defender is a special blend developed for Taurus, and what we have achieved is a gun that doesn’t really feel any different than the all-steel gun. As for polymer guns I think we’re there. I think this is pretty much it.” 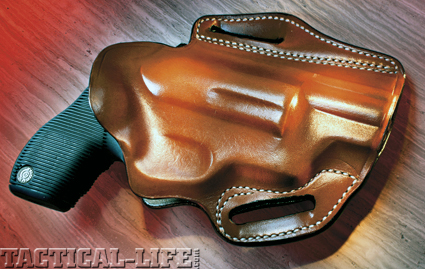 DeSantis was quick to design a new belt holster for the Polymer Judge, which has a frame configuration so different that most current holsters for the standard Public Defender will not fit.

Leather Carry
Since the Judge Public Defender Polymer is a completely new frame design it will not fit many of the new holsters designed for the Public Defender. Gene DeSantis was quick to get a Polymer in his shop and turn out the very first dedicated Public Defender Polymer belt holster. Explains DeSantis, “The holster design I used for the Polymer Judge was one I did for the FBI when they were carrying 4-inch pencil barrel Model 10s. It’s important to note the cylinder to belt location. The tighter you wear your belt, the harder that the cylinder is pressed, providing more security than you would think. There was an FBI instructor at Camp Smith in New York that demonstrated that holster for a 4-inch Model 19 back in the mid-1970s by standing on his hands. He did this at all of the police classes. One of the departments from Trumbull, Connecticut, saw his demo and ordered this holster for their uniform division! No kidding. We made them with 2.5-inch slots and that was their own duty holster.”

There is simplicity to the DeSantis design that comes through when you strap on this rig and holster the Polymer PD. We tried it at both the 2 o’clock and (DeSantis recommended) 4 o’clock strong side positions and found the gun easy to conceal under a sweatshirt, quick to retrieve and easy to re-holster. The contoured pouch and funneled throat securely snug up around the gun leaving only the hammer and grips exposed, and while hand stands are not part of our tests, we did turn the holster upside down, pull in the belt loops equivalent to a comfortable fit, and even with vigorous shaking the gun refused to fall out. When drawn, the gun breaks clean from the holster with your thumb right on the hammer and the funneled throat makes for quick re-holstering. 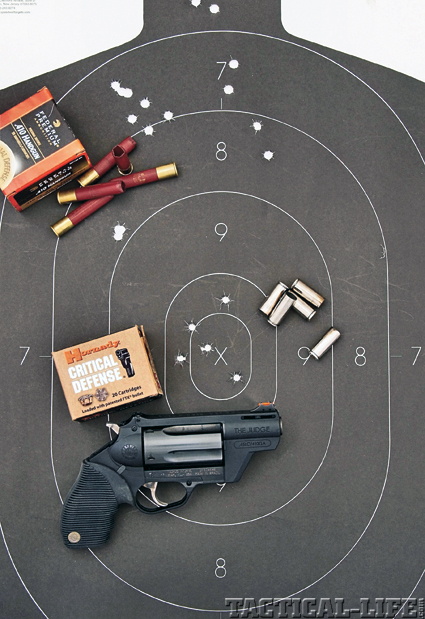 Shooting Impressions
The test was conducted under severe weather conditions, a balmy 18 degrees with bright sunshine. Could have been worse; could have been snowing. I tromped off 21 feet in the snow from a B-27 silhouette target and ran a series of tests with Hornady Critical Defense 185-grain FTX .45 Colt, which is factory rated at 1,150 feet per second (fps). The ProChrono clocked the rounds from the Public Defender’s 2.5-inch barrel at 750 fps average, measured 10 feet from the muzzle. Trigger pull on the test gun was 4.3 pounds fired single-action and exceeded the 12-pound max on the Lyman trigger gauge when fired double-action. However, 12 plus pounds doesn’t seem like much when you’re firing the Public Defender Polymer, and the color casehardened trigger will stage nicely with some practice.

During the test shots I used a Weaver stance and two-hand hold with the off-hand thumb over the strong hand thumb (fingerprint over thumbnail), which provided a better hold with the Public Defender. The adjustable rear sight (windage) was perfectly set up for the gun and the red fiber optic front sight was easy to center on target.
The best five-shot group with the Hornady measured 2.75 inches with all five rounds in the 10 and X. Switching to Federal Premium Personal Defense .410 gauge 000 buckshot (four pellets of approximately .36 caliber each), five rounds, a total of 20 buckshot fired at the upper torso delivered a spread of 9.5 inches with most shots grouping in pairs averaging an inch center-to-center.

Final Notes
Considering there is no trade off with polymer versus steel, the new Public Defender comes away with several advantages over the standard model, the most significant of which is the benefit of a hammer you can easily cock for a single-action shot. Adjustable sights are a plus but at 21 feet not a necessity, and as for lighter weight, it goes without saying a quarter pound is a lot when most manufacturers strive to shave an ounce or two off a new gun. There is also the durability factor of a polymer frame, its resistance to scratches, moisture, and the overall look of the new model, which though almost exactly the same size as the all steel gun, looks smaller. There’s nothing like basic black.