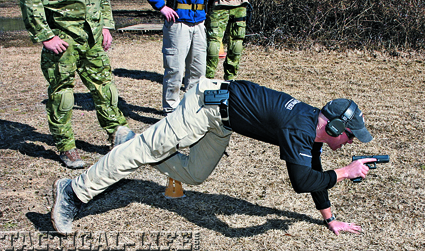 Students learn to fire from a variety of positions, utilizing both the strong and weak hand with simulated malfunctions and incapacitation.

I recently attended their Three-Day Tactical Pistol Course, where TSI incorporates many of the same training methodologies and drills used by its own instructors when they themselves were members of elite US Military Special Operations units. TSI courses are also competitively priced and are reasonably affordable, allowing for top-notch training while operating on today’s tight budgets.
Shooting Accurately

On the first day of training, one of the first points made by the instructor came in the form of a question so simple that it appeared to almost be rhetorical: “Why is it so difficult to learn to shoot a pistol accurately?” The students took a moment to contemplate the gravity of this seemingly innocuous question before offering several of the often recited answers, most of which alluded to the fact that pistols have a short sight radius and no fixed stock. The instructor conceded that these points were all contributory to the overall “problem” of learning handgun marksmanship; however, he then said something that was quite unexpected. According to TSI, the biggest problem people have with learning to shoot a pistol accurately is that the ratio between the weight of the trigger pull to the weight of the pistol is inversely proportional; the trigger pull weight is actually greater than the total weight of the pistol to which it is affixed.

The average modern fighting handgun weighs about 40 ounces (2.5 pounds), whereas the trigger pull for the same pistol can range from 3.5 pounds to up to 15 pounds in some DA/SA models. 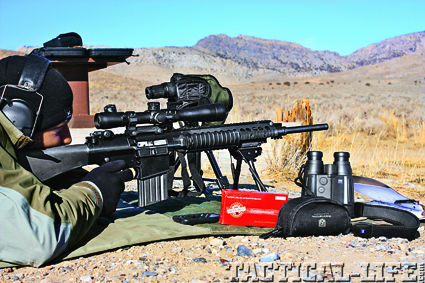 Students learn to fire from a variety of positions, utilizing both the strong and…