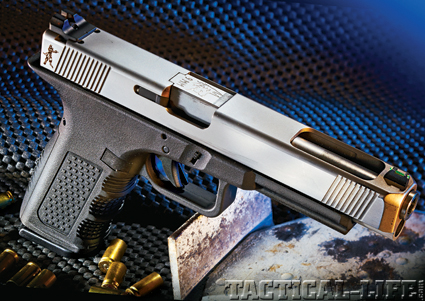 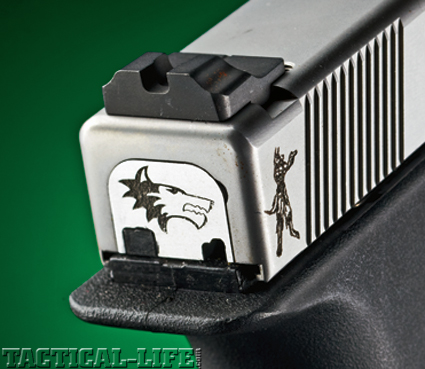 When it comes to shooting sports, there are all kinds. Gun games go through the same fads and popularity shifts as any competitive sport. PPC, IPSC, IDPA, CAS, 3-Gun, all these acronyms represent gun games competing with each other for shooters and sponsors. Add to that list the Steel Challenge.

As with every competitive shooting sport, there are competition divisions sanctioned by the Steel Challenge Shooting Association. Open, Production, Optic Revolver, Iron Sight Revolver, and Iron Sight Pistol are some of the more popular classes.

The Timberwolf from Lone Wolf Distributors is a customized version of the 9mm G34. Designed for competitive shooting, it features a lightening cut on the top of the slide, enhanced fiber-optic sight and a modular custom polymer frame.

Where the .45 ACP pistol was once the king of the hill because of “power factor” concerns, in the Steel Challenge you don’t need to knock the targets over, only hit them. This difference has caused a big swing toward pistols chambered in 9mm.

The stock Glock 34 pistol has been a popular gun for competitive shooters for many years, but it was considered “minor” caliber for many competitions. That factor being a non-issue for Steel Challenge, the G34 is great platform to build an iron sight competition gun. Featured in this review is a G34 modified and upgraded with materials from Lone Wolf Distributors (LWD). 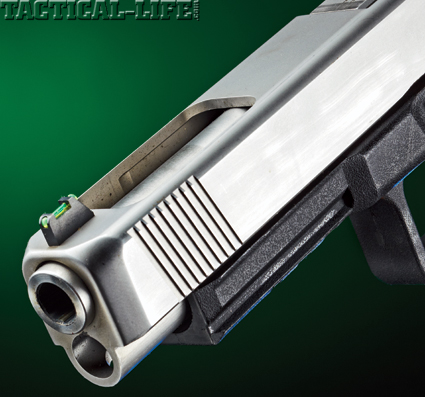 LWD installed a green fiber optic front sight. Cocking serrations are found fore and aft on the slide, and the nose is beveled in a “bull nose” style.

Gun Details
Let’s start out with the base for this gun project. The frame is a black polymer “Timberwolf” design built by Lone Wolf. This component has the advantage of being nearly one hundred percent compatible with all internal Glock components and it can be fed with G17 magazines.

The Timberwolf frame includes a light/accessory rail at the dustcover and the “finger hook” has been removed from the triggerguard. At the grip area LWD has applied checkered texturing and very shallow finger grooves to the frontstrap. On the rear LWD has installed an interchangeable backstrap. Unlike other companies’, the Timberwolf’s backstraps are “flat” and “swell” versus small, medium and large.

One of the most appreciated features of the new Timberwolf frame is the high beavertail that they have built into the backstrap. This is an option that custom Glocksmiths have been fabricating aftermarket for years. The beavertail allows for a high, solid grip on the pistol and allows for excellent recoil management. 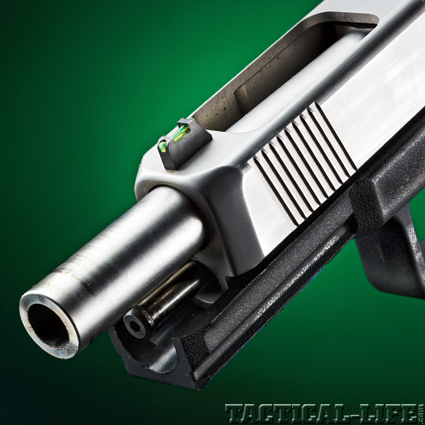 LWD offers its Timberwolf frames as “bare” models or “assembled” with all of the internal components in place. The trigger is smooth with a 5.5-pound press. Being made of polymer, a myriad of colors and color patterns are available including some wild styles such as Pink Camo and Copper Snakeskin. All the frames are serialized and therefore must be transferred through a licensed FFL dealer.

Onto the Timberwolf frame LWD mounted one of their stainless steel G34 slides. This component has forward and rear cocking serrations and a wide-open top. The nose is beveled in what they refer to as a “bull nose” style a lá G26. They have also slightly lowered the ejection port. At the rear of the slide is an LWD wolf head logo back plate. Inside the slide they have installed Lone Wolf custom springs and components.

Regarding the sights, LWD chose to install a set of steel Warren Tactical target sights. The front sight has a green fiber optic insert with a serrated front ramp. The rear sight is flat black iron with no dots. There is a hard cut shelf on the front of the rear sight that allows for one-hand cocking of the pistol; a nice addition for any fighting gun.

Into the slide LWD fit one of their M34 forged 416R stainless steel barrels. This barrel is 5.32 inches long with a polished feed ramp and match-grade rifling and target crown. This particular barrel allows you to fire all manner of projectiles, included hard cast lead if you desire. 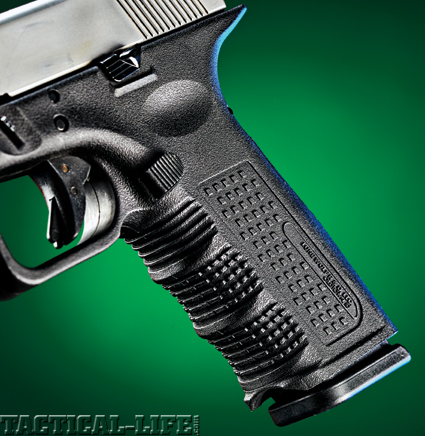 The grip portion of the LWD Timberwolf G34 frame features finger grooves on the frontstrap as well as generous molded-in checkering. 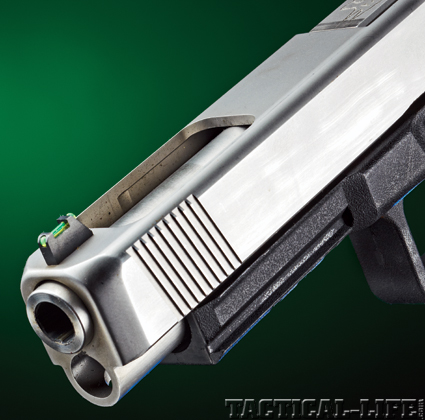 LWD installed a green fiber optic front sight. Cocking serrations are found fore and aft on the slide, and the nose is beveled in a “bull nose” style.

Range Time
My test and evaluation session for this pistol actually began in the heat of summer and ran through the beginning of fall. Guns like the LWD G34 are meant to be shot, and shot often. For my testing period I would need a serious supply of ammunition. For this I would tap into the bulk and training ammunition supplies from a number of ammo makers.

The Lone Wolf G34 pistol would be fed with 9mm FMJ ammunition from Black Hills and Federal’s American Eagle brand. Hornady has recently introduced its line of lacquered steel case ammunition under the “Steel Match” banner. The Hornady load used a 125-grain HAP (Hornady Action Pistol) bullet. Lastly, I ordered a full can of ammunition from Century Arms. In their catalog Century is offering a 1,700-round NATO-spec ammunition can of 9mm FMJ military surplus ammunition.

As per usual, my initial range session was devoted to the basic testing chores. Each load was chronographed to achieve an average speed and then fired from a bench using my range pack as a support. Considering I was using fixed iron sights at 25 yards, the groups were very good and certainly up to speed for steel plate shooting. My first session consumed perhaps 100 rounds.
The LWD pistol arrive a week before my trip to the 4H Shooting Education Camp in Jackson, Ohio.

Upon arrival I found that they had four stages from the Steel Challenge competition set up to train the 4H kids who would be attending. During lunch breaks and down time for five days I would have the opportunity to work the stages with the G34. 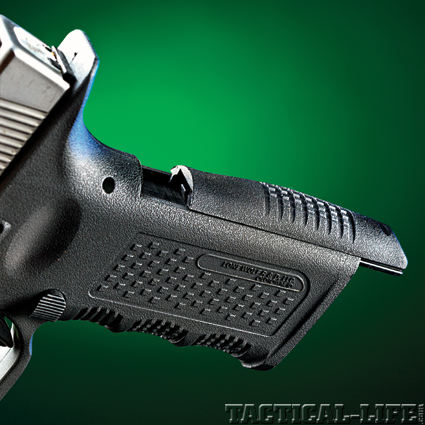 An additional enhancement of the Timberwolf frame is the modular backstrap system, featuring two interchangeable sizes—“flat” and “swell.”

At the 4H camp Scott Moore of the Scholastic Steel Challenge and Tom Yost from S&W supervised the set up of four stages from the official Steel Challenge course: Smoke and Hope, Roundabout, Five to Go, and Speed Option. Targets were set at distances from 7 to 35 yards depending on the stage.

The steel targets were either 12-inch circles or 18×24-inch rectangles. All of the Steel Challenge target plates are mounted to fixed stands and angled down at 20 degrees. This angle directs the bullet splash downward and decreases the likelihood that shooters and spectators will be hit with fragments.

Using a BlackHawk SERPA holster rig and corresponding magazine pouches I set to practicing with the Lone Wolf G34. The Warren front sight indexed perfectly on the white painted steel targets. At first I worked slowly and deliberately. I found that center holds on all the targets would produce solid hits. Ramping up the speed I began to consume copious amounts of 9mm ammunition and sound of clanging steel rang out across the valley. It wasn’t long before I could see the bottom of my ammo can.

My last session before sitting down to pen this review was at an indoor range. This time I spent some time focusing on more martial drills such as one-handed and support hand only shooting. I conducted “dead hand” drills using my strong hand only to shoot, reload and charge the pistol by snagging the rear sight on my gun belt.

Final Notes
All told from start to finish I fed the LWD G34 somewhere in the neighborhood of 1,000 rounds of ammunition from the aforementioned suppliers. The only real problems I encounter were some infrequent stovepipe type stoppages, perhaps one or two per hundred rounds. While such a stoppage is easily remedied with a “tap-rack” drill, from a Glock platform the stove-pipe is almost unheard of.

I suspected that the ejector might be the culprit. Close comparison between my tried and true Glock17 and the new G34 model showed that G 34 ejector needed a small amount of tuning—that is, a slight inward angle. After the tabletop tuning job the problem seemed to be solved and the stovepipe situation became a non-issue.

When it comes time to upgrade, modify and improve the performance and feel of your Glock pistol the sky is the limit. Lone Wolf Distributors has certainly done a fine job with their Timberwolf frames. Allowing several other shooters to examine the gun I found that most of their comments were favorable. Lone Wolf Distributors has earned a considerable reputation as a one-stop shop for all things Glock. They have branched out even farther with the introduction of their Timberwolf frames as well as their brand new pistol-caliber AR carbines and rifles.

Should you be looking for a full-blown race gun to run the Steel Challenge or simply to enhance the performance of your current Glock pistol, LWD certainly has much to offer. Its Timberwolf G34 pistol was definitely a great example of what you can do with the parts and components LWD offers. 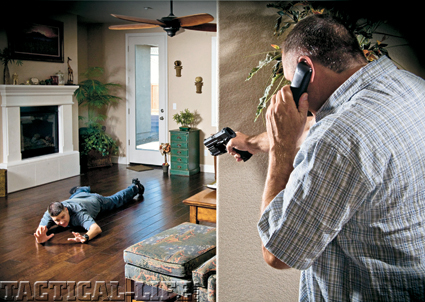 When it comes to shooting sports, there are all kinds. Gun games go through…