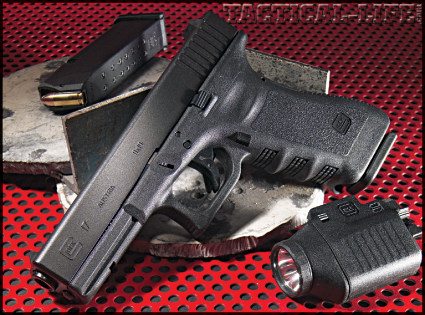 The Glock 17’s success story has been told and retold many times, so I’ll forego doing so. Suffice to say that after an initial period of disbelief as to its true versus claimed capabilities, it quickly achieved the honor of being considered to be the best 9mm service pistol ever built. It proliferated rapidly, to the point where it’s now found worldwide, used by countless military and police agencies and tens of thousands of self-defense oriented civilians.

It’s a great pistol, without a doubt, but while it’s more than proven its mettle, it can be made to perform even better. Surprised? Don’t be. The subject of improving the Glock 17’s performance doesn’t lie so much in the realm of mechanics. Instead it’s derived from something so obvious that few initially notice it—ammunition selection.

Regardless of how good its design may be, no gun exhibits the same accuracy with all loads. Nor does it produce the same terminal ballistics. In fact, given the wide variety of bullet designs currently available, there is really no guarantee it will even function with all of them.

For this reason, it’s necessary to test each load you’re considering to make certain it is all as you assume it to be. Characteristics like accuracy and bullet expansion are of great importance, but feeding reliability is important as well. When ammunition produces superior results in all three of these areas, you can rest assured that if you do your job as a marksman, it will produce the best possible results.

Also bear in mind that while all mass-produced guns share certain common characteristics, they still exhibit a number of individual traits, such as performing better with one or several particular loads while the results obtained by another gun of the same type might be totally different.

Our Ammo Tests
With this in mind, I’ve just completed a test of the more common 9mm factory JHPs to ascertain their suitability in the Glock 17. First, from an accuracy and controllability standpoint, all of them shoot well, better than most can shoot them. However, with specific reference to accuracy, some unquestionably produced better results than others.

Some expand better than others, at least in water. Unfortunately, results obtained in artificial mediums don’t always indicate a given bullet’s terminal ballistic capability in living organisms like a game animal or human being. However, I did take two of the best performers in water into the field and downed a couple of critters with them, finding the results to be surprisingly satisfactory.

In my G17, there were four particular loads that exhibited exceptional accuracy, the CorBon 90-grain JHP, CorBon 115-grain DPX JHP, Winchester Ranger SXT 127-grain JHP and Winchester Ranger SXT 147-grain JHP. From my Ransom Rest, all printed into 1.5 inches or better at 25 meters and at that distance shot either exactly to point of aim or within an inch of it. Of the four, bullet expansion to a diameter of half an inch or better was quite evident as well, making them excellent choices. No tendency toward excessive penetration was noted with any of the four loads.

How Much Expansion
In water, the CorBon Pow’RBall 100-grainer exhibited spectacular expansion, nearly turning itself inside out (which is precisely what it’s supposed to do). I have no doubt that it would produce similar results in humans with the added advantage of minimal penetration as well. However, it should be understood that loads like this are meant for specialized, rather than general-purpose, use.

For a civilian home or personal defense situation, Pow’RBall would give excellent stopping power without undue target penetration, but these same characteristics would make it unsuitable for use in a situation where there might be automobiles or other potential obstacles to be penetrated.

The other 115-grain JHPs mentioned expanded noticeably, though not exceptionally, fed perfectly through the test gun and produced minimal flash and recoil. As you might expect, penetration was more noticeable and was no doubt attributable to less expansion. This notwithstanding, all printed sufficiently close to point of aim at 25-meters to be considered satisfactory for general-purpose use.

Interestingly enough, 124- and 125-grain JHPs weren’t as accurate in my G17, with 3-shot 25-meter Ransom Rest groups of around 3 inches being the norm. Taken in perspective, this is still more than sufficiently accurate for the vast majority of tactical situations, especially under stress. It is certainly beyond the accuracy capability of all but the most skilled marksman.

In my gun, the standard velocity heavier bullet loads also printed a bit high at 25 meters for my needs, with 4 to 5 inches being typical. I prefer a 50, rather than 25, meter zero, so for my needs, 4 to 5 inches is way too high. The lighter bullet loads (CorBon 90-grain JHP; CorBon 115-grain DPX JHP and Winchester Ranger SXT [LEO] 127-grain “+P+” JHP) produce much higher velocities, and in my gun (equipped with Trijicon tritium sights) print either right on point of aim or approximately an inch or so above it.

However, in keeping with the concept that there is always an exception to the rule, for reasons I cannot identify, the Winchester Ranger SXT 147-grain JHP also printed in the same spot. From a bullet expansion standpoint, it was noticeably less efficient than its higher-velocity 127-grain counterpart.

All the loads tested exhibited minimal muzzle flash and easily managed recoil, even those considered to be “+P+”. And all fed flawlessly as well, without a single malfunction being experienced. This is not uncommon with all Glocks.

Final Notes
In summary, at least with my Glock 17, the absolute best all-around performers were essentially a cross-section of bullet weights and designs, driven at velocities of between 975 and 1300 feet per second (fps). Don’t forget my criteria: accuracy, terminal ballistic capability, functional reliability, penetration and controllability. Before I tested them, I could never have extrapolated or assumed that this would be the case, underscoring once again the need to test any loads you might be considering for self-defense use before you actually use them. Otherwise, you just might be making an assumption that could get you killed when confronted with a real-world gunfight.

On the other hand, your own testing in a different gun might yield results that are considerably different from mine. Nonetheless, if you don’t test each load you’re considering, you’ll never know for sure which ones will best suit your needs.

The Glock 17’s success story has been told and retold many times, so I’ll…