0
SHARES
3
VIEWS
Share on FacebookShare on Twitter
Galco worked with Kimber to introduce a complete line of holsters for their new Solo pistols before the guns were introduced.

There was a time when .45 enthusiasts referred to the 9mm pistol as the “half power.” A direct reference to John Browning’s two popular pistol designs, the 1911 .45 and the Hi-Power 9mm. A standard 115-grain 9mm bullet weighs exactly half of the standard 230-grain .45 slug—thus the “half power”—though I could never find anyone who was willing to get shot to prove this statement. There was a time when the 9mm was a pretty weak reed to lean on, but this is no longer the case as current 9mm hollowpoint ammunition is an excellent choice for personal security. 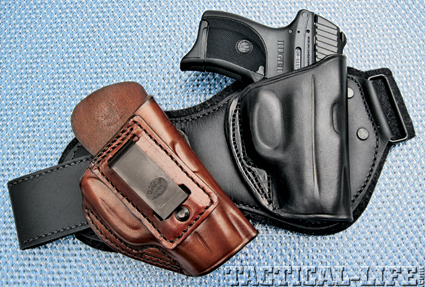 Ritchie Leather makes pistol scabbards to the standards set by the late Lou Alessi, one of the true holster greats. A Ruger LC9 rig is shown.

If a non-expanding bullet is used, I prefer one that is slow and fat enough to offer at least some ability to deposit energy to the body. A fast, pencil-point bullet would be more like an ice pick, in and out with little energy deposited, thus little effect on the target unless the brain or heart takes a direct hit. The current generation of 9mm ammunition is better than ever with actual street results supporting this. Loads like the Speer 124-grain Gold Dot +P, Winchester 127-grain SXT +P+, Federal 124-grain HST +P and CorBon DPX offer exceptional performance in actual street shootings. I have little reservation about carrying the 9mm—provided I do my part.

Conventional Options
With the thin, compact 9mm increasing in popularity for covert carry, the holster industry has not let dust grow under their feet. Most of the manufacturers have introduced carry rigs for these popular pistols, which is a real plus for those of us who are concerned about our personal security and want something with some oomph coming from the muzzle. The choices in carry mode are diverse—if you can’t find one that meets your real-world needs, you haven’t tried hard enough. The first to release a holster for the popular LC9 was Fobus; the Israeli manufacturer got one of their molded polymer paddle rigs to the market almost as fast as Ruger introduced the gun. Fobus holsters do the job at a very reasonable price, which is important in today’s economy. 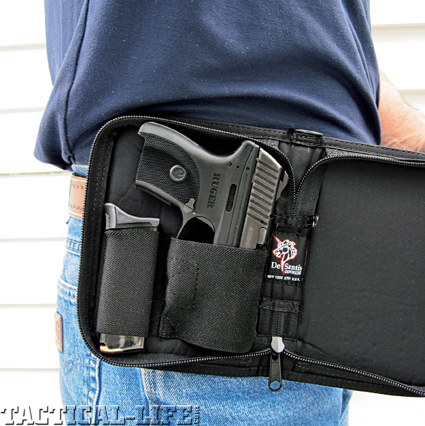 While the DeSantis EZ Rider might not be your “cup of tea” as a belt holster, many may notice it but few will see it for what it really is.