by B Gil Horman
in Combat Handguns, Guns, Handguns
0

0
SHARES
56
VIEWS
Share on FacebookShare on Twitter
The Turkish-made Regent R100 1911 from Umarex is a classic-style 1911 designed to provide shooters with a top-quality pistol with no unnecessary frills.

Undoubtedly among the most ergonomically designed pistols, the 1911 was designed as the successor to the .45 Caliber Colt SAA used successfully by the U.S. Cavalry. As he did with all his designs, John Browning imbued not only excellent ergonomics but also a “synergy” that allows the parts to work in unison to deliver outstanding performance.

I received my first 1911, a Spanish clone actually, as a gift from my wife forty years ago. As basic as can be, it was my own 1911, just like everyone was talking about in the gun magazines (thanks to Colonel Jeff Cooper). I still have it, residing in my safe with—well, let’s just say a few others. 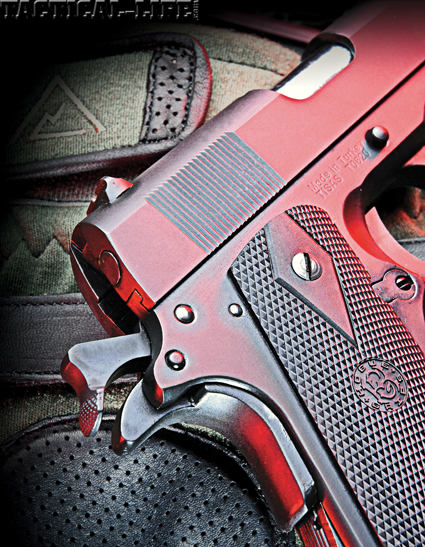 Keeping with the basic, no-frills theme of the design, the Regent R100’s grip safety does not feature an extended beavertail sweep at its top.

I eventually added a Colt Series 70, again thanks to my bride. (See a trend here?) As were all the off-the-shelf-1911s of the time, this Colt was plain-Jane. Let’s get this straight, though, by that time functioning plain-Jane 1911s had dropped many a bad guy into a grave during military activities, law enforcement difficulties, and civilian self-defense shootings. That continues even today, although most 1911s roll off the assembly with more features than I had on either of my first two John Browning-inspired pistols. 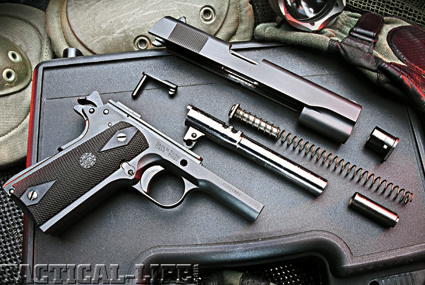 The author found that the Umarex Regent R100 was a tried-and-true 1911, with the familiar breakdown procedure and parts interchangeability with a Colt 1911 pistol he had on hand.