When practicing our scenario match program we always try to work in a few exercises that involve the use of cover, space and distance. The idea is to force the shooters to think about these issues, even when they might not be aware of what they are doing. It is up to the training officer or match director to pull this off successfully. But, to form good shooting habits and tactical awareness the exercise must reflect what actually happens in a real world confrontation. You must work to keep things as realistic as possible. 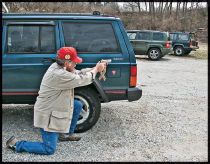 What do I mean by keeping things realistic? First, keep the range short, up close and personal. An attacker must get close to do you any harm. Present only a few hostile targets, and mix in an occasional bystander, so that the shooter must be aware of anyone that might be in the line of fire. In a straightforward defensive scenario, make it short and brief. As Mike Harries, an old friend and an early pioneer of practical shooting used to say, “If you want to keep it realistic, make it up close, and quick and dirty!” That is the way it will happen on the street.

While you are at it, mix in a little nearby cover, work to gain a little space, and try to engineer the situation to keep as much distance as possible between you and your attacker. Space or distance means time, and that may give you a few seconds to realize what is happening and decide how to respond. In addition, most criminals are poor shots, so the greater the distance the less likely he will be able to hit you. Concerning cover, if it were only a step or two away it would be foolish not to take advantage of it. But you must be aware that it is there, and have the presence of mind to use it quickly. This is why it must be included in any good training or match program.

Another option is to use any handy object as an obstacle to keep your attacker away or to slow him down. Put any object that’s handy between you and any suspicious character. Substantial things such as a parked car, a brick wall, or trash hopper will also stop bullets—another plus. Even things that won’t stop bullets, such as a chain link fence, hedgerow, or even a drainage ditch can be used effectively to slow down an attacker or keep him away altogether.

Try to work in a few natural terrain features from time to time. When on the range such things as standard barricades are often used to simulate wall corners and so on, while empty barrels can replicate low cover. This is good, but it is all pretty much cut and dried, and after a few range sessions the shooter knows what to expect and how to handle it. We try to work in a few unusual or non-standard forms of cover and concealment from time to time, just to force the shooter to cope with the unexpected. These could take the form of a mound of dirt, a handy tree trunk, a parked car, etc., all of which represent hard cover that will stop bullets. Concealment, on the other hand, could be represented by a large clump of weeds or tall grass to conceal your position. But none of these can stop or deflect bullets. Both can be useful, but you need to keep in mind the difference between the two.

When setting up these exercises don’t let the shooter get into position to try them out beforehand. The chief value here is to make the shooter learn to cope with a strange or awkward position while under some time pressure and the eyes of his peers. Here are several other points to think about. Avoid the natural inclination to crowd tight against the cover. Just stay back just a bit whenever possible, so that you have a better view of the area in front of you. Keep your hands and weapon back from the edge, so they will be better protected from any bullets striking near that corner. It is not a good idea to peer repeatedly around the same spot. There are a number of cases on record where an opponent had observed this, aimed in on that spot and simply waited for his foe to reappear, before firing a deadly shot. When using a car for cover, try to utilize the tires and wheels to protect your legs and feet. If you can’t use the tires, stay on your feet so that only they and your lower legs are exposed to any bullets skipping off the pavement. In no case is it a good idea to go prone on any hard pavement without some cover in front of you. Any bullet or buckshot load that strikes short of its target on pavement, and at a shallow angle, will usually ricochet along just a few inches above it. This will almost guarantee a hit on anyone lying on that pavement so long as they are in line with the bullet’s path.

Now, when on the range you don’t have to worry about any of the above mentioned problems; you are not really being shot at. But how you practice and train on range will program your response when put under the sudden and severe stress of a life or death confrontation. Your subconscious mind will take over, and generally you will do what you have practiced on the range. The training officer or match director should stress the point that you must always try to solve any problem in training or competition with techniques and tactics that would actually be used on the street. If you try to “game” the problem and only look for any edge to win on the range, your performance might make you feel good. But without any regard for tactical reality, you could be setting yourself up for disaster. The way you practice on the range is the way you will react on the street. Always practice and work to form good habits to preprogram that subconscious mind. This will improve the odds that you will make the right response when under stress.

The scenario is intended to give the reader a few ideas on how to set up a training scenario or practical match stage that simulates the conditions that are found in the real world. Use it a few times, make some modifications, or make up your own. The one thing you must keep in mind is that the challenge must be realistic, and not just a tough shooting challenge. Keep the range short, not too many targets, a bystander or two from time to time, and make the shooter identify the threat before shooting. While you are at it, don’t forget to throw in a little quick movement to gain some space or avoid an attack, and the use of nearby cover when possible.