The Walther PK380 is both a revolutionary and an evolutionary gun. In either instance this new Walther .380 semi-automatic has some very historic shoes to fill. It is the first all-new Walther pistol to be chambered in .380 ACP since the Model PP was introduced 80 years ago in 1929. The successors to the original Model PP – the PPK and PPK/S (a combination of the PPK slide with the PP receiver) are still being manufactured more than 78 years later, and neither has seen their popularity decline since 1931 when the compact Model PPK was added to the Walther line. With a production run that any armsmaker would envy, one might wonder why Walther would tempt the fates, and favorable ones at that, with a new .380 ACP pistol. The answer is, quite simply, you asked for it. 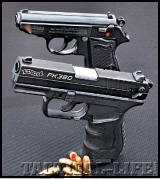 Walther established the precedent in 1995 when it began importing the innovative 9mm Model P99 into the US. The P99 has since become one of the most reliable sidearms in the world. In 2001, Walther took the P99 design principle and applied it to a .22 LR semi-automatic, the P22, now one of the most popular .22 autos in the world and offered in a variety of configurations including compensated target pistols and sporting models equipped with a Picatinny rail mounted red dot scope. People simply love the Walther P22 for its rugged design and ease of operation. The only thing missing, lamented many, was a P22 chambered in .380 ACP. The wait is over.

Gun Details
The PK380 is a slightly scaled up version of the P22 with virtually the same feel, balance, and operating features. Longer at 6.5 inches (versus 6.3 inches); taller at 5.2 inches (versus 4.5 inches), with a 1.2-inch versus 1.1-inch variance in width, the PK380 has a slightly deeper grip and more pronounced finger grooves. The larger grip design allows the gun to comfortably fit most hands. In our case the bottom of our thumb could rest atop the first joint of the second finger—a generally ideal grip. The third and little finger also firmly wrapped around the tapered combat-style finger grooves.