In the late 1990s, Walther’s original P99 caused a stir in what was largely, until then, a market that considered “polymer” a synonym for one of Austria’s leading national products. If you mentioned “light,” “hi-cap,” “polymer,” and “striker-fired” all in the same sentence, there just weren’t enough other pistols out there to leave much room for confusion. The situation’s quite different today, but just before the turn of the century Walther drew quite a bit of attention for attaching “plastic” to the venerable company’s name, and kicking poly pistols up a notch…or two.

The P99, still carried by Walther, did the usual stuff with a hammerless striker, a 15-round magazine (in 9mm), 3-dot fixed sights, and that lightweight lower, but added to the foundation with a unique magazine lock lever located on the triggerguard’s rear, an elongated decocking “button” set into the top of the slide and an ergonomic grip section with inserts that could actually make the gun fit nearly any adult-sized hand comfortably. The partially pre-cocked QA (Quick Action) trigger was just that. As it was, the P99 sold well enough to justify a .40 version later, a P99AS (Anti-Stress) trigger variation, compact versions, the P22 hammer-fired rimfire pistol, and now- the PPQ. 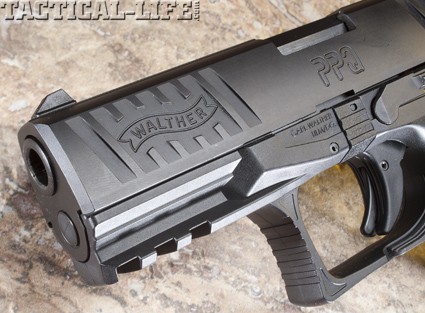 Gun Details
Carrying on a tradition that leads back to the 1930s, Walther continues to apply model names with catchy abbreviations, and the PPQ is no exception. PPQ is a bit more convenient in normal discussion than Police Pistol Quick, I suppose. Anyway—the new PPQ is the latest evolutionary step in P99 progression, and “quick” certainly applies.

Outside, the PPQ shows the same general and instantly recognizable P99 profile, with a few changes as you look closer. While the takedown catch, magazine levers, and grip inserts are still in place, and there’s still no magazine disconnect, there are front slide serrations now, a longer accessory rail with three slots instead of the current P99 QA and AS single-slot rail, a trigger with an Austrian-style pivoting “safety” lever in its face, an ambidextrous slide lock lengthened to two inches, an inwardly “hooked” curve up front on the triggerguard instead of the current P99 outward curve. The de-cocking button’s entirely gone, along with the cocking indicator provided by the rear end of the striker extending through the back of the slide. The PPQ’s loaded chamber indicator, shared with the other P99s, is a section of red paint visible inside the extractor cutout in the slide when a round is chambered, and the new pistol’s grip area uses what Walther describes as a “Cross-Directional Textured Tactical Grip” surface, which is totally different from anything on previous P99s. Sights are polymer 3-dot adjustables, and the PPQ uses the same mags as the other P99 models; 15-rounders in the 9mm (optional 17-round available) and 12-rounders in the .40 S&W (14-round available). The double-stack magazines are black, with easily removed polymer baseplates for cleaning and witness holes on the rear, instead of the sides. Inside, the PPQ includes the passive firing pin safety found on most new service-type pistols’ slides, and between it and the trigger safety, the design is both accidental discharge and drop resistant. 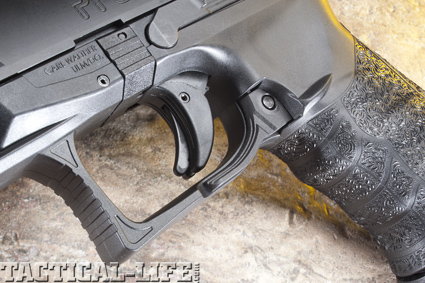 And, if you’re a fan of quick trigger resets, you’re going to love this one.

With the increasing emphasis over the past decade or so on rapid fire during defensive engagements, the length of travel (and corresponding time) that a trigger uses up in returning to a point where the hammer or striker and trigger/sear engagement are all back in a full firing position has generated much attention. Current training in police and defensive handgun schools leans toward taking full advantage of the autopistol’s ability to provide rapid successive shots on target in a very short time frame. In that context, the shorter the distance the trigger and trigger finger have to travel forward after firing before a follow-up pull will fire the pistol again, the faster a competent shooter can run the gun. While speed isn’t the only criteria in defensive fire, it certainly can be an important one, and the PPQ has it in spades. In fact, it should really have been named the PDQ, for obvious reasons. With a trigger reset of only 0.01 inches, it’s the fastest reset going, and you’ll need to try one in hand to see what it offers. Walther has obviously taken the current interest in resets very seriously with what they call the Quick Defense Trigger (QDT, in Walther-speak), and besides the short travel the trigger also tells your finger quite positively when the clickpoint is reached, with a corresponding audible signal that my fading ears can even pick up through a set of range earmuffs. 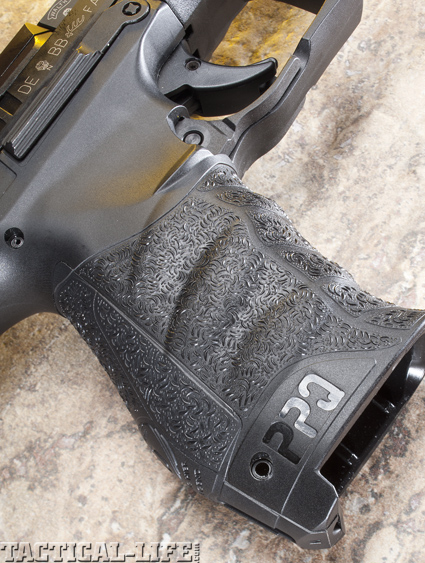 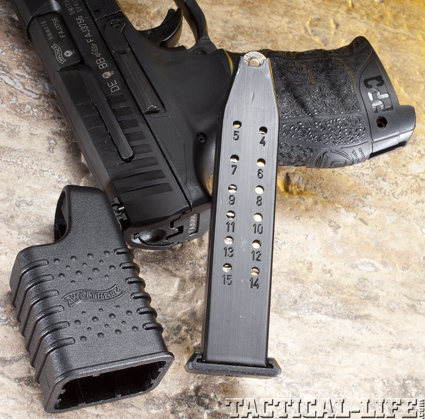 Smith & Wesson handles US distribution of certain Walther pistols (the P99 variations are made entirely in Germany by Walther), and on the S&W website the PPQ’s QDT is described as being a “100% Pre-Cocked Striker”. In talking to a company spokesman about that description, I was given a “…maybe 98% pre-cocked…” figure, and the reason for that has to do with a safety aspect. If the pistol’s action were truly 100% cocked, the possibility of an accidental or unintended discharge could increase. At 98%, the trigger requires slightly more effort by the shooter and fractionally farther travel before let-off on the first shot, and doesn’t affect the pull weight noticeably at all. The weight, in fact, on the test sample was 5.5 pounds with the hook on my gauge positioned in the center of the vertically serrated trigger face’s arc, just what the factory says it should be. Beyond the initial take-up of the two-stage pull, the break was clean, with no overtravel, and the wider-than-normal trigger helps in making the pull seem lighter. 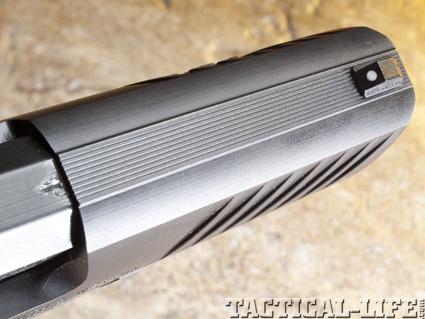 Range Time
At the friendly neighborhood gravel pit range, the PPQ did OK by Walther. Holding best 5-shot 25-yard groups with six out of seven 9mm loads tested at or under 3 inches off a slow-fire pistol rest, Winchester’s 147-grain Silvertip JHPs squeezed out a reasonably well-rounded 1 13/16-inch showing with one lone flyer that managed to escape the red target center. The sights were already well-centered, adjustables are a bonus in zeroing to a particular load. The rear notch is relatively shallow, but the dots show up well in many light levels, and there’s enough white on each side of the front post for more precise aiming. I’d prefer a little more height on those sights, and steel, but at least they don’t create a cramped sight picture. These are apparently the only sights Walther’s planning, as of now. 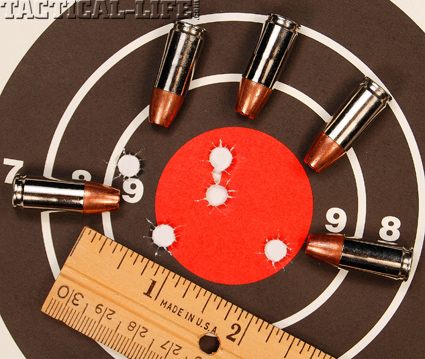 In The Hand
The PPQ’s grip is extremely comfortable in the hand, the best of any pistol I’ve ever fired. I used the middle-sized insert for all testing, and found the combination of ergonomics and 9mm caliber played very well together in making the Walther a pleasant and controllable pistol both on the bench and on foot in rapid-fire; even with +P loads, which the Walther’s fully rated for. On a B27 black silhouette after the accuracy session, the PPQ was easy to shoot, easy to hang onto and easy to keep in the black at 7 yards during speed dumps. Yep—there’s that speed thing again. 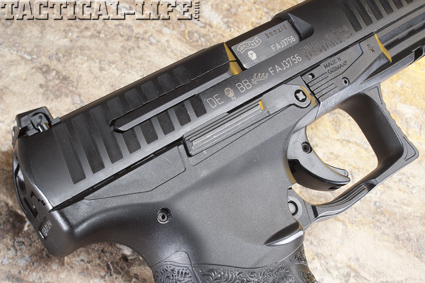 As an old revolver guy, and one who runs through all sorts of trigger types and travels each year in testing guns for a living, I’ll say that this pistol will require a bit of a learning curve. The PPQ is truly ambidextrous, with its dual mag and slide lock levers, which is a positive. Reverting back to the same cautionary note I made when I covered the first P99 for review—if you plan to carry a PPQ on duty or privately, it’s in your best interests not to be switching around to other pistol types. I’ll repeat that if you burn a couple thousand rounds a month downrange with a 1911 at IPSC events, the Walther is probably not a good choice for your carry gun. The location and operation of the mag release are just far enough beyond the norm to require some muscle memory re-training to become automatic for reloads under stress, which is the downside, but the upside is that they can be operated by the trigger finger of either hand without having to swivel the pistol in the hand for the thumb to reach the commonly located mag release button. The PPQ isn’t difficult to learn, it just needs some dedication to mastering its personality. Then too, that trigger will flat spoil you for most other designs—especially if you’re used to a revolver or DA pistol.

Having worked with previous incarnations, there’s no hesitation in saying I think the PPQ is the best of the bunch. I don’t miss the de-cocker at all (just something else to add complexity), the new grip texture and light palmswells on both sides are an improvement, ditto on the slide locks, and there’s no loss at all in not retaining the older cocking indicator, since you merely assume the pistol’s always cocked anyway (or at least 98% cocked) and treat it accordingly. If you’re trading in a previous P99 version to upgrade, your spare mags will still fit and function just fine in the new Walther, and the squared trigger guard shape may fit in a holster you already have. You may also get a stronger attachment with a light or laser on the longer rail, and possibly more mounting options. 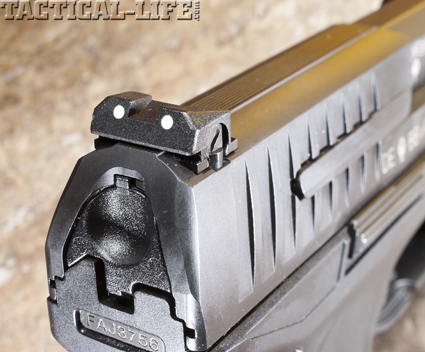 Right now, there are no alternate finish colors or sizes planned, but the door is always open to a specific limited distributor run, and hopefully there’ll be a compact version in the works soon. The existing P99 Compacts are already fast and controllable little guns for backup or concealed carry, and an equivalent PPQ should be even more so. The S&W website at www.smith-wesson.com has more info, so does the Walther America phone number at 800-372-6454.