0
SHARES
34
VIEWS
Share on FacebookShare on Twitter
Warning shots send a bullet out of the barrel, and that bullet will land somewhere. If you’re watching the suspect, how can you be sure your warning shot won’t land somewhere it shouldn’t?

Serious students of armed defense know that the “warning shot” is a bad idea, an act expressly forbidden by most police departments insofar as their own officers’ “rules of engagement.” Unfortunately, much of the public and apparently even some members of the bar have not gotten the word.

You would think a law school graduate and a veteran prosecutor would know that warning shots are not a good thing. Yet last summer I testified as an expert witness for the defense in what I’ll call Case One, in which a woman had to shoot her estranged husband in self-defense after he violently attacked her and beat her to the ground. She was criminally charged with Manslaughter. The prosecutor made a huge deal out of the fact that the single gunshot wound sustained by the deceased was fired into his torso, and he railed histrionically to the jury that the fact that she hadn’t fired a warning shot, or shot to wound, was evidence of guilt. The defense team explained the matter, and a wise and attentive jury very quickly found her Not Guilty of all charges. Yet, I was appalled that in the year 2011 an officer of the court could make an argument so out of touch with reality.

It happens, and the lesson is, you may have to explain why you didn’t fire a warning shot. A few years ago in a famous incident in Arizona, Case Two revolved around a retired schoolteacher who was attacked by two large dogs as he finished a hike at a trailhead. He fired two warning shots from his Kimber 10mm pistol, which alarmed the animals enough that they did indeed break off their attack. However, their owner—a person diagnosed to be mentally ill, and with a long history of violent, unprovoked assaults—attacked the older man, who shot him in self-defense. The defender wound up convicted of a wrongful killing, and spent considerable time in prison before winning an appeal. The prosecutor chose not to take him to court again, leaving him a free man, but he is still hundreds of thousands of dollars in debt after his long legal battle.

That particular case is best known for the fact that the prosecution demonized his use of a supposedly too-powerful 10mm pistol and hollow point bullets, convincing the jury that these things were indicators of evil intent. However, I’m told by those close to the case (I wasn’t involved myself) that the prosecution also argued that he fired warning shots for a dog, but didn’t care enough about human life to fire warning shots for a man. That’s an eye-roller, right there. The warning shots that did in fact deter the dogs obviously did not have the effect of warning the man who owned them: indeed, he attacked the defendant because the defendant had fired the warning shots in the first place.

There have certainly been cases where warning shots worked. I had the privilege of knowing the late, great gun writer and career lawman Charles “Skeeter” Skelton. Charlie wrote of a case where he faced a psycho who was terrorizing a store with a large knife. Charlie took the man at gunpoint, and ordered him to drop the blade. The man refused. Skelton then fired a .44 Special bullet from his Smith & Wesson into the wooden floor, between the man’s feet. At that point, the individual instantly “got religion,” dropped the knife, and surrendered without further ado. This, I would submit, is an example of a successful warning shot worthy of being called Case Three.

As a young patrolman in the early 1970s, I was the first responding officer to Case Four, a scene where an armed citizen had driven off a home invader. Hearing his wife scream when the man came in, he grabbed a little Walther pocket pistol and took the man at gunpoint. The suspect backed out the door screaming threats. The wife took this opportunity to run and grab a 12 gauge shotgun, which she quickly brought to her husband. The man of the house grabbed it and discharged a round deliberately into the air, and the home invader then turned and fled. The “warning shot” had finally convinced the violent intruder that he had suffered a “sudden and acute failure of the victim selection process.”

So, yes, warning shots have been known to work. However, they are not the wisest tactical approach. Let’s look at some of the problems with warning shots from the tactical side.

Remember that warning shots deplete your ammunition. In Manila, an off-duty policeman was alerted by screams from a nearby marketplace, grabbed his six-shot Smith & Wesson .38 revolver, and ran to the scene. There he encountered a maniac who had gone berserk and was slashing innocent people, wielding a knife in each hand. He fired a warning shot, but it only served to focus the madman’s attention upon him. As the guy came at him with the two knives, the officer fired two more shots skyward. These were likewise ignored, and now Case Five went downhill. Turning and running, firing over his shoulder, the cop triggered his last three shots at the suspect, but missed. His feet crossed and he tripped and fell, and the man was on him like a Dervish, stabbing him madly until he was dead. Responding on-duty police officers shot the crazed blade-man to death, but it was already too late to save the life of a good, brave man who had wasted half of his entire ammunition supply on warning shots. 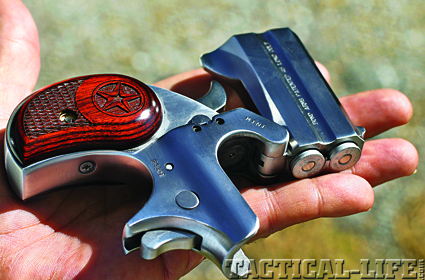 Warning shots also deplete ammo. If you’re packing a two-shot Bond Arms derringer, you might need to conserve your rounds

Another “warning shot warning” is, the warning shot’s bullet has to come down somewhere Only a few months ago, in Case Six, a hunter during muzzle loader season fired his hunting rifle into the air to unload it. The bullet came down a great distance away, striking an innocent teenage Amish girl and killing her. No, it wasn’t a warning shot, but it shows how a bullet fired skyward can extinguish the life of an unseen innocent victim. Have such things happened in “warning shot” incidents? Yes! Case Seven took place in New England: a defender apparently “tunneled in” on his opponent raised his handgun up out of his line of view and fired what he thought was a harmless shot into the air. The bullet directly struck and killed a person standing on the upper floor porch of a tenement building, out of view of the tunnel vision of the well-intentioned man who thought he was only making scary noises.

The warning shot is hoped to be a very loud warning that says, “Stay away! Don’t keep doing the bad thing you are doing!” What I’ve come to call the “chaser shot” is fired to send the message, “Keep running away!” or “Don’t come back and attack me again!” The shot fired by the homeowner in Case Four would fit the “chaser shot” category. In a community adjacent to the one I served when I responded to Case Four, I later consulted on Case Eight. A retired physician confronted a burglar and when the man lunged at him, fired with a .22 revolver. Not fatally wounded, the burglar spun and ran. The doctor felt an urgent need to make sure the man did not come back at him, so he fired a second shot to send the message, “Keep going!” Unfortunately, that bullet struck the man in the back, piercing his liver, and proved fatal. The result was a costly legal nightmare: the doctor kept his freedom, in the end, but lost a great deal of money and a great deal of peace. 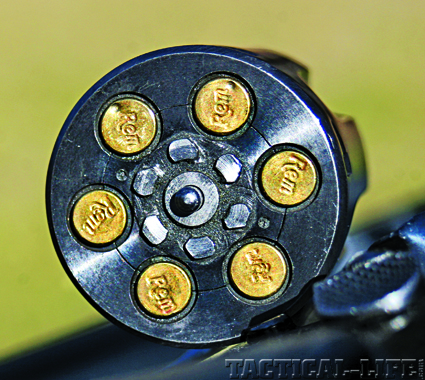 Of the two shots fired from a .22 revolver in Case Eight, it was the warning shot that caused the controversial, ultimately fatal wound.

More recently, Case Nine took place in the Southeast. A young man was violently attacked in a driveway—as he tried to exit the scene, and when the side window of his car was smashed in by one of his multiple assailants, he came up with a .38 and fired, stopping the attacker, who died from the gunfire. As he backed into the street, he fired again into the air. He said later that he did so to keep them from harming him. That single bullet, intentionally fired upward, buried itself harmlessly in a building. A skilled defense lawyer won him an acquittal on the grounds of self-defense for the fatal shooting itself, but the jury found him guilty of the lesser included offense of recklessly firing that last shot, and he wound up serving hard time with a criminal conviction on the record for the rest of his life.

The bottom line is, there are good reasons why police are forbidden to fire warning shots, and why wise armed citizens don’t put the warning shot in their repertoire of defensive responses. Be able to explain why you didn’t fire a warning shot…and share with those who seek your advice why they shouldn’t fire one, either.