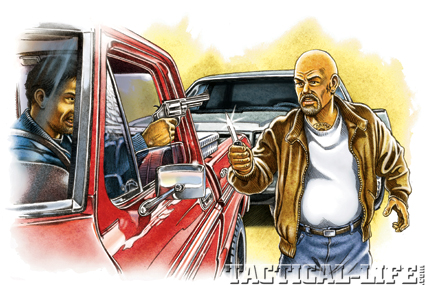 STREET CURB SHOWDOWN
I had been hired by the state as a correctional officer and was on my way home from work on the swing shift. Recently, we had been informed that our names and addresses had been obtained by a white supremacist gang in the state and to be cautious driving to and from work. We found out later that a woman working for the state had given the names and addresses of many on the staff to the Aryan Brotherhood, including mine because I worked in a security housing unit as a yard gunner that housed several Aryan Brotherhood members.

Because of the danger, I made sure that I wore a “cover” over my uniform while driving. I also made sure that I was qualified with my concealed carry weapon. About three miles from my home, I noticed a pickup truck that had been behind me for a while. I decided to change directions just as a precaution. The truck changed direction with me and accelerated to just behind my pickup’s rear. I sped up a little and turned right onto a street that I wasn’t familiar with.

Suddenly, he sped up and forced me over to the curb. Unfortunately, I wound up right behind a parked car with his truck behind me. My window was partially rolled down, and when I tried to roll it up, the window jammed. The man was about 5’11” and as he approached my truck, I prepared for a confrontation. He kept approaching me and began yelling at me—that he “knew what I was about” and he had been looking for me. I told him that I didn’t know him and to go away. He swore several times and said, “You’ll be sorry.” Then he reached behind his waist.

As he did this, I reached inside of my jacket for my concealed weapon. It was a Smith & Wesson 629 .44 Mag. He pulled out a long knife. As I saw the knife, I leaned away from him a bit, to put a little room between us, drew the gun up to the window level and said loudly, “Go away now!”

I know all he saw was the business end of my .44 Mag pointed right at him. His eyes got as big as silver dollars. He stepped back and said, “Hey man, I don’t want any trouble.”

I said, “Go away and there won’t be.” He ran back to his truck and left. I’ll never forget that evening when having my concealed carry weapon saved me from certain harm.
—WC, CA

Christmas almost didn’t happen for us, thanks to a couple of stereotypical punks. My wife and I were getting some last minute stocking stuffers the Thursday before Christmas weekend at the local K-Mart. As we headed back to our vehicle, from the distance we noticed two guys at our car. One was at the trunk, the other at the driver’s side, appearing to be a “lookout.” I heard my wife say, “I’m calling the cops.”

Getting a closer look to make sure we not misinterpreting the situation, I approached the car beside my own from the passenger side, and set the bag on the car’s trunk, like if it was my own. The guy at the trunk was trying to pry the lock with a screwdriver. The few bags in the back seat of my car must have made them think there were more goods in the trunk.

This guy actually looked right at me and said, “I must’ve dropped my keys in the trunk when I put my sh** in there,” with a hint of menace. I just nodded my head, and stepped back to the passenger side of the vehicle beside mine. Concerned for our safety, I made sure I had access to my Beretta 92FS. The guy at the trunk stood straight up, and with an angered look on his face did a stabbing motion with the screwdriver.

Out of nowhere, I heard my wife yell, “Don’t you move!” I glanced over and she had her Bersa .380 pointed at Mr. Lookout (by the way, yes—we are both licensed to carry). Right on cue, we see yellow lights whirling. Mall security was in the right place, at the right time. A few seconds later, we saw red and blue lights whirling. The township police station was literally three blocks away.

Guns were drawn on us initially, since we seemed like the perps—but after some questioning, verifying our carry permits, and that the vehicle was ours, we got to go home, and I thank God, that the only damage that night was to the trunk of my car.
—JT, PA

My brother had been in the hospital several weeks. I had been driving the 55 miles every day to check on him as he had undergone cancer surgery. I was very tired and not paying close attention one day as my low fuel light came on. Well, I was very relieved when I got to the diesel pump instead of running out on the road.

He was insisting that I give him money. He was talking very fast and appeared to be on something. He kept asking for money, he needed some money and he repeated that over and over several times. I explained to him that I had no money to give him and that I was only getting fuel on my credit card. I told him to go away and leave me alone, but this man would not take no for an answer.

Finally, after he asked again for money and pushed in even harder on my leg, I told him, “Okay, wait just a minute!” I just remembered that sometimes my wife will put some money inside the console. When I said that he relaxed and stopped pushing in on my leg long enough for me to turn and open up the console.

I began to feel as though I were in significant danger, so as I reached inside I got my Bond Arms Snake Slayer .45 LC/.410 out that I carry every place that I go loaded with 3-inch .410 shells with 000 buckshot in it. I pulled the hammer back as I pointed it right in his face and said, “Now you SOB, get away and leave me alone or this old man will shoot you!” That guy just took off running! Since then, as I have told this story many times, I have been told that the same tall man regularly works that same gas station. We’ve seen him again from a distance.

You see, about three years prior to this incident I had undergone a five-bypass heart surgery and then three weeks later developed a staph infection from the surgery. I then had surgery again to have most of my sternum bone removed. They removed the sternum that had staph in it to try to get rid of the staph. I’m very lucky to even be here and one good blow to my chest and it would all be over for me.

That’s why my Bond Arms Snake goes with me wherever I go. My saying is, “If I’ve got my britches on, then I have my Bond Arms with me. I’m too old and fragile to take a butt whooping.”
—DT, TX

A few years ago, I decided to take advantage of the warm summer night by going for a brief bike ride through the neighborhood. I pulled the bike out of the garage and headed off, pedaling through the dimly lit side streets that made up my town. I stopped at the local convenience store for a quick coffee. Standing at the far end of the counter, directly across from the doors, I slowly stirred my coffee awnd made small talk with the night clerk. Johnny had worked there for a few years—friendly to his regulars, but always on his toes.

I heard the doors open as someone walked up to the front counter. Then I heard Johnny ask, “Hey, is that a gun?” Immediately and unconsciously, my hand moved toward the Glock 23 underneath my t-shirt. My eyes, in slow-motion, scanned up to see the man Johnny was talking to. The man appeared to be in his mid-20s and his eyes matched my gaze as Johnny’s question hung in the air between us. If robbery was his intention, he apparently noted Johnny’s and my collective reaction of calm, resolute opposition to his plans and he suddenly bolted back out the door and sprinted off into the night. I don’t know what would have happened to us that night had I not been armed and able to confidently defend myself, if it had come to that.
—DP, IN 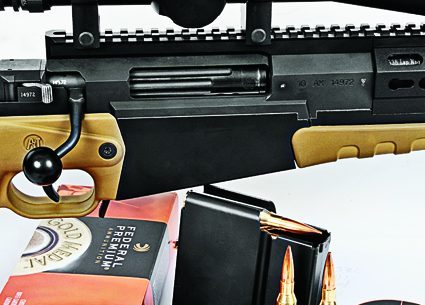