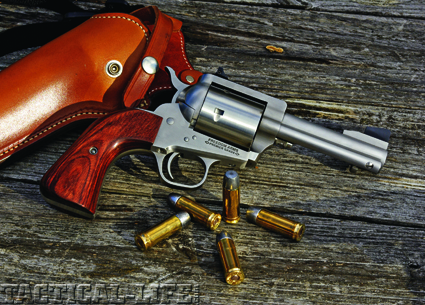 The Freedom Arms .500 Wyoming Express handgun packs a lot of power in a handgun that fits easily in a holster. This is the 4.5˝ barrel Model 83.

With the recently enacted rules that now allow carry guns in national parks (if applicable state laws grant that right and are correctly followed) more and more people will be bringing personal protection into the wilderness with them. But, the requirements are much different once you leave the pavement. With urban carry, our primary concern is bad guys and the choice of carry guns would reflect that. In the national parks and other wilderness areas we must still be concerned with predatory humans, as dirt bags are everywhere humans tread, but we must also consider the bigger and tougher four-legged predators.

The odds don’t favor you ever needing to use the handgun for protection, in the wilderness or in town. But, sometimes the odds catch up with you and that gun may be the thing that saves your life. The dangers from wild animals, both two- and four-legged, are pretty diverse in the wilderness, but if you plan for the “worst-case scenario” that is the biggest and toughest critter you may have to deal with, the rest will follow along nicely.

Wildlife Attacks
Mountain lion attacks have become rather common in some places. Another emerging and surprising danger is coyotes, and just recently a pack of them killed a young lady in eastern Canada. Wildlife experts say they will never attack, but clearly they are wrong. Things are changing. Wolves are making a comeback as a threat in many areas. There have been a bunch of documented attacks, including one recently in Alaska where wolves killed a schoolteacher. Coincidently, I was hunting brown bear less than 20 miles from the scene of that attack just a few months earlier. I saw a lot of wolves and had planned to try and shoot one, but it didn’t work out. I regret that now.

It’s more likely in the lower 48 that you will deal with rabid critters or perhaps a rogue dog. Twice, rabid animals have chased me. The first was a rabid skunk down in Texas. It’s pretty easy to outrun a skunk, but after half a mile of him chasing me I decided I had run enough and ended his days with a .480 Ruger.

The next time, I was hiking near home as part of a fitness program prior to a sheep hunt. That day a rabid coyote decided to mess with me. I had a pocket .380 and I shot several times at that coyote as it approached without scoring a hit. Finally, I waited to let it get very close so I could hit it with that little belly gun.

For most wilderness carry other than the Rocky Mountain areas or Alaska, unless you are in moose, black bear or wild hog country, your favorite carry gun should be fine. But only if you elect to carry a good fighting gun to start with. Forget the pocket .32 or .380 autos, they are too small and hard to hit anything that’s not already chewing on something you value. With a .38 Special +P or larger revolver, or a 9mm or larger pistol, you are in pretty good shape for dealing with bad guys and bad critters up to the size of a mountain lion, particularly if you use heavy bullets. I believe the old adage; “Never bring a handgun to a fight unless the name starts with a four,” and my choice is usually a Glock 22 in .40 S&W loaded with 180-grain hollow points, or a 1911 .45 ACP with 230-grain hollow points.

If you live in the east, in most locations the biggest predator you will deal with is a black bear. They are timid and avoid trouble as a rule, but rules are meant to be broken. The one time I should have shot a black bear with my carry gun, I forgot. I had a .454 Casull in a crossdraw holster when the bear came for me. Both hands were busy, although I could have let go and grabbed the gun. I tripped on a log while backing up and fell backwards just as the bear tried to run me over. All those years of martial arts must have left some muscle memory because I kicked at his nose. That set him back on his butt and gave me a few seconds to retreat. I had the right gun on my belt, but it happened so fast I didn’t use it.

Penetration Issues
Other than moose and black bears, the other exception to using our urban carry guns in wild places, particularly in the south, are feral pigs. They can grow big and be tough. If you were traveling in their country I would lean toward something a bit bigger. I once had a buddy who tried to shoot a large Florida wild boar with a high-capacity 9mm. During a running battle he emptied three magazines at the pig. By the time I got there my buddy was “treed” on a large brush pile, with an empty gun and a very pissed off pig wearing a rut as it circled him. I put a 250-grain .44 Mag through the hog’s chest to change his plans. We later dug eight 9mm slugs from him. One was about 6 inches into his guts and the others all stopped in the gristle shield on his back and shoulders. I know about a fool who tried to kill a black bear with a 9mm and with worse results. It’s simply not enough gun for this work.

A .45 ACP with 230-grain hardball would work. I have seen them used on boars several times. I also have a hunting buddy who has shot bears with one. It wasn’t spectacular, but it got the job done. The reason for hardball is because the more common self-defense ammo will not penetrate deep enough.

Much better, though, is a revolver starting with a four, as in “.41 Mag” or larger. When carrying a revolver in the wilderness, do not rule out cast bullets. They penetrate very well on big game and they can take out a bad guy if needed. In an urban setting the over-penetration issue is serious. You don’t want to shoot through the crud in question and kill a good guy on the other side. But, in the wilderness, usually you have trees and rocks on the other side of your target, not a kid on a tricycle.

One noted wildlife expert I know claims that the most dangerous animal in North America is a cow moose with a calf. A very big one can weigh close to 1,000 pounds. So can a big grizzly or brown bear, so if you travel where they live, a big wheel gun with heavy cast bullets is by far the best carry handgun.

Real Life
A lot of so called “experts” say that having a handgun will only make things worse in a life or death grizzly bear situation. I fail to see their reasoning. If a bear is attacking me I don’t see how a handgun is somehow less appropriate than my fists. “Play dead?” Not in my nature. I am going to fight and I would much rather have a pistol than nothing. Remember the bear “expert” Timothy Treadwell and his girlfriend in Alaska? They believed in “playing dead” and now they are.

My thinking is that when a bear is tugging on our boots, no gun is going to be big enough. I think it’s best to use at least a .44 Mag. Why? Because they don’t make an .88 Mag. My bear country carry gun, the one I had when I went hand-to-hand with the black bear, is a Freedom Arms .454 Casull that has been customized by Ken Kelly at Mag-N-Port. I designed it specifically as a wilderness carry gun. It has a 5-inch barrel and carries very well in a cross draw holster, even on a horse, ATV or in a vehicle.

On my last couple of Alaska trips I used a 4-inch barrel Freedom Arms Model 83 in the newer .500 Wyoming Express cartridge. My loads were 400-grain cast bullets at 1,400 fps (feet per second), which I think would stop a T-Rex.

I am truly at home in the wilderness, but I am only at peace when I have the right gun. Now that carry guns are legal in many places, life feels much safer. 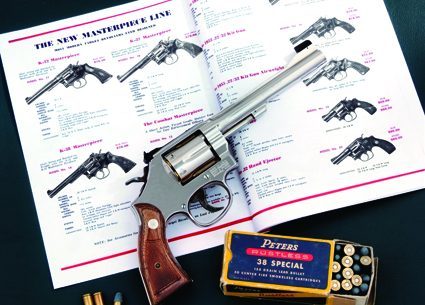 The Freedom Arms .500 Wyoming Express handgun packs a lot of power in a…