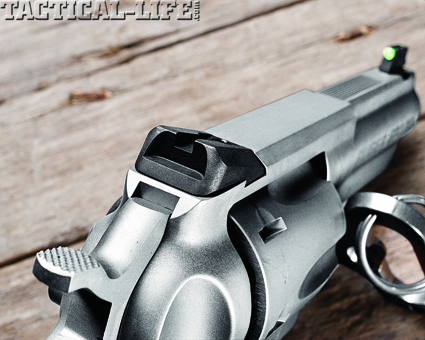 The flat black Novak rear sight is more than just a novelty—it helps pull the eyes to the fiber optic front sight for quick and easy acquisition.

Wiley Clapp is a grumpy old curmudgeon who is, undoubtedly, the smartest man I know in regards to handguns. While attending a writer event at Gunsite several years ago, I was riding back to the hotel with him when I initiated a discussion on the Browning Hi-Power. I have owned several and read extensively, so I felt more than adequate to discuss the virtues of the gun. Wiley corrected a few of my assertions and then launched into a 30-minute long discussion of the gun, its history, design characteristics and how the gun could be improved. “Discussion” is the wrong word as I just sat and listened, because when I talk I don’t learn and I obviously had a lot to learn in this case.

Wiley has been writing for the gun press as long as I can remember and is someone that everyone in the industry respects. With a background in both the military (a Vietnam Marine with combat experience) and law enforcement (a deputy in a large California Sheriff’s Office), Wiley knows both combat and competition, but it is the combat handgun that receives most of his attention. In the last several years, Wiley has worked with distributors to manufacture classic combat handguns to his specifications—and while you might not agree with his platform, you can’t argue they are not well thought out and appointed. His latest collaboration involves the Ruger GP100, one of the best-built and most reliable revolvers on the planet. And like his other creations, this one has a number of unique and
interesting features. 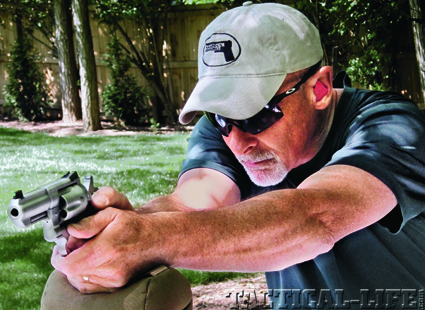 Testing the Wiley Clapp GP100 proved it to be a very accurate and totally reliable handgun in both .357 Mag and .38 Special.

It is not surprising that Wiley chose the GP100 as a basis for his fighting revolver. Designed 25 years ago to replace the Security/Service/Speed Six revolver series, the GP100 was designed to shoot thousands of rounds of full-power .357 Mag ammunition without the worry of cracked forcing cones, blown topstraps, stretched frames or any other mechanical failures due to prolonged use. All of the internal components in a GP100 come out the bottom, meaning there is no sideplate in the frame—thereby increasing the strength (long life) of the GP100. In addition, the GP100 has long been known for its excellent trigger action right from the factory. As everyone reading this knows…the better the trigger, the better you will shoot the gun. 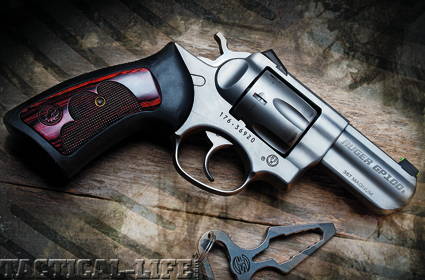 Specifically designed from its namesake’s voluminous knowledge of combat handguns, the Wiley Clapp GP100 is an excellent example of what is needed on a revolver that may someday be used to save your life.

To create his version of the perfect combat revolver, Wiley teamed with Robert Coyle of TALO, Inc. a distributor well known for introducing one of a kind custom handguns. The Clapp-inspired GP100 is an attractive revolver with a heavy matte stainless steel finish. The combination rubber/wood insert grips have a distinctive pattern that Wiley first introduced on his custom 1911 pistol, which was also released by TALO. The rubber front- and backstraps help reduce felt recoil, while the distinctive checkered pattern on the wood side panels coincide with how the fingers engage the grip. The result is a grip configuration that is both functional and elegant in appearance.

Another unique feature is the use of Novak Lo-Mount sights. Wiley makes no secret of his friendship with custom gunsmith Wayne Novak or that he feels the Novak sight system is among the best combat sights available. If you were to ask me about placing a Novak sight on a revolver, I would say it would be awkward—but actually seeing them I admit they are quite pleasing to the eye and look very sleek on the GP100. The rear sight is flat black (no dots) and adjustable for windage by loosening the setscrew. The front sight incorporates a large, very visible lime-green fiber optic rod while retaining a square front sight post configuration. The green rod is visible under a wide range of light environments, catching any available light that is available and contrasts nicely with the flat black rear. I know from past conversations that Wiley is a fan of brass bead front sights, so the use of a fiber optic sight is very “new age” indeed.

The frame and cylinder is “melted” so all sharp edges are removed, something that is critical for a gun that might be carried concealed. In reality, a “carry bevel” package on any gun intended for combat is a good idea as such a handgun will likely be manipulated under duress and having nothing but smooth surfaces “under skin” will aid such crisis operation. The cylinder release Ruger places on all of their double-action revolvers is the most intuitive in the industry. Being able to push in versus forward or pulling back is much easier to accomplish when digital dexterity is at a minimum—which it will likely be in conflict. The 3-inch barrel Wiley incorporated in his design is just about perfect as it is long enough for modern ammunition to build proper velocity, offer complete extraction of cases and still be fast from the holster. In the mid-1980’s the FBI issued a 3-inch revolver after exhaustive testing and evaluation and had great success with the gun right up until semi-autopistols became the norm for American law enforcement agencies. Just because times have changed does not mean the past is wrong. 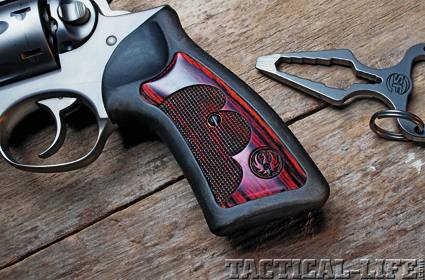 The special Wiley Clapp grips offer checkering only where the shooter’s fingers will actually need them.

The smooth trigger with its slight radius proved to be very comfortable and easy to depress straight to the rear. Revolvers have long lengths of trigger travel as compared to the semi-auto, especially striker-fired or single-actions, so having a trigger profile that permits proper finger placement is a real advantage, both physiologically and mechanically. Unlike with pistols, the trigger finger actually extends slightly downward when gripping a revolver high on the backstrap. If the trigger is not properly shaped and contoured, double-action trigger manipulation is difficult at best, impossible at worst and considering 0.25 inches of muzzle movement translates to a 4.5-inch miss at 20 feet, being able to smoothly depress the trigger is essential. The trigger on the Wiley Clapp GP100 is properly designed and was attached to a DA trigger that broke my scale right at 9 pounds. The SA trigger was measured at 4 pounds with a very nice release.

As good as the Clapp GP100 seemed to be from the box, the only way to really know how good a gun can be is to “bust some caps” and see how it performs. Since this model is technically a “snubby” revolver, I bench rested it at 15 yards. I shot five, five-round groups and averaged same while also charting velocity over the screens of a Shooting Chrony chronograph placed 10 feet from the muzzle.

I could lie and say the test was a snap but in truth it became brutal towards the end. The 125 rounds of full-power .357 Mag ammunition will get one’s attention and make the shooting hand throb a bit. That said, the rubber grips Ruger placed on the GP100 really do help tame the recoil…I would have hated performing the test with a set of wood stocks. The final 25 rounds were the excellent Federal 110-grain +P+ “Treasury load,” which makes any snub revolver more effective. This load was made especially for Treasury Dept. agents using the Smith & Wesson 2.5-inch Model 19 and it proved to be an outstanding performer. As beefy as this revolver is I would certainly opt to carry full-power magnum ammunition and certainly practice with same… some…but not always, due to both cost and comfort. 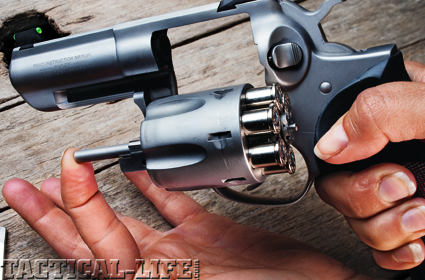 Carrying six rounds of .357 Mag or .38 Special, the Wiley Clapp Ruger is a comforting defensive tool to have when you need it the most.

I continued my testing by adding a Bianchi belt holster I had on hand for a 4-inch GP100 and shooting some of my typical practice drills. Unlike some of my contemporaries, I do not make the transition from pistol to revolver easily so I have to spend a bit of time getting used to the different grip angle and feel, longer trigger and taller weapon in my hand. Truth be told, it took some dry fire and 200 rounds of 158-grain semi-wadcutter .38s to get the feel of the GP100, but once I did it felt like an old friend. I carried a revolver on duty for 15 years before the pistol became standard so all I had to do was re-acquaint myself. The fiber optic Novak sights are a real asset when trying to shoot fast, which will be the case when fighting for your life. The cylinder broke open smoothly when attempting a speed load and the large cut placed in the left side of the factory grip made speedloader insertion much easier while also allowing them to fall free cleanly when no longer needed.

When shooting the El Presidente Drill it is hard not to notice how much longer it takes to reload over a pistol; however, it’s also hard not to notice how fast you can shoot due to the heavy all-steel frame helping keep the muzzle on target. Sure, the trigger is longer, but due to the noteworthy GP100 smoothness it can be depressed and released quickly making the Wiley Clapp GP100 a very fast shooter.

When it comes to putting together a fighting revolver, the Wiley Clapp GP100 .357 Mag has it all; hand-filling/recoil-controlling grip, fast acquisition sights, smooth trigger action, rounded edges and a powerful chambering—what more could you want? You might say “smaller” but then you would not want to practice with it, especially with full-power magnum ammo and we all realize the importance of practice when your life might be on the line. With a proper holster and belt the Clapp .357 Mag can be easily carried and concealed and let’s be honest, if you are fighting for your life (or the life of a loved one) don’t you really want a full-powered, handful of gun?