Concealed carry is primarily the purview of compact handguns. There are a few folks who refuse to downsize. Conceal carry beginners usually start the adventure dragging around the biggest piece of iron or polymer they can find. Eventually, the chore of carrying and hiding this behemoth causes them to reconsider. 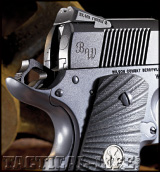 At that point, all too many join the ranks of those armed with only their carry license. The remainder may toss their handgun in the washer with the whites, dry it on extra hot, and end up with a compact. This has been a boon for the gun manufacturers, enthusiastically joining the cause, offering compact versions of their full-grown lines.

Custom smiths have been doing that for years. Long before Smith & Wesson and Colt’s Manufacturing offered scaled down versions, there were the Asps and Detonics. Today custom shops still provide that little something extra for discerning customers.

Though no longer a rarity, custom gun shops are still not found on every street corner. In the firearms world, those in the know can be counted on to recognize manufacturers and custom alike. The average consumer however, would recognize manufacturers mostly with an occasional custom shop name. There is one name though that continues to garner recognition from both, Wilson Combat, crafters of custom firearms for 32 years.

In 1977, I bought my first Colt 1911 .45 ACP, a year before discovering the up and coming IPSC (International Practical Shooting Association) competition. Bill Wilson began his journey in the world of custom pistols by hammering out work for those participating in IPSC. The work was mostly modified Colt 1911s then, but as the crowd moved to more exotic guns, so did Bill’s offerings, culminating in some of the finest pistols to be found.