Wilson Combat’s CQB pistols are among the most popular pistols for operators on the market today, being used for both concealed carry and duty use. I personally recall working the retail counter at a gun store when they first came out. It was about impossible to keep them in stock since it was a pistol that many had been asking to see built for years. Long known for its higher end custom pistols, the CQB was a custom pistol at a price more attainable for the average person. It was pretty bare bones, had all the features you really need in a working pistol, yet still built with the attention to detail seen in custom pistols. Although not an entry-level pistol by any means, it was really no-nonsense and void of some of the gadgets many other custom pistols sported. It was a strong seller then and maintains that strength to this day. 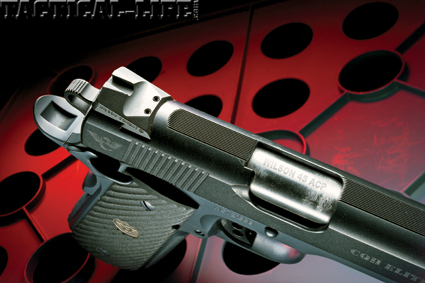 Serrations run the length of the top of the slide to prevent glare in direct sunlight, while a flared ejection port ensures reliable ejection.

Gun Details
The Elite really offers the best of the features typically seen in a combat pistol. Like all Wilson pistols, it is built one at a time to the specifications of the buyer. The basic package of this pistol has it all though—starting with a forged-steel frame and slide, it is constructed with Wilson Combat’s finest internal components. An extended magazine well is added, hand-fitted and contoured to the frame for fast and accurate magazine changes under stress. It is fitted with their new and very popular Pyramid “U” notch rear sight and a green fiber optic front sight. Having a good deal of time on these sights they are some of the fastest to acquire on the market.

The frontstrap is cut high with 30 lines-per-inch (lpi) checkering as well as the 30-lpi mainspring housing. This housing has a lanyard loop, a feature becoming common in duty pistols. The match grade barrel is hand-fitted using a standard guide rod. Along with checkering, the top and rear of the slide have serrations assisting with glare reduction. There are cocking serrations both on the front and the rear of the slide. It is completely dehorned for concealed carry and covered in Armor-Tuff on the colors of your choosing.

This pistol came in a very nice black lower with a gray slide and G10 grips that provide a very nice and professional look. All the parts were in a nicely contrasting black color. The package contains two of their proven magazines, in the case of this pistol the Elite eight-round magazines, all included in a really nice case.
Shooting Impressions

Instead of the typical test and evaluation, this pistol was taken to Gunsite for some real work. Gunsite Academy provided a 250 Pistol class in conjunction with the 100th anniversary of the 1911 pistol.

Although it included a number of special lectures, the training was the standard 250 curriculum. This is a solid class with proven doctrine, and expends about a thousand rounds over the course of five days. The majority of that is expended in the first three days on the square range. The last two days are split amongst some range time and time on the simulators. This school is not only a fantastic means to learn and or test your skills it is a solid test of the equipment you use. Shooting a few rounds on the range does not always bring out the weaknesses in your equipment. There is nothing like a solid pistol school to work out the kinks in any weapon system, or the equipment you field with it. Having attended many of these schools, it is not uncommon for “tested” equipment to end up on the bench or in the truck after the first day. Although a couple of pistols were used in this class at least half of the class was accomplished with this pistol. Expending about 1,200 rounds overall, close to 700 of those were fired through the Wilson Combat Elite.

With the exception of a box or so of frangible ammunition used in the shoot house, the entire class was completed using Hornady’s new Steel Match ammunition. Utilizing a 230-grain HAP (Hornady Action Pistol) bullet it is loaded into a steel case that is coated in polymer. It is designed for those that shoot more, such as competitive shooters and provides a cost savings of about 40 percent.

Over the course of the five days the Wilson Combat CQB Elite was used for the first two, and interspersed through the last two days in the simulators. My particular group was run by the most senior instructors at Gunsite, so it was all about the basics and trigger time. You simply do not get proficient talking about how to use your pistol, you need the press the trigger, and we did that a ton. 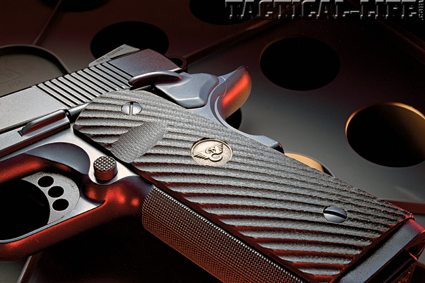 Solid G-10 Starburst grips grant exceptional control of the pistol without tearing up shooters’ hands during long days on the range.

The Elite ran without a hitch producing the accuracy one comes to expect from a Wilson Combat pistol. It was fast, accurate and really comfortable to shoot. The sights are very well suited to a “flash sight picture” and fit in perfectly with the Gunsite Doctrine. It was solid in the hand, and when we made it out to prone at 25 yards it was incredibly accurate. It had no really issues with the steel-cased ammunition, as there never was a malfunction to speak of. Press checks were a bit problematic as the ammunition seemed to stick a bit in the chamber, but that turned out to be an ammunition issue. The same thing occurred with the other two 1911 pistols used in the class. Other than that, it was a dream to shoot and worked really well in the outside simulators. The fiber optic sight is easy to see in the sunlight for sure, and that rear sight allows for solid accuracy yet fast acquisition.

When attending classes like these it is really critical to use the correct gear. It really is not helpful to use a “range holster.” Gunsite is all about fighting with your gun, and that means you carry it during the school the same way you would on the street. For most of us, that is some sort of concealment holster.

Wilson Combat was nice enough to provide a holster and magazine pouch for this class. The holster was a practical carry in leather. This is a low cut holster that is suited for concealed carry, but would be equally at home at either competition discipline. It was used throughout the class without regard to which pistol was in the holster. It proved fast to the draw, yet held the pistol securely under the most rigorous of conditions.

The magazine carrier was a simple single magazine unit. Given my general practice of carrying one spare magazine this was perfect. It meant all of the practice would be completed with the carrier in the same place it was in the real world. It also proved to be very secure and fast for reloads. It was an excellent combination that proved reliable, secure and practical throughout the class—a combination I intend to use with much greater frequency.
Accuracy

Although plenty of time was spent under more fast-paced testing at Gunsite, upon my return it was time to take it to the home range for some accuracy testing with different ammunition. Given that the Hornady was used during the class, it was tested, as well as several loadings from Black Hills and Federal. All of the accuracy testing was completed from 25 yards using a bench as a means to steady my hold. The most accurate load was the Black Hills 185-grain +P loading. It uses a Barnes bullet making for a very useful concealed carry round. It was at the lower ranges of +P but was incredibly controllable. It produced a 1.37-inch group at 918 feet per second (fps). The HAP loading proved accurate as well measuring a bit under 2 inches at the same distance. Clearly this pistol is more accurate based on the test target that came with it, and it includes a 1-inch at 25-yard guarantee. But given a cold and windy day and just resting my arms on the bench this was excellent accuracy and far in excess of anything necessary for the real world. 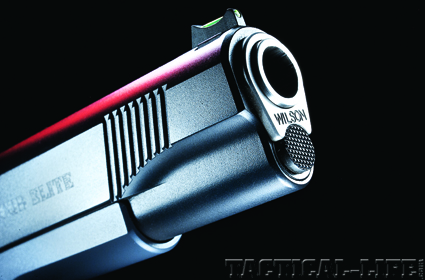 The five-inch match-grade stainless barrel with bushing is hand-fit, and on the top of the slide there is a fiber optic front sight

Another 500 rounds or so of several types of duty ammunition were run through his pistol. The bullet weights ranged from 185 to 230 grains and included both Hollow Points and Full Metal Jacket bullets. The loadings were both standard and higher-pressure loads. It ran both the brass cases and the steel cases with no issues. Even with the +P loadings it was controllable and accurate.

Not that you truly expect a Wilson Combat pistol to either not work, or not be accurate, but this pistol proved to be no exception. The features on this pistol are really the most popular amongst those that carry a 1911 pistol in the real world. Whether you are going to take this pistol out on the town, on the job, or at your local IDPA competition the CQB Elite is probably the best mix of features for this platform. If you are in the market for a custom pistol with truly practical features then take a really good look at the CQB Elite—it will probably meet your needs and then some. Find out more by calling 800-955-4856 or visiting wilsoncombat.com. l