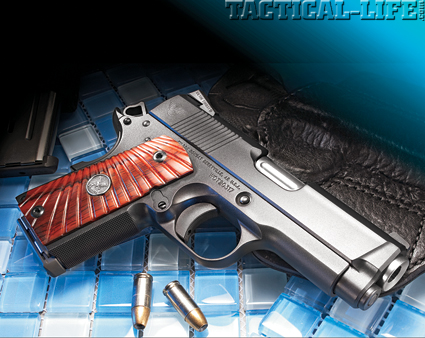 Like all Wilson Combat pistols, the Ms Sentinel is custom-built one at a time. For maximum concealability, it is built on Wilson Combat’s shortest aluminum frame making it the smallest and lightest 1911 they offer.

The quest for a compact 1911 pistol that is reliable, accurate, and controllable has existed almost since the inception of the design. For many years that has been found in .45 ACP with varying degrees of success. Early on, the shortest barrel that would work with any reliability was the 4-inch Commander. The Officer’s Model was later introduced, with its 3.5-inch barrel making for a pistol that was easier to conceal. They are small enough and light enough to allow for long term comfortable carry, but large enough to shoot accurately, even with larger hands.

While many people had no real issues with this size pistol, there were equal numbers that just did not find them to be consistently reliable—especially with the hollow point ammunition of the day. Even shorter 3-inch pistols came later on with even more mixed results. A few of these worked really well while others were very picky about what you fed them. A good match of ammunition and gun yielded good results, but you had to do some homework for sure. 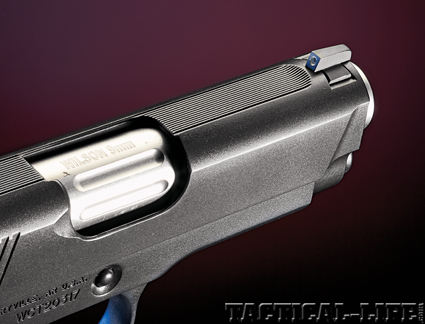 The ejection port is lowered and flared to increase reliability. The barrel of the pistol is fluted for lighter weight as well as unique aesthetics.

Along with some of the reliability issues, the simple limitation of muzzle velocity came into play. The .45 ACP cartridge was not really designed to be used in short barrels. It is not as if it won’t work, but the design was really meant for the velocity you get out of a 5-inch barrel. Initially the solution was lighter bullets at higher velocities. An example is the 185-grain bullet, that offered higher speeds and provided ballistics that approached those of the 230-grain bullets out of a longer barrel. This solution also met with varying degrees of success over the years. One of the latest efforts to deal with this was the .45 GAP round—a solution that a few in the 1911 market adapted to their smaller pistols. Those few I tested actually worked pretty well, but it is just another “solution, in need of a problem” for most of us in the 1911 world. What was really needed was a bullet that was proven in small pistols that would work in the 1911 design.

Enter The 9mm
This is not a new idea, as some of the most sought after 1911 pistols out there are the very early 9mm Commander-sized pistols. Those lucky enough to have these seldom want to part with them. Even so, they were anything but widely popular, especially early on. Much of the bigger-is-better crowd simply could not lower themselves to have a 1911 pistol chambered in anything but .45 ACP. They also tended to be really finicky with anything but 9mm FMJ ammunition. That was particularly problematic since it was bullet design that was the major limitation with that cartridge. The 9mm did have some issues with ballistics, but many rounds did early on. Time and technology has dealt with most of those issues. 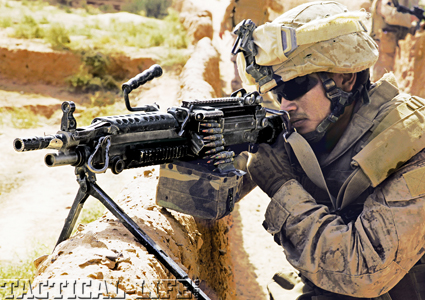 Like all Wilson Combat pistols, the Ms Sentinel is custom-built one at a time.…