0
SHARES
330
VIEWS
Share on FacebookShare on Twitter
With pistols getting smaller it becomes important to maintain effective power. The .38 Super provides excellent ballistics and works well in small pistols like the Super Sentinel from Wilson Combat

The .38 Super is anything but new, but it’s experiencing a bit of a resurgence. First introduced in 1929, it is described by most as an improvement to the .38 ACP, a cartridge that many are unaware had ever existed. The .38 ACP was used in early automatic pistols, producing velocities just over 1,000 feet per second (fps) with 130-grain bullets. But Colt was looking for a bullet with better penetration. It bumped up the .38 ACP’s velocity and created the .38 Super.

Initial loadings sent the same 130-grain bullets downrange at nearly 1,300 fps, rivaling that of what would later become the .357 Mag. It was the Magnum’s arrival, in fact, that ultimately signaled the .38 Super’s unpopularity. The two rounds had similar ballistics, but the law enforcement world was simply unwilling to give up its revolvers. 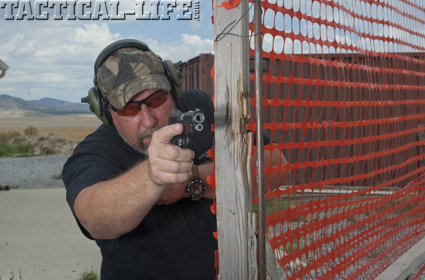 The .38 Super also suffered from some accuracy issues when the move was made from the Colt M1900 to the 1911 platform: in early designs, the semi-rimmed cartridge would not headspace properly. But with the introduction of a barrel that would headspace on the case mouth, this all changed. In a single-stack magazine, the .38 Super proved to be accurate and powerful, gaining large approval among competitors in the action-pistol game. It also grew extremely popular in Latin America—especially Mexico—where civilian ownership of “military” cartridges was not permitted, making pistol ownership problematic. However, the .38 Super was a powerful cartridge in the 1911 platform, one that was compliant with their firearms laws. 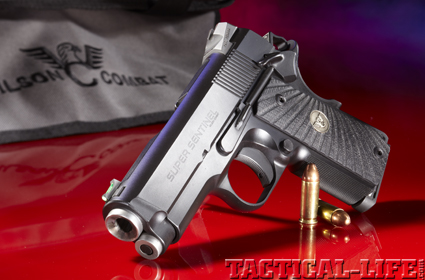 The .38 Super remains a favorite among many IPSC competitors, especially in the Open division. Modern components yield some impressive ballistics: most 125-grain loadings are making close to 1,400 fps, and some custom ammunition companies are getting over 1,500 fps with lighter bullets. For those looking to make major, it is hard to beat. The recoil impulse is rapid, enabling some amazingly swift repeat shots. And full-sized pistols equipped with compensators are quick, accurate and apt for the action-pistol sports.

As the .38 Super remains a preferred round in Latin America, it has also taken hold in Australia. In America, the cartridge is increasingly used as a self-defense chambering, particularly with more shooters now on the 1911 platform. Several custom pistolmakers are chambering their guns in this caliber in just about every size. Colt offers it in several of its pistols, as does Springfield Armory, and Kimber offers it in their mid-sized pistols. Because the .38 Super has a somewhat different recoil impulse, it is controllable and accurate in even some of the smaller frame sizes. And, in my opinion, one of the best such handguns is the Wilson Combat Super Sentinel.

Bill Wilson has been building 1911s since the ’70s. His line of Wilson Combat pistols is still one of the most popular custom-1911 series on the market. As a longtime competitor, he is well aware of the .38 Super’s advantages and has been offering mid- and full-sized pistols in this chambering for years. For the 1911 pistol with a 4-inch barrel and steel or aluminum frames, the .38 Super is an excellent caliber, presenting a light snap of felt recoil and 1,300 fps with 115- or 124-grain bullets (perfect for self-defense).

Bill has never really felt that shorter-barreled guns in .45 ACP have been completely reliable. Thus, he does not offer a 3-inch-barreled .45 handgun. However, understanding the need for a line of truly compact pistols, he created the Sentinels, sub-compact pistols designed for deeper concealment, light weight, and complete reliability. The first Sentinel was chambered in 9mm, a proven cartridge in short barrels. His latest offering, the Super Sentinel, is chambered in .38 Super, an excellent platform for concealed carry. 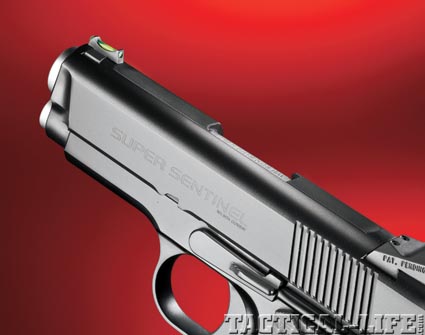 Wilson Combat uses a short trigger on the Super Sentinel. The slide stop and safety are made from highly durable steel.

The Sentinel has an aluminum frame mated to a 3.5-inch carbon steel slide. This frame is a half-inch shorter than a compact frame and includes 30-line-per-inch (lpi) checkering on a high-cut frontstrap. It contains a crisp and predictable trigger that breaks at 3.5 to 3.75 pounds, with a high-ride beavertail and a tactical thumb safety. The magazine well is contoured for fast magazine changes. The gun is topped off with a set of G10 Slimline grips.

A 3.6-inch match-grade barrel has been carefully hand-fitted to the slide. It is coned, but a fluted barrel is an optional upgrade. The top of the slide is grooved to reflect glare, and a Wilson Combat Battlesight fiber-optic front sight is installed. A full-length guide rod and reverse plug are used to increase accuracy and reliability. Elite Tactical eight-round magazines designed for the Sentinel are provided. The Super Sentinel is coated in Armor-Tuff and comes in a Wilson Combat nylon case.
For testing purposes I used an IWB holster for a 1911. It was a bit loose—the holster’s had years of use—but plenty tight for concealed carry and range use. Standard 1911 magazine holders can be used. Carrying the Super Sentinel around for a few days was comfortable while being easy to access even with the shorter grip. I will note that, in my experience, drawing some of these smaller pistols from the holster does take a little getting used to.

There are quite a few choices in .38 Super these days. Wilson Combat makes some excellent ammunition, as does CorBon and DoubleTap, and solid practice ammunition is available from several manufacturers. Most of the standard ammunition mimics the original load with a 130-grain bullet listed at around 1,200 fps. Self-defense choices are primarily 125-grain HP bullets in the 1,250 to 1,325 fps range. Some of the 115-grain ammunition is making as much as 1,425 fps. Most of the above velocities are out of 5-inch barrels, so testing them in a 3.6-inch barrel would be interesting. 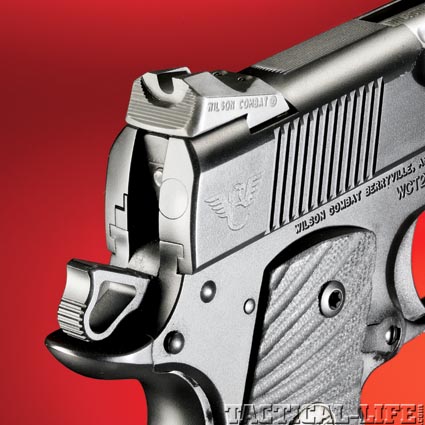 Shooting this pistol was a bit different. It had the same feel as my 10mm when fired in a full-sized 1911 and a similar recoil impulse (swift with a loud report, though not as stout). The hottest of the loads, the CorBon was a bit more harsh, but not overly so. Having shot all of the other Sentinels in 9mm, the Super Sentinel was no less controllable. Fast second shots were possible, and with a solid hold it was very accurate on the move. While I often have issues wrapping my rather large hands around smaller frames, the Super Sentinel’s high cut coupled with a base pad meant my little finger could get a hold of the grip. 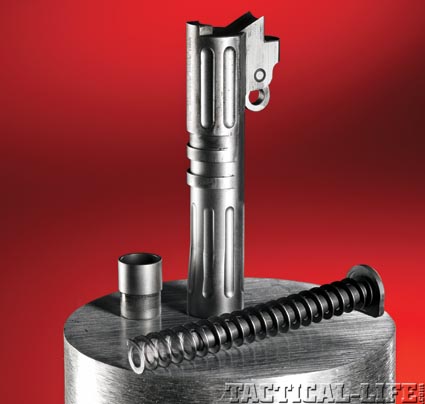 As one might expect with a quality pistol, it worked perfectly. Four magazines were provided, and all loaded easily and worked well. The best group, 0.87 inches at 15 yards, was accomplished with the Winchester 125-grain Silvertips. The load was a tack driver at typical engagement distances. Although no groups were fired at longer ranges, some time was spent on the 6-inch steel at 25 yards, to great effect. Once I acquired the proper hold, I got regular hits from off-hand. Loading up a couple magazines and trying the same target off-hand at 50 yards, I had a 70/30 hit ratio—pretty solid considering the 3.6-inch barrel, small frame and higher-pressure ammo. 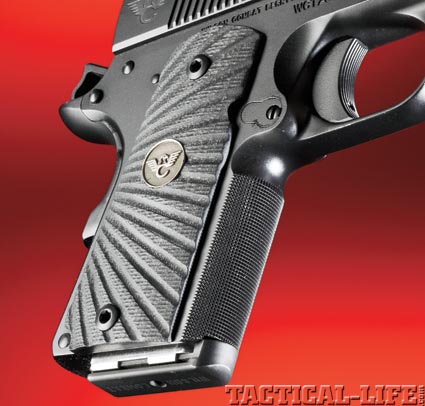 Velocities did seem to drop quite a bit with the shorter barrel. It seemed to be pretty consistent at around a 100 fps drop for each load. The CorBon was listed at 1,425 fps and measured 1,304 fps—no slouch. Most everything else clocked in around 1,100 fps, which still get you close to 480 foot-pounds of energy at the muzzle—plenty for concealed carry work, especially out of a pistol this size.

Given my age and the time I spend on the range, my wrists can be a bit sensitive to magnum loads, especially coupled with small pistols. A long day with my 10mm means sore wrists and elbows. Years of shooting along with some other endeavors have taken their toll. Even a .45 ACP these days can be uncomfortable after a long day. Not so with the Super Sentinel, which was a bit of a surprise to be honest. At the end of testing day, I expected to have a few aches—I didn’t.

This is my second time around with a .38 Super (the first was with a friend of mine who’s a real fan of the cartridge). I can see why many enjoy this chambering. It is deceivingly easy to shoot and has unique recoil. And while the velocities suggest this gun is a hand cannon, it’s actually a pretty soft shooter—in the Super Sentinel’s short package, the .38 Super may have found another sweet spot. The Super Sentinel is lightweight, accurate and very easy to conceal. It proved 100-percent reliable and a ton of fun to shoot. Like all specialty chamberings, it is going to require some forethought when it comes to ammunition, but it is available in a wide range of bullet weights and velocities.

If you are looking for a really solid shooter in a small package and a proven chambering, then make sure you give this Wilson Combat Super Sentinel a solid look. For more information, please call 800-955-4856 or visit wilsoncombat.com.