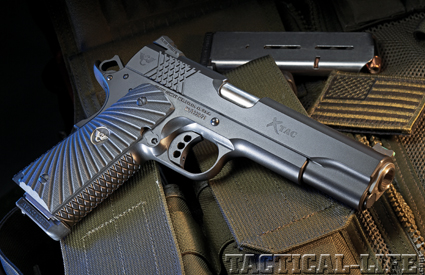 Designed as an “entry-level” pistol for Wilson, the X-TAC maintains the same level of craftsmanship as any other of their impressive line. The frontstrap features Wilson Combat’s new “X” pattern, a wide flat-tipped pattern that provides an excellent gripping surface without the abrasive characteristics of checkering.
Comment(s)

I make no effort to hide my fondness for John Browning’s Model 1911. The number of 1911s in my safe, both personally owned and those on loan, is well into double digits. In 1971, I purchased my first pistol—a Colt Combat Commander with the satin nickel finish. Since that time, the inventory has continued to grow. Over the years, my affection for the 1911 has grown, as have my skill and proficiency with Browning’s masterpiece. For the past nine years, a well broken-in Springfield Professional has been my off-duty “go to” gun when I carry a full-size pistol. It has logged a lot of miles and rounds, to include being used in a high round count FBI Firearms Instructor’s course. Even after an estimated 25,000 rounds, it is as reliable as any semi-auto pistol I have ever owned.

I recently went back and looked at the list of the articles I have written over the years. To my surprise, I found that 23 of the articles were reviews on some flavor or another of the 1911. All of this is to say that when John May of Wilson Combat called and said Wilson had a new 1911 model coming out that I would really like, my answer was “ho-hum.” After all, I asked, how much more can you do that has not already been done? John refused to give me any real details but I sensed his excitement. After waiting for almost four months, May e-mailed me the UPS tracking number that indicated the pistol was on the way to my dealer.

Even before the new pistol arrived, I called May to get some details. He said that the X-TAC was designed as an “entry-level” pistol for Wilson and that the name came from the “X” pattern with the TAC being short for “Tactical.” For years, Wilson Combat has been known for their hard-use 1911s, such as the CQB and Tactical Elite. They currently show 21 different 1911s on their website. Not content to just build 1911s, in their spare time, they also build tactical 870 shotguns and a variety of AR-15/M4 rifles. With all of this going on, they somehow found time to design another 1911. I must admit, they did come up with something different.

Gun Details
When I picked up the X-TAC, I found that it was shipped in the standard Wilson Combat pistol rug that is monogrammed and features two external pockets. Opening the familiar gray case, I discovered a cleanly executed government model that is faithful to Browning but uniquely Wilson. At its heart, the X-TAC retains all of the quality and strength on which the Wilson reputation has been built. It is a full-size, 5-inch Government model with a carbon steel frame and slide and quality internal parts that are produced to Wilson’s demanding specifications.

I make no effort to hide my fondness for John Browning’s Model 1911. The…