While reading a gun magazine in 1976, I read a small announcement of a Combat Shooting Conference to be presented by Col. Jeff Cooper at the Midwest Practical Pistol League (MPPL) range in Columbia, Missouri. Living approximately a two-hour drive from Columbia, and having followed the Col.’s writing about so-called Combat Shooting, I placed a phone call to the contact listed, Dick Thomas. Dick organized the conference and indicated there were still open positions, so I signed up to attend. This turned out to be the IPSC Founding Conference. It was also my introduction to the MPPL, and I shot in their monthly Combat matches for several years. It was at one of these matches that I first met a skinny young man that drove in from Arkansas each month for the Combat matches in a white Camaro. This young man was Bill Wilson. 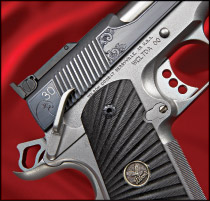 Wilson’s History
Bill soon made his presence known, placing well in the matches. This was quite an accomplishment for an unknown new shooter, considering that among the local regular shooters competing were IPSC founder Dick Thomas and Raul Walters. Walters was a legend in early IPSC days, being the high placing US shooter in several IPSC World Championship shoots. In those days, with Kimber, Para USA and Springfield Armory 1911s years in the future, there were only a few pistol-smiths tuning and modifying the Colt 1911 pistol for IPSC competition. These included the legendary pioneer in the sport A.D. Swenson, Pachmayr Gun Works and Jim Hogue.