BARRETT’S ROLE IN FREEDOM FIGHTING
Required to remain silent about his role due to national security concerns back then, Ronnie Barrett nonetheless played a significant role in helping to support the Afghani freedom fighters during the Cold War with his .50-caliber rifle. However, with the release of the movie Charlie Wilson’s War, Ronnie’s role in providing his amazing Model 82A1 to their resistance movement can now be common knowledge.

FRONTLINE FACTS
M107 LRSR: The U.S. Army’s designation of the Model 82 series rifles as adopted for use as a long-range sniper rifle. 1,500 and 2,000 meters: The distances at which Picatinny Arsenal rates the M107 capable of engaging personnel and materiel targets, respectively.

BROTHERLY BARRETTS
.416 Barrett: Made by necking down the .50 BMG case to a smaller .416-diameter bullet, the .416 Barrett propels a roughly 400-grain projectile at around 3,300 feet per second.

COASTS ARE COVERED!
The U.S. Coast Guard employs a variant of the M107 that differs from those ordered for the U.S. Army. They feature fully chromed bores and a special anti-corrosion finish to counter the harsh environments in which they will be used. 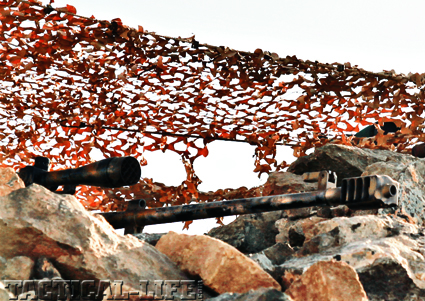 COUNTER SNIPING
In a counter-sniper role, the U.S. military considers the Model 82A1/M107 to be particularly well suited due to the range and terminal effectiveness of the .50 BMG cartridge when pitted against snipers with smaller-calibered weapons.

BARRETT MILESTONES
1982: The semi-automatic Model 82 was introduced in 1982 and was the first of his .50-caliber rifles that would spawn a revolution in fifties in this country. The improved Model 82A1 would be released a few years later.

1990: This year saw the development of a prototype rifle dubbed the M90 or Model 90 that Ronnie built in three days. Although it was never manufactured for sale, it paved the way for future models.

1995: An improved version of the Model 90 was developed and released this year as the Model 95. As opposed to the semi-auto Model 82A1, the Model 95 was a bullpup-configured bolt-action .50-caliber rifle.

1999: This year saw the introduction of the Model 99, a bullpup single-shot .50-caliber rifle that also had the distinction of being the first Barrett rifle developed entirely with a computer program. 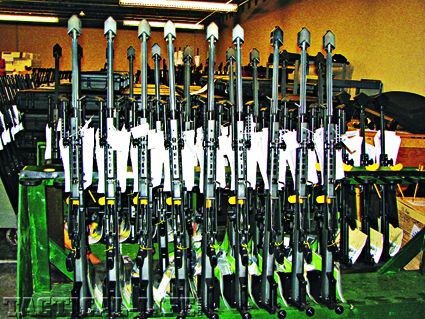 FROM SPORT TO BATTLE
When Ronnie Barrett first drew out the plans for his Model 82A1 shoulder-fired .50 BMG rifle on his kitchen table more than 25 years ago, he intended it strictly for his own sporting pleasure. However, over the years, his radically unique firearm has become the standard for extreme long-range tactical shooting in law enforcement and military circles.

PERCENTAGE PLAYS
The difference between horizontal and vertical movement in barrel movement response of an Model 82A1 during firing, measured near the receiver and near the muzzle (respectively) is 18% and 14%.

BARRETT BY THE NUMBERS
3: The number of Barrett’s (Ronnie, his son Chris and his daughter Angela) involved in this family-run business.

3: The number of moving parts (extractor, ejector and firing pin assembly) in the Model 99’s simple and easy-to-maintain bolt.

80,000/110: The size in square feet of Barrett’s state-of-the-art facilities in Murfreesboro, TN, and the number of employees working there.

10: Capacity of the sturdy steel detachable box magazine for the Model 82A1/M107 series of semi-automatic rifles.

PERCENTAGE PLAYS
The difference between horizontal and vertical movement in barrel movement response of an Model 82A1 during firing, measured near the receiver and near the muzzle (respectively) is 18% and 14%.