0
SHARES
2.2k
VIEWS
Share on FacebookShare on Twitter
When trouble comes through the door, the savvy homeowner is fully armed with the proper hardware, information, and self-defense training. Ichiro Nagata Photo

Prudent homeowners understand that the best form of defense for themselves and their families against assault is a firearm. I was privy to a conversation at a local gun shop where a man was pondering the purchase of a long gun for home protection. He had just about convinced himself to buy an AR platform carbine, but was having second thoughts about the .223 Remington cartridge and whether or not it was “safe” to use inside a home. Specifically, he was worried about over-penetration. He was considering an AR carbine chambered in 9mm instead of .223.

To the casual reader this might seem like a very reasonable compromise. Surely the 9x19mm pistol cartridge would represent a reduced over-penetration hazard when compared to the .223 Remington centerfire rifle round. My goal in this review would be to compare the two from a ballistic standpoint, as well as provide a realistic downrange damage assessment.

The Contenders
For this review it seemed logical to secure both a 9x19mm carbine and nearly identical version in .223 Remington. CMMG, Inc. of Fayette, Missouri, happened to have a near matching set in both calibers.

Presented for your consideration are M4 style carbines with 16-inch barrels. One model chambers the 5.56mm/.223 Remington round and the other the 9x19mm round. Both have flat-top receivers, 4-way rail aluminum forearms, and retractable stocks.

The free-floating 5.56mm barrel has 1 in 7 right hand twist rifling. The 9mm version used 1 in 10 rifling. Both barrels were capped with a NATO-style birdcage flash suppressor. Also, each carbine used a Picatinny rail gas block.
As for operation, the 5.56mm model was CMMG’s new gas-piston carbine and the 9mm version used a straight blowback, recoil-operated mechanism. All external controls for both carbines were standard AR configuration, including the bolt catch, magazine release button, manual safety lever and trigger.

Lower receivers varied in that the 5.56mm model used a standard AR configuration and was fed by all AR style magazines. The 9mm lower was a dedicated receiver, not a plugged or modified AR-type. Metalform 32-round stick magazines fed the 9mm carbine.

For sights, I installed the new EOTech XPS3 HWS on each one. The XPS3 uses only one CR123 Lithium battery and is more compact than older models. The dual “circle and dot” reticle was used. These sights were zeroed a practical range of 50 yards.

The ammunition for this review would be that specifically designed from personal protection. Training and target ammunition are great for the range, but when it really counts we need to spend the cash on high quality ammo designed for the task at hand.

Both CMMG carbines that were tested use four-way aluminum rail systems. 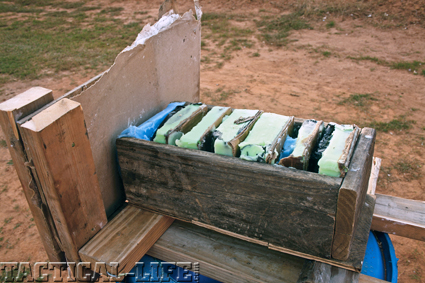 An interior wall façade constructed of two layers of sheet rock and plywood.

.223 Remington
Hornady has been offering their TAP (Tactical Application Police) defensive line for some time now and it has seen success in real-world encounters. Featured herein would be their 60-grain TAP load chambered in .223 Remington. When fired from my CMMG rifle, this loaded averaged 2,855 FPS (feet per second) over a Shooting Chrony F1 chronograph.

Benching the rifle, once I had the EOTech optic properly zeroed, I put some test patterns downrange. The resulting groups were predictably tight. A tight 1.17-inch three-shot cluster at 50 yards proved the carbine and ammo combination could be counted on.

9x19mm
For the 9mm pistol ammunition side, the new Winchester PDX1 brand was tested. This ammunition line is specifically marketed for personal protection. The load in question was a 147-grain bonded JHP. If this bullet looks familiar it is because the copper-colored projectile is the heart of Winchester’s Ranger LE ammunition line.
Over my chronograph, this load averaged 1,140 FPS from the 16-inch barrel. Again, from 50 yards I fired several test groups on paper. The best group was right at 1.25 inches. 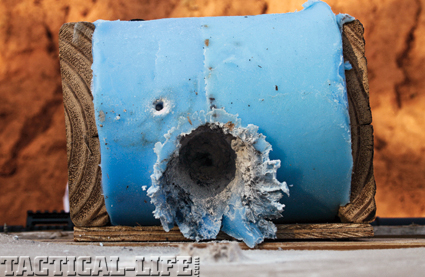 Real-World Test Conditions
This review is about much more than guns and ammo—it’s about performance. I needed to construct some realistic test barriers and bullet-capturing devices. Up first would be an interior wall façade. This barrier was built using two layers of half-inch sheet rock and a single layer of quarter-inch plywood. This would represent a standard interior wall construction, minus 2×4 studs. An additional portion of the “wall” would include two 2×4 boards combined with the original sheet rock and plywood construction.

Capturing the fired bullets would be accomplished through the construction of a bullet trap of sorts. This contraption was more of a rectangular trough made of wood with an open top. Into the bullet box I place thick squares of waxy ballistic media.

First up was the 9mm carbine. After placing the wallboard material in front of the bullet trap, I took aim. From a distance of 7 yards, I fired a single round of the Winchester ammunition. The bullet passed completely through and entered the waxy media.

Step two was to fire the .223 cartridge from Hornady. Same scenario, shot through the wallboard into the wax media at 7 yards. On the front of the wallboard was an unimpressive .22 caliber hole. However, on the other side, the results were a bit more spectacular. The projectile did its job very well and expanded violently. A hole nearly three 3 inches across and as deep was left in the wax media.

Next on the agenda was to fire both carbines into the 2×4 and wallboard material. This would represent nearly 6 inches of common building material found inside normal interior walls. Both the 9mm and .223 Remington rounds passed completely through.

Taking a moment to closely examine the bullet box, I pried apart the layers of wax media and found that the .223 TAP round had penetrated just shy of 8 inches. At that depth I discovered several bullet fragments. The projectile had come apart completely.

Moving on, we found that the 9mm projectile had traveled a full 15 inches into the wax media after passing through the wall façade. It had not deformed and looked almost good enough to be reloaded. 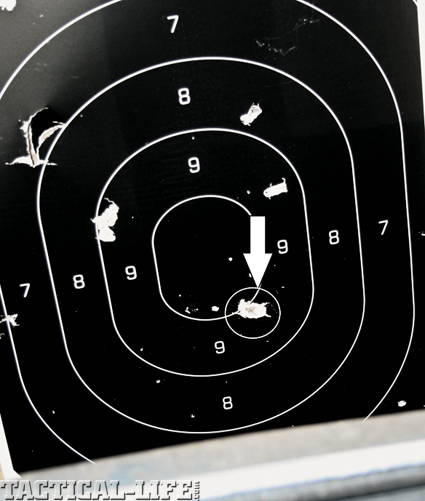 One round of 9mm fired through a car door. Note the mild fragmentation.

We Report, You Decide
As for our initial conversation, was the 9mm carbine less likely to “over-penetrate” than the .223? Based upon our experiments, I believe we can see how this is not necessarily the case at all. Both rounds easily passed through the basic wallboard material and then through the thicker wall and double 2×4 target. What was most impressive was the fact that the .223 round deposited 100 percent of its energy into 8 inches of wax media. Consider that the torso on most human attackers will be anywhere from 10 to 15 inches, depending on the angle and human variables. It would seem that the purpose-designed .223 Remington load would be less likely to pass through an attacker and continue on through an interior wall than the 9mm fired from the same platform.

From a practical, household standpoint, both platforms provide ample accuracy and few felons would want to be shot with either gun. The bottom line is that a pistol cartridge, even when fired from a carbine, is still going to perform like a pistol cartridge. The carbine platform has the advantage of being easier to control, aim, and hit your target with. Carbines or rifles are more imposing than handguns.

When it comes to defending your life with a firearm, base your choices on fact, not supposition. Secure some professional training and practice. Keep shooting straight and shooting safe. 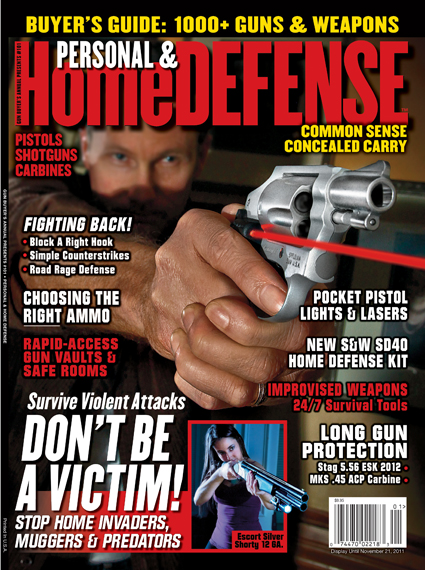