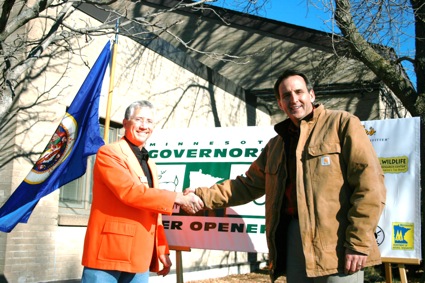 Governor Pawlenty, in partnership with the Minnesota Deer Hunter’s Association, has held a deer hunting season opening weekend event at various locations around the state during the past eight years that he has held his top post. During this final year of his service to the state, the event was held in the quaint town of Little Falls and on famous Camp Ripley. While the 53,000-acre Army post is known for harboring HUGE whitetails, the day before the opener school kids were a more common sight than deer. More than 200 elementary students from surrounding schools came to learn about hunting, tracking, archery and trapping. Their day-long events and contest ended with awards presented by the governor by a campfire.

At a speech to a large crowd of hunters, the Governor was quick to recognize hunting’s economic impact on Minnesota. He also issued a challenge to hunters everywhere.

“I hope you take seriously the responsibility we have been given as deer hunters,” said Governor Tim Pawlenty. “Please keep the tradition alive in your family and in your deer camp.” The governor also praised the state’s many outdoor recreation opportunities—and haled its leadership in the nation in outdoor recreation. “We live here, we hunt here, it is our legacy,” the Governor continued. After the speech, the Governor went to scout the area he would hunt the next day.

The following day the Governor (a potential presidential candidate in 2012) was up early and sat for more than six hours with his brother in a remote tower stand on private property. He hunted with a scoped, bolt-action rifle. A white-tailed spike and some does passed by early in the day, but the Governor held his shot for a larger buck that never came. The hunt was a bigger success, however, in another way.

Governor Pawlenty’s office held a special drawing and three active-duty military members were selected and permitted to bring their kids on a deer hunt. For some of the young hunters the experience was a first hunt, or a chance to again go hunting with dad. In most cases the dad had been deployed overseas and this was the first time father-son and father-daughter teams had to spend together outdoors.

“I would just really like to get a big buck,” exclaimed 11 year-old Ethan Haak, who was hunting with his dad, Jeremy. Jeremy is a full-time US Army soldier stationed in Minnesota. Governor Pawlenty recognized the importance of Camp Ripley to the local Little Falls community and to the state. He also led the large crowd in recognizing and thanking the  military personnel and veterans who were present for a special luncheon.

As someone who is familiar with military rifles, Jeremy selected a DPMS AR rifle with adjustable stock and chambered in .308 for his son to hunt with. The AR was equipped with a Nikon 2.5-10X42mm Monarch riflescope. On this day the team did not get a deer, but Ethan had downed his first deer a few weeks earlier in a special youth hunt that was held in Minnesota.

One other thing is strongly evident regarding deer hunting in Minnesota—hunting camps. The classic camp tradition is alive and well there. One rural camp I visited on the eve of opening day had a roaring campfire with more than 25 family members –from four generations—gathered around. Those hunters grilled steak suppers, exchanged greetings and hugs, and swapped hunting stories as the flames reached into the deep darkness. Many of those hunters also spent the night at the camp in tents and campers. And much like the Governor, those hunters were out early the next morning with high hopes. Unlike the Governor, some of them killed deer that day. 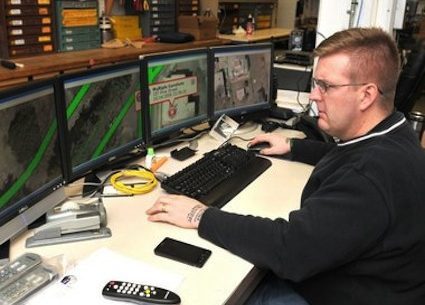