A Pair of Sixes to Draw To

by Bob Arganbright
in Exclusives
0

This is a story about two special Colt SAAs I salvaged for use in CAS and Fast Draw.

I found the first one while surfing the Internet. While checking for first generation Colt SAAs on www.gunsamerica.com, I found a fascinating customized .44-40 Frontier in the 74000 serial number range, one of 12000 Colt SAAs manufactured in 1882. The old Colt was modified to a Sheriff’s Model configuration by cutting the barrel back to 2-1/8 inches. The ejector assembly was discarded, and the ejector boss was left unmodified on the frame. The entire grip frame and grips were replaced with a polished brass grip frame from an original Colt 1851 Navy revolver with a one-piece walnut grip. The barrel was professionally crowned and a proper blade front sight was installed. The barrel and cylinder still have the last four digits of the serial number stamped on them, so all parts except the grip assembly and grips are original. While this is the type of SAA revolver that I find most interesting, the “kicker” was the special Berns-Martin open front Speed holster that was custom made just for this short barrel Colt Frontier.

The Berns-Martin Speed holster was designed in the 1930s and is an open front pouch holster that encloses the triggerguard and secures the revolver with a “C” shaped flat spring that clasps the cylinder. To draw the gun, one rocks the revolver forward to clear the triggerguard, and the frame and barrel pop out the front of the holster. The FBI was very partial to the Berns-Martin. Both Elmer Keith and master handgun exhibition shooter Ed McGivern illustrate and recommend the Berns-Martin Speed holster in their classic handgunning books, Sixguns and Fast And Fancy Revolver Shooting, respectively.
With this fascinating old Colt made for black powder cartridges, and with the cylinder locking notches being well worn, I did not feel it is safe to shoot with live ammunition. Going to my spare parts box, I found an EMF .44-40 Colt clone cylinder which only required a few minutes of fitting to function perfectly, yet is safe for use with modern smokeless powder CAS loads.

While unverifiable, this interesting Colt SAA belly gun and custom speed holster was reported to have come from Las Vegas, Nevada, where it was carried by a security guard some 50 plus years ago. This is quite possible, as more than a few shot smokeless powder loads in black powder model Colt SAAs up until WWII. Also, a security guard carrying a custom sixgun in a custom speed rig might very possibly want a flashy pistol grip showing at his hip, explaining the brass 1851 Navy grip assembly. I consider myself very fortunate in having the opportunity to provide this unique antique Colt SAA with a new home and to shoot it in CAS. 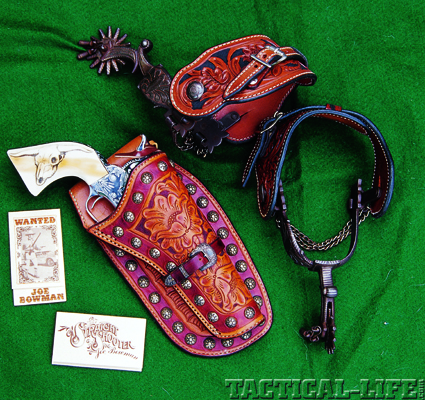 The shadow box Colt is right at home in this Roy Rogers style silver mounted Hollywood holster made by Joe Bowman. The Hollywood style spur straps on the vintage Garcia spurs are by Alfonso’s of Hollywood.

The second Colt SAA came to me through a friend. He purchased it with the highest bid at an auction. In the 239000 serial number range, it was manufactured in 1903 and was also one of 12000 produced that year. When purchased at auction, it was mounted in a shadow box for wall display. Sadly, after purchasing the Colt, my friend found that whoever mounted it had deactivated it, for display only. The 5.5-inch barrel had been threaded inside the muzzle for a muzzle plug. The breech face of the cylinder had been hogged out with a grinder so that cartridges would not chamber correctly, seating too deeply. This made the barrel and cylinder throwaways. But even worse, a 3/8 of an inch diameter hole had been drilled through the triggerguard flat just in front of the triggerguard bow, continuing up through the frame and through the outside wall of the cylinder. This hole in the frame was threaded, and a plug was screwed into it and extended into the cylinder, permanently locking the cylinder from turning. This totally deactivated the old Colt, as the hammer could not be cocked. My friend offered it to me at his cost. After checking it over, I found that the hammer and trigger were sound, and the major parts had matching serial numbers, so I decided it was worth trying to save, so I purchased it.

After a phone call to my favorite Colt SAA smith, Bob “Arizona Thumber” James, I shipped it to him to see if he could save it. A later phone conference and we decided he would plug the frame hole, install a 4.75-inch .45 Colt barrel, a third generation new cylinder with matching hand assembly, swap triggerguards with one he had removed from one of his personal Colts. He had originally shaved the right side of this triggerguard for faster trigger access, and being a top level SASS shooter, he was afraid it would not be allowed in major CAS shoots. And finally, he would perform a complete Fast Draw action tune. I had asked Bob to plug the hole in the frame without welding, if possible, and he was able to install a properly threaded mild steel plug with industrial grade adhesive. 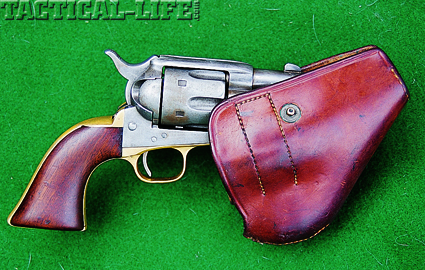 The aged ivory synthetic grips with longhorn steer skull are the perfect finish for the author’s Colt.

At first Bob was going to install a shortened barrel that didn’t have a front sight. But his parts box had a nickel plated 4.75-inch first generation barrel with original front sight. He later told me that he had pulled the junk barrel, and after installing the 4.75-inch barrel in the frame, it looked so good he just could not put it down. I was amazed when, three days after giving him the go ahead, UPS delivered my now shootable Colt SAA. The sixgun was originally nickel plated, though the plating was badly worn. It now was two-tone, with a blue cylinder and the rest nickel. I specially liked the grips, which appeared to be the original black hard rubber factory grips with a beautiful star shaped mother of pearl inlay surrounding the grip screw hole. After Bob buffed them, they were beautiful and added a lot of character to the old Colt. I was anxious to shoot it and went straight to my basement Fast Draw range and shot a Fast Draw practice session with wax bullets, and it performed perfectly.

A few months later I was visiting with friend Joe Bowman, who was performing as “The Straight Shooter” at Bill Oglesby’s Last Frontier annual SASS regional shoot. Joe was delivering one of his fantastic fully hand carved double holster rigs with a matched pair of custom sixguns. Seeing his beautiful sixguns, covered with Joe’s unique geometric pattern of decorative cuts, I recognized it as the perfect finishing touch for my shadow box Colt. Joe agreed to take it home with him and work his beautiful magic on it.

In February of this year (2003), my wife Kay and I drove to Orlando, Florida, to attend the SHOT Show. A highlight of any SHOT Show for me is locating Joe Bowman at the Ruger booth. But this year’s visit was special, as Joe mentioned that if we would come by his hotel room later, he had an “old Colt pistol” he thought I might want to see. Later that night we stopped by Joe’s room and picked up my “Bowmanized” Colt, which now had that perfect Hollywood sixgun look. Joe had placed a beautiful sunburst pattern on all major parts of the Colt, and it was barely recognizable as the well-worn old sixgun I had left with him.

Joe recommended Accurate Plating and Weaponry to refinish the sixshooter. A phone call to them provided cost information for high polish hard chrome and shipping instructions, and off the Colt went for refinishing. 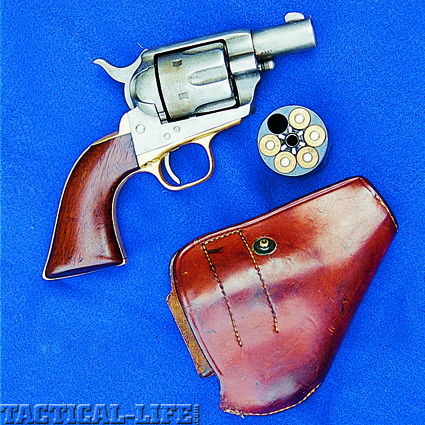 This 1882 manufactured Colt .44-40 SA has had the barrel shortened to two inches and is used in CAS with the replacement EMF cylinder shown. The holster is a rare custom Berns-Martin Speed holster.

A few weeks later the UPS man brought another special package. But rather than a worn old Colt, it contained a beautiful fancy Colt with a bright chrome finish that glistened like a diamond. The only fly in the ointment was that after fully assembling the Beautiful Joe Bowman-Bob James-Hollywood style Colt, the pearl inlayed black rubber grips that I liked so well just did not look right on this fancy sixgun. Remembering a recent article on grips for SAAs, I looked up Buffalo Brothers on the Internet, and ordered a set of their aged synthetic ivory grips with a long horn steer skull on the right side. After some minor fitting, these grips proved to be the perfect look for this unique Colt. This shadow box Colt will always be very special to me, as the efforts of two special friends turned it from a display-only junker into an heirloom.

Bob James and Joe Bowman, thank you very much.