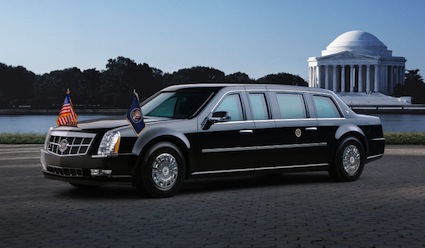 During the last presidential inauguration, the new President got most of the attention. As the motorcade proceeded down Pennsylvania Avenue, something else caught the camera’s eye—the President’s new car.

Often referred to as a “tank on wheels,” the presidential limousine is regarded as the top of the line in armored vehicles. Historically, presidential rides came on line when automobiles were first invented and have evolved with changing times and threats. According to White House archives, Presidents William McKinley and Teddy Roosevelt were the first presidents to use cars. They both used steam-driven cars, including the Stanley Steamer. When President Taft came to office, his purchase of a Model M Steamer was the first official “presidential limo.”

Cadillac’s first entry into the world of presidential transport was when President Woodrow Wilson rode in one during the World War I victory parade.

Evolution of Protection
When the United States entered World War II, the threats and protective web around President Roosevelt increased. In December of 1941, Roosevelt became the first president to use an “armored” vehicle. The car originally belonged to Al Capone; the car was seized by the Treasury Department in 1932 with Capone’s income-tax evasion charge. In reality, Capone’s cars only had bulletproof glass; the body of the car was still vulnerable.

In June of 1961, the Lincoln Continental limousine, used by President John F. Kennedy, included a series of removable steel and transparent plastic roof panels that could be installed in various combinations. It also contained a hydraulically operated seat, which could be raised 10.5 inches to give the gathered crowds a better view of the President and his guests. Up until this point, only parts of the presidential limos were armored.

After President Kennedy’s assassination, armoring the entire vehicle began, involving a secretive and lengthy process. After “up-armoring” the 1961 Lincoln, it weighed about one ton more than the original weight of 7,800 pounds. The up-armoring process increases the size and weight of any vehicle.
In 1972, in Hartford, Connecticut, a motorist traveling through an unsecured intersection struck the Lincoln Parade Limousine President Gerald Ford rode in. Due to the armor of the car, the President was not injured. 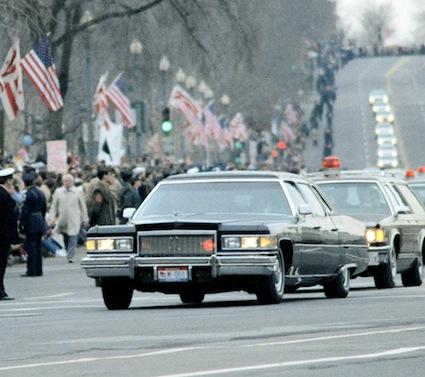 The presidential motorcade winds its way down Independence Ave. from the Capitol to the White House during the Inauguration Day parade, 1981.

During the 1981 assassination attempt on President Reagan, the FBI investigation revealed that some of the six bullets fired by John Hinckley struck the limo. Had the limo not been armored, those bullets may have impacted the President, changing history. In addition to the agents that saved President Regan’s life, the car did its job, too. 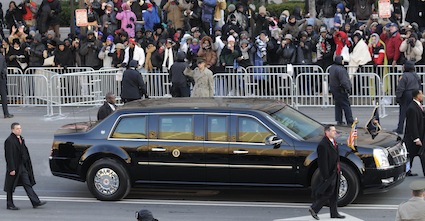 Cadillac One
On January 20, 2009, the new presidential limo “Cadillac One” made its debut down Pennsylvania Avenue. Large, imposing and mysterious, it marked the latest in presidential protection innovation. According to a January 14 press release, Secret Service Assistant Director Nicholas Trotta said, “Although many of the vehicle’s security enhancements cannot be discussed, it is safe to say that this car’s security and coded communications systems make it the most technologically advanced protection vehicle in the world.”

According to the limited information General Motors released, the New York Times, and information from the web, Cadillac One is a one-of-a-kind car. Although not confirmed, the Secret Service may have had it built from the ground up.

According to GM, “The 2009 Cadillac Presidential Limousine is the first not to carry a specific model name. The vehicle’s outward appearance is that of an enlarged Cadillac DTS limousine, however, the vehicle’s chassis and driveline are actually sourced from the GMC Topkick commercial truck. Styling elements are sourced from a variety of GM vehicles. For example, the car uses Cadillac Escalade headlights, not DTS units.”

The interior of the car is essentially an Oval Office on wheels, with reclining seats and room for four. There are reportedly state-of-the-art electronics communications and video centers with a fold-out desk and plenty of creature comforts. The car allows the President to do the nation’s business from wherever he is, in safety and comfort. With the exception of the apparent Cadillac signage, GM’s footprint probably ends there.

The available reports indicate that the car has bulletproof glass, armor throughout, and hermetically-sealed doors to withstand chemical/biological weapons. With its truck chassis, the car is Kevlar reinforced, capable of withstanding explosives and heavy weapons. The exterior is most probably made of hardened steel, titanium and aluminum, with a ceramic coating to resist armor-penetrating rounds and chemical/biological attacks. The doors are reported to be 8 inches thick, weighing the same as the door of a Boeing 757.

According to a National Geographic special, Secret Service drivers are highly and specially trained in tactical driving. The car’s dashboard reportedly features a GPS tracking and communications center, fresh air lockout controls, interior oxygen system, fire suppression controls, chemical/biological agent decontamination capabilities and nitrous oxide or similar speed boosting system. Additionally, there is a gas tank shutoff system with the ability to switch to an alternative tank if the primary goes down is a feature on high-end cars, like racecars.

The windows of the car are all armored but remain translucent so an American public, used to seeing their President, can continue to see him. Like some military vehicles, the wheels are probably reinforced with Kevlar. They are tear and rupture resistant, with steel reinforcement, “run flat” capabilities and a backup inflation system that allows the car to continue rolling if struck. A 6,500-cc diesel or similar sized engine must power this “Beast” with a reported top speed over 60 mph and maneuverability not normally associated with a car this size.

Speaking of size, when lined up next to a Suburban, the car is the same height if not taller. It also appears to have substantial ground clearance, which indicates they may have incorporated some lessons learned from the military’s MRAP.

Cadillac One is probably equipped with assault grade armament, night vision, tear gas and other defensive capabilities. It’s also been conjectured that the trunk has a full medical setup for the President, including carrying his blood if needed for an emergency transfusion.

Topping off this machine is the flag of the United States and flag of the President on the front fenders with LED features to illuminate the flag at night.

Getting There
According to National Geographic, the U.S. Air Force transports the presidential limo worldwide. It takes a C-17 or a C-5 to lift and carry this vehicle to wherever it is headed. If the President is headed to several places, several Air Force planes are used to transport these cars around the globe.

Cadillac spokesman David Caldwell said, “What’s developed for this vehicle is unique and remains very private and secretive. Another nation could not call us and say, ‘let’s do that.’”
When a Secret Service agent was asked about the capabilities of the car, the agent replied, “It’s a very capable car. The only thing it can’t do is float.” 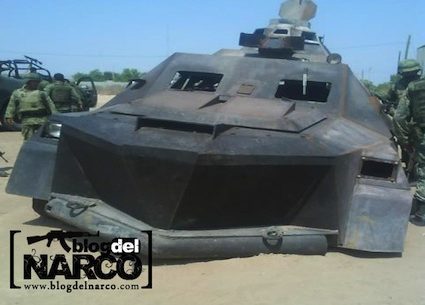 During the last presidential inauguration, the new President got most of the attention. As…