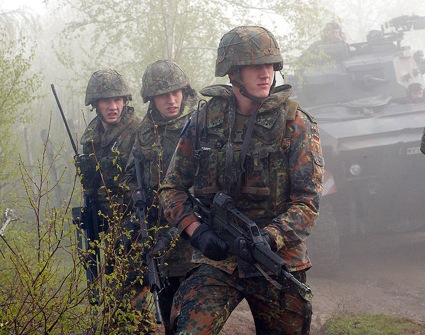 German ordnance engineers have a long and productive history of exploiting the leading edge of technology, and of taking the practical path of incorporating that part of the leading edge which proves workable, and not looking back at that which might have been.

When, due to the costs of reunification, financing was not available to follow the G11 caseless ammunition rifle design to its logical conclusion, German engineers did not rest. In 1991 H&K was purchased by Royal Ordnance (England), the new consortium embarked on Project 50, which was to come up with a new design that would compete with the Steyr AUG to replace the G3 rifle and Uzi SMG in German service.

The HK50 evolved into the HK36, which did not see serial production. The G36 is based largely upon ideas from the HK50/HK36 design, which in turn appear to share some design DNA with the Sterling SAR87, the British SA80 and to the ArmaLite AR-18 from which that was developed.

Unlike earlier HK designs that made extensive use of sheet-metal pressings, the G36 makes extensive use of carbon-fiber reinforced polymer. Also gone is the roller-locking bolt of the G3 series, which has been replaced by a two-piece short-stroke gag system (as used in the WWII German G43 and Soviet Tokarev M40 rifles) that operates a multi-lugged rotating bolt similar to the ArmaLite weapons.

The extensive use of polymer includes the upper and lower receivers, handguard, folding stock, magazine well and carrying handle. The G36 is one of the most thoroughly modular rifles ever made: Without need of tools virtually every component can be removed and replaced simply by pushing out an assembly pin, and a new part traded.

The G36 bolt is housed in a slab-like machined steel carrier, and it features an M16-style extractor and the usual plunger-type ejector. Inside the bolt carrier are a series of tungsten discs that serve as an anti-bounce mechanism. With a more conventional rotating bolt, the extraction is no longer so abrupt that it requires a fluted chamber, and that has been dropped. Unusual for an HK design, the G36 has a reciprocating operating handle, which can also serve as a forward bolt assist. It has an automatic bolt hold open feature, which can readily be disconnected. 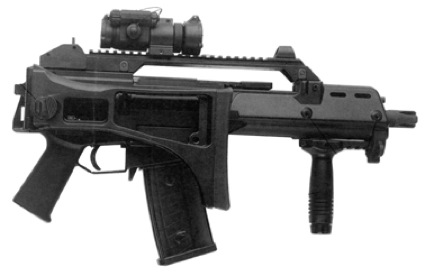 The G36 is being issued in all the usual variants, including an LSW (Light Support Weapon), and very compact models, and a semi-auto sporting version the SL8-1.

During exercise Joint Resolve 26, in Bosnia and Herzegovina (BiH), soldiers from the German…