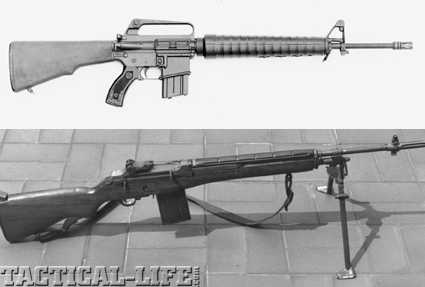 (Top) With production in selective fire intended for the international military market, and in semi-auto only for the American sporting market, the CQ copy of the M16 fell victim to poor military sales, and a U.S. ban on Chinese rifles. (Bottom) Chinese selective-fire copy of M14, captured from communist guerrillas in the Philippines.

At various times, “foreign” rifles have been made outside their country of origin for a variety of reasons: to break an arms embargo, to acquire them more cheaply, to make them more cheaply to compete in the export market, as counterfeits for “sterile” use, and sometimes for no discernible purpose. Past masters of the copyists art, the Chinese have produced, and continue to produce, copies of standard American military small arms. These are not Kyber Pass copies, but as a whole are of decent quality.

In the 1970’s the PRC manufactured an almost exact copy of the U.S. M14 rifle. It was of usable quality, if not exemplary in fit and finish, and most parts interchanged with U.S.-made M14 rifles.

The Chinese copy was mostly supplied to Chinese guerrilla client groups, including those in the Philippines, where it was issued complete with steel-case ammo bearing bogus British headstamps. A semi-auto only version was briefly imported to the USA, which showed good metalwork and uniformly poor wooden stocks.

The CQ, known as the 311 in its semi-auto only version, was an effort by China North Industries (NORINCO) to produce a copy of the M16A1 rifle for export. All metal parts are identical in design and appearance to a U.S. made M16A1, but the synthetic furniture is distinctly Chinese. The selective-fire CQ was sold on the international market, with some going to the Afghan rebels during the Soviet/Afghan War. Quality was considered poor. Some of the semi-auto 311 rifles were imported to the U.S. prior to the ban on the import of Chinese rifles in the 1990’s. Tests conducted by Small Arms Review gave these weapons good marks for quality, if not for appearance. An Iranian version of the CQ called the S-5 is offered for sale by the Iranian Defense Industries Organization, made on tooling for the GQ bought from China.

The current Chinese offering is the CQ-A, a line-for-line clone of the U.S. M4 carbine, of merchantable quality, which is being sold on the international market for about half the price of a U.S.-made M4. 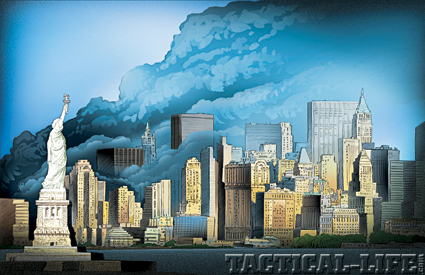 (Top) With production in selective fire intended for the international military market, and in…