by Tactical-Life.com
in Exclusives, Guns, Rifles
0

With the success of bull-pup designs such as the French FAMAS and Austrian AUG, in the early 90s, the VEKTOR division of Denel began development of an indigenous South African bullpup rifle.

RELATED: Best of the Bullpups: Top 10 Compact Rifles and Shotguns 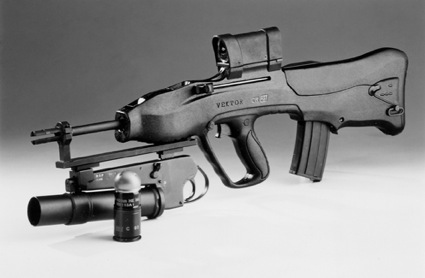 Although the operating mechanism may be a tried-and-true 60-year old Kalashnikov design as adapted for modern application, the scion Vektor CR21 (Compact Rifle 21st Century) presents an interesting esthetic, ergonomic controls and some unique design features.

It essentially comprises an R4 barreled action in a new synthetic bullpup stock. R4 parts have been modified as required to make the new configuration work, including the cocking handle, trigger, selector and sights. In fact, there are no iron sights on the CR21, just an optical sight base mounting a 1X reflex sight, which can be swapped out for a section of Mil Std M1913 rail on which myriad sighting devices can be mounted.

The CR21 features a full-hand trigger guard, an ambidextrous fire-control lever, moveable sling swivels, and downward-deflected ejection to accommodate left-handed shooters. The non-reciprocating cocking handle mounts on the left side. The magazine release is also ambi, and the magazine, resembling an R4 magazine, comes in 20 and 35-rounds.

In 5.56×45 NATO, the CR21 can fire rifle grenades, and can also mount a 40mm grenade launcher. A barrel-mounted adapter will accommodate a bayonet, laser target designator, lights and other accessories. It is expected to serve the South African military well into the 21st Century, and is being offered for export s well.