It started life as the MKb 42(H) (Machine Carbine 1942 [Haenel]). When Hitler expressed his disfavor with the concept, development continued behind his back, cloaked under the name MP.43 (Machine Pistol [submachine gun] 1943). When in 1943 Hitler decorated three division commanders, as was the custom he asked what he could do for them. To a man they said, give us the MP.43. Although taken aback that production had been continuing behind his back, and was successfully being employed in the East, Hitler was astute enough to finally recognize a good thing, decreeing a monthly production of 30,000 units, as the MP.44. Later, General Jaschka suggested it be renamed the “StG.44” (Sturmgewehr [Assault Rifle] 1944). Hitler agreed.

There were earlier competing designs, and once the genre was accepted, other companies began unofficial projects, but it was the StG.44 that saw substantial serial production, was dramatically successful, and established the concept forever.

Unusual aspects to the StG.44 include its extensive use of sheet-metal pressings, cast or welded parts, and requiring a minimum of “strategic” steel alloys. It was one of the few times in that era where parts, components and sub-assemblies were successfully manufactured by subcontractors and assembled by a third party: Under war-time shortages, clear testament to German engineering/manufacturing expertise.

The Haenel action was operated by a long-stroke gas piston, acting upon a dropping-type, fully locked bolt. The weapon fired a 7.92x33mm bottle-necked intermediate round with a velocity of 2,250 fps, feeding from 30-round box magazines. It was selective fire with a cyclic rate of 600-700 rpm, weighed slightly more than 11 pounds loaded.

Like any successful design, many accessories were made for the StG.44, including muzzle attachments to shoot around corners—which actually worked—night-vision scopes, ZF.4 scope mounts, and cup-type grenade launchers. 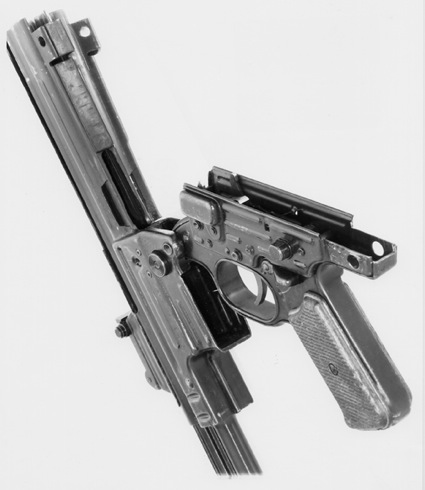 More than 430,000 were manufactured of all models. It is unknown how many survived WW II and where they went, but until recent times the 7.92×33 round was manufactured in Eastern Europe. After the StG.44 was deployed, infantry weapons, and the manner in which they are fabricated, would never be the same.