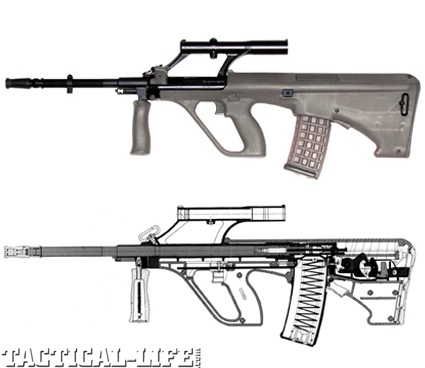 Even in combat, the rifle, the basic weapon of ground forces, is carried much more than it is shot. Thus it follows that anything that can be done to make it easier, handier to carry is worth consideration. From this need sprang the bull-pup rifle, a concept that has often been tried experimentally. Not until the Austrian Steyr AUG (Armee Universal Gewehr), however, was such a design successful and widely issued. A contemporary development of the AUG was the French F.A.M.A.S., which we will cameo in a subsequent issue.

With a thriving export arms market, the Austrians have widely exported this weapon, and licensed production has been undertaken in Australia as the F-88, and in Malaysia. It is also the standard rifle in Ireland and New Zealand. Well over a dozen variants of the basic AUG have been built, including light machinegun versions firing from an open bolt.

Development began in the early 1970s at Steyr-Daimler-Puch as the “UIW – Universal Infanterie Waffen” but by the time the design was adopted by the Austrian Army in 1977 as the StG 77, it had become universally known as the AUG. Aside from its bull-pup design, the AUG exhibited many leading-edge features—not the least of which is the use wherever possible of advanced synthetics: Even parts such as the modular trigger group including the hammer, sear and disconnector are synthetic. The stock itself is made from fiber-reinforced polyamide 66, made in two halves and friction-welded together.

The receiver itself is cast from high-grade aluminum alloy. The bolt is basically similar to the AR-18, operated by a short-stroke piston, rotating and fully locked at the moment of firing. The firing modes include Safe, Semi, Full-Auto and 3-Round Burst. The unusual-appearing but very ergonomic stock features a full-hand trigger guard and a folding front pistol grip. The design allows rapid changing to left-hand ejection to accommodate left-hand shooters. The standard receiver has a built-in 1.5 optic in a carrying handle. Special receivers are available without this sight, which can mount virtually any sight in its place. Standard magazines are translucent synthetic of 30 and 42-rounds; The “NATO” variant uses STANG (M16 type) magazines. The AUG can mount an M20340mm grenade launcher, and as a design that has been in production for more than three decades, all nature of accessories are available.

Even in combat, the rifle, the basic weapon of ground forces, is carried much…