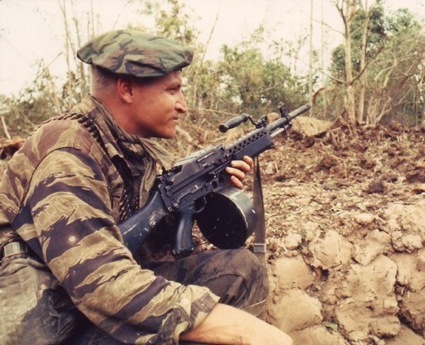 A U.S. Navy SEAL in Vietnam keeps his Stoner 63A light machine gun at the ready while the rest of his squad prepares demolition charges on a Vietcong bunker. Photo Source: Navy/National Archives

As the name implies, the Stoner weapons were the creative fruits of design genius Eugene Stone, father of the AR-10 and M16 family of weapons. The first prototype of the series, carefully designed not to infringe on patent rights for the M16 which had been sold, was the Stoner M69W, which could be configured as a rifle or as a belt-fed LMG in 7.62x51mm NATO. Although designed to be fabricated from pressed sheet metal, the original prototype was machined from aircraft aluminum alloy. It was made only in prototype form.

Working under contract to Cadillac Gage and with assistance from L. James Sullivan and Robert Fremont, the Stoner 62 was made from sheet-metal pressings, and like the M69W could be configured as a battle rifle or a belt-fed LMG.

As world-wide interest was growing in the 5.56x45mm cartridge, Cadillac Gage asked Stoner and his team to reconfigure the system to the Stoner 63 weapons system, which could be configured as a squad automatic with a top feed, a belt-fed LMG or as a rifle, or with some great parts interchangeability. It operated by a long-stroke gas piston acting on a bolt a rotary head and multiple locking lugs. It fired from the open bolt position in the LMG configurations and a closed bolt in the rifle and carbine versions.

Limited numbers were procured by DoD in various configurations for test and evaluation. In Vietnam when tested by Marines the only problem reported was getting them back from Marines who did not want to give them up. The Marine Corps reported that the Stoner 63 and 63A were suitable for issue to Marines with no further testing necessary. Issued to SEALs, who never did give them up, Stoners continued in SEAL inventory for some years after the war.

A version of the Stoner was tested by the Air Force as a survival weapon, and belt-fed versions of the Stoner System were also built into aircraft pods. When the DoD decreed that they would stick with the Devil They Knew, the M16, there was no further consideration of U.S. issue of the Stoner. A European consortium lead by Dutch manufacturer NWM purchased production rights for the stoner and converted the design to metric standard, but there were no sales and no production.

Had this cleverly conceived and expertly engineered design been adopted and enjoyed the decades of evolutionary improvement from which the M16 series benefited, one could but speculate the successes it would have enjoyed. 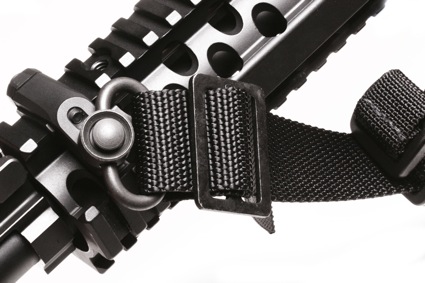 A U.S. Navy SEAL in Vietnam keeps his Stoner 63A light machine gun at…