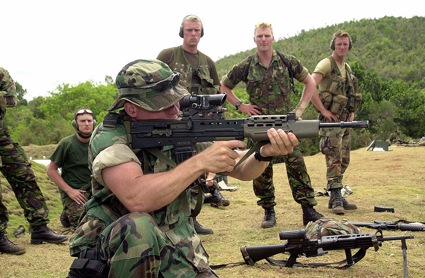 It began in the basic envelope it is in now, as the SA-80, and it subsequently was type classified as the L-85A1, and was also is produced as the L86A1 Light Support Weapon (SAW) and other mission-specific variants. The SA-80 was an evolutionary development of the EWS (Enfield Weapon System) in caliber 4.5x49mm, development of which was ultimately discontinued in that caliber.

The SA-80/L85 series has been issued as an infantry weapon, and as a light support weapon, and in other variations. Above and below are shown with the SUSAT sight. Photos: Courtesy Dan Shea

It is Britain’s first bull-pup design to be fielded, and it includes many features adapted from other designs such as the ArmaLite AR-18 that were considered to be worthwhile, but field experience almost universally indicated that the assembling of these various design features was not very well executed in this particular envelope. The SA-80/L86 could be honestly characterized as having been intelligently conceived, but inadequately engineered and tested. The beleaguered weapon ended up being the subject of Parliamentary inquiries, which concluded that major problems with the design were the result of it having been put into production with virtually no end-user input.

In light of poor experience with the weapon in the 1991 Gulf War, and in Bosnia and elsewhere, in 1996 the Government wrote of a set of standards that an infantry weapon should meet, and the SA-80/L85A1 failed. Thus In 1998 the British government let a contract with Heckler & Koch’s Merkel Division to do a fix: more than $100 million for the existing 200,000 rifles. Parts receiving corrective attention included the breech block, bolt, extractor, ejector, recoil spring, firing pin, cocking handle, magazine, gas plug, gas cylinder, hammer and barrel extension. Other evolutionary changes had already been made to address a number of other problem. Starting in 2008, the weapons have further been upgraded with the addition of MilStd M1913 rails top and bottom, and a GipPod mounted on the bottom rail. These are designated the L85A2 Improved.

The weapons family now serves successfully with British forces worldwide, although some SpecOps forces use variations of the U.S. M4 carbine. 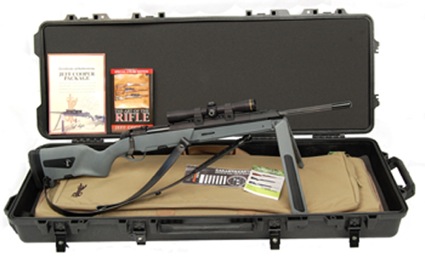