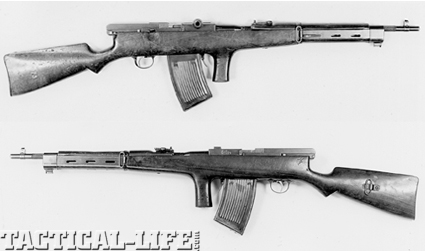 As first in a series of weekly cameos featuring assault rifle designs from yesterday’s wars to today’s drawing boards, it seems reasonable to start with the first assault rifle issued, the Fedorov Avtomat. A description of the Avtomat’s characteristics will also serve to define what is indeed an assault rifle (members of the Fourth Estate, are you paying attention?).

Put into production in 1916 and called the Avtomat (“automatic”) to signal it was a new type of weapon, it had the three lynchpin characteristics of an “assault rifle:” it was selective fire, it fired a smaller rifle-type cartridge, and it had a detachable magazine. Although the term “assault rifle” (“sturmgewehr”) would not be coined until the next war and endorsed by a sociopath corporal who made the big time, the Fedorov also had the other characteristics of a “classic” assault rifle: It was designed to prevail at shorter range in launching or repelling an assault; it featured a straight-line stock and had a pistol grip for control. 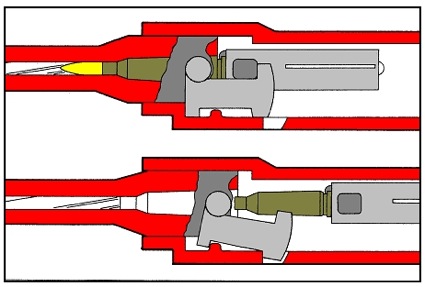 Early in his career, Fedorov conceived an auto-loading rifle based on the Russian M1891 Mosin bolt-action rifle, an oft-proposed, seldom successful idea that in his case didn’t get beyond concept. He next designed the M1907 auto-loading rifle for the 7.62x54R Russian round, and a variant the M1912, of which 150 were built for evaluation. The design was not adopted, but it was apparent to Fedorov that such designs might work best with a less-powerful cartridge.

He designed a new weapon and a new, less powerful rimless 6.5mm cartridge, put in production in 1916, but war-time shortages precluded large-scale production of a new round, and his existing “Avtomat” weapons were converted to 6.5x50SR Japanese, available as booty from the Russo-Japanese War (1904-05).

In 1918 the Red Army ordered 9,000 Avtomats; 3,500 were actually produced and they saw service in WW I and the Russo-Finnish War. Short-recoil operated and feeding from a 25-round magazine, the Avtomat was selective fire with a cyclic rate of 600 rpm. It weighed 4.4 kilos (8.8 pounds).

His last design was a selective-fire rifle in 7.62x54R, the Model 1925, built for trials specifying selective-fire and a bayonet capability. Not adopted, it had a five-round [!] integral magazine, fed by chargers.