by Brandon Butler
in Exclusives
0

Your best personal defense tool is your mind and the information you put into it. This includes what you extract from your training in mental preparedness and the use of techniques or equipment. The mind is our most dangerous and most valuable weapon. As a result, people are capable of extraordinary feats—things one would not expect to be possible.

For example, we would not expect a 70 year-old granny to be able to lift a car off of her granddaughter. Likewise, we would not expect one soldier to be able to single-handedly kill a platoon of enemy soldiers and save his squad. Nor would we expect a 98-pound female police officer to survive a .357 magnum shot to her heart, to return fire, and take out her 300-pound would-be murderer. Yet the right mindset made it possible for each of these heroes to prevail. Thus, it is clear that mindset can transcend most limitations—physical challenges, flawed personality traits, cognitive limitations, and so forth. So, the question is: what are the elements of the survival mindset that will assure victory in a combative situation?

Willingness
Willingness means that we are ready to do whatever we need to do to survive a violent encounter. When we are willing, we will take the initiative and speedily, ruthlessly and mercilessly close the gap between a violent attacker’s actions and our defensive reactions. This is the counter-ambush mentality. Actually, we don’t defend. We counter-attack. After all, it is our life that is at stake!

Do something. Don’t dither. Noted defensive firearms instructor and author, John Farnam, is known for teaching that in a fight for your life, to dither is to die. You cannot afford to hesitate or freeze. You must always be doing something. Doing something is better than doing nothing.

Hesitation means death.. In The Shootist, John Wayne’s final film (1976), he played an aging and ailing gunfighter, John Bernard Books, who is asked by his protégé (Gillom Rogers, played by Ron Howard) during a shooting lesson, “Mr. Books, how is it you’ve killed so many men? My spread wasn’t much bigger than yours.” To that John Wayne (Books) answered, “First of all, friend, there’s no one up there shooting back at you. Second, I found most men aren’t willing; they bat an eye, or draw a breath before they shoot. I won’t.”

Fear is normal and okay. Fearlessness is not always okay. It could be detrimental to survival as it could lead to recklessness. Courage means that even if you are afraid, you do what you have to do. In his book The Gift of Fear, Gavin de Becker talked about fear as a survival signal that alerts us to potential violence and danger. Thus, it is a signal that should be heeded, similar to physical pain. Heed fear’s signals and evaluate your risk profile. Unevaluated by a clear mind, fear becomes a phobia, panic, or “free-floating anxiety”. Evaluated by a rational mind fear can be transformed into righteous anger. President Franklin D. Roosevelt said on the eve of World War II that “The only thing we have to fear is fear itself — nameless, unreasoning, unjustified terror which paralyzes needed efforts to convert retreat into advance.” He wasn’t talking about fear that freezes you into inactivity. That’s fear that can get you killed. 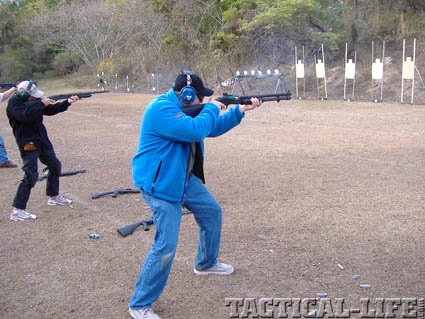 With proper training the little guy can develop the skills to control his powerful 12 gauge.

Awareness
Awareness means that you are attuned to what is going on in your world. It means you see it coming. It doesn’t matter how good a fighter you are, if you do not see it coming, you’re in trouble. Wild Bill Hickok was shot in the back of the head by a psychotic coward because he let down his guard. You need to see it coming to take action. Cultivate your awareness. It can save you from an ambush.

The street has no mercy. Life on the street is unpredictable and that unpredictability could follow you home. In order to survive you need to be flexible and develop good mental preparedness. This means that you have to condition your attitudes and responses to keep you alert, attentive and aware of your need to stay alive; that is, keep your eye on the ball.

The “Philly stomp”. Some years a ago, at a Phillies game, a young man got stomped to death in the parking lot of Citizens Bank Park by two men who had followed him into the lot. They came to attack him after words had been exchanged at an eating and drinking establishment in the ballpark. Unfortunately, he did not see it coming. The murderers were known rowdies and the victim has been part of a bachelor party. If the decedent had seen it coming, had been carrying a gun, and knew how and when to use it, he might not have become the decedent.

In a similar vein, on a Philadelphia subway platform, several years ago, in the wee hours of the morning, a twentyish year-old man traveling home from his late night job as a barista at Starbucks was attacked and beaten to death by a wolf pack of teens. Again, if the decedent had been carrying a gun, and if he knew how and when to use it, he might still be alive today. Carrying a gun is just a smart self-defense choice.

Being aware also means that you take note of what you see and hear around you. Be a good witness. Train to remember car makes and models, license plates, the way people look and how they sound, what they are wearing, their height and size, etc. 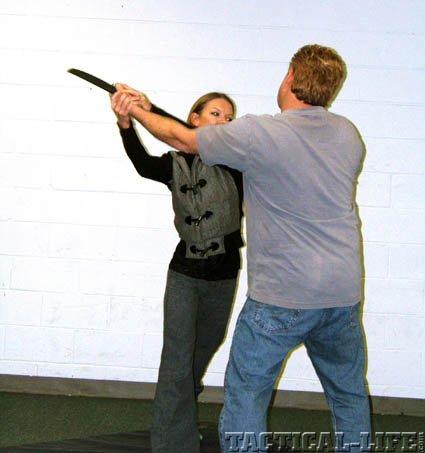 Only mindset can save this would-be victim. Who is the victim? 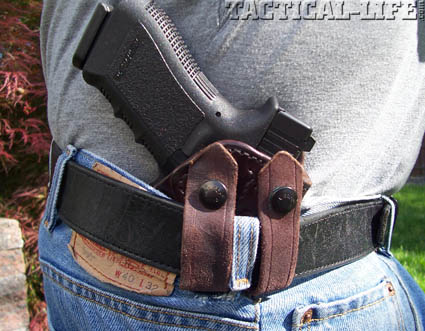 Good equipment such as this Glock 17 in a horsehide Kramer IWB #3 holster is just one element of readiness and preparedness.

Readiness
Readiness means you are prepared to go. It means that you can turn the switch on the second that you have to do so. To be ready to go, you have to be prepared physically and mentally. You must have the necessary combative skill set and the right gear and equipment for the job. And you need to have the combative mindset-willingness, awareness, and readiness. Remember, no matter how aware you are, you can still be ambushed. So, you need to be ready-all the time.

Preparedness means being able to transfer skills from one setting into another to assure your survival. For example, most women are not afraid to yell at their husbands, but in a clutch tactical situation, they may become submissive. Therefore, my advice is if you are assaulted, treat your assailant the same way you treat your husband! More seriously, what I am saying is that you must be prepared to seize control of the situation. Control is better in your hands than in the hands of the criminal.

The reason to carry a gun is to be prepared and ready. The late Colonel Jeff Cooper said, “an unarmed man can only flee from evil, and evil is not overcome by fleeing from it”. Today his words ring as true as they did when he said them years ago. However, if you choose to carry a gun, you need to recognize that the reason you do so is for personal protection, not to transform yourself into a would-be superhero. The purpose of concealed carry is to return home safely, never to win arguments.

Expect the worst and hope it never happens. Without adequate preparation, your chances of survival are markedly reduced. Therefore, a useful exercise adapted from the work of Jeff Cooper (1989) is to practice mentally going over “what if” scenarios in your head. What if the worst happens? What will I do? For example, what if two armed men break into your home at 2:00 AM? What would you do? Mentally rehearsing self-defense strategies and tactics and preparing for them mentally and physically can give you the edge you need to survive.