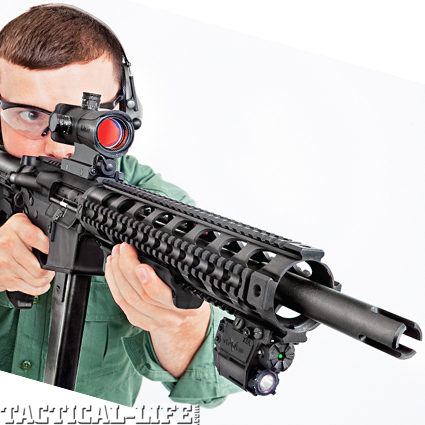 A carbine adapted to fire .45 ACP like the BAZ45 allows the rounds to reach their maximum potential in terms of velocity and accuracy.

A revival of the M3 .45-caliber submachine gun, more commonly known as the “Grease Gun,” is taking place at Bazooka Brothers Manufacturing. Unsatisfied with the original’s departure from the battlefield in the 1950s, the company is producing an updated version in the form of a .45-caliber AR-15. Instead of completely redesigning either weapon, Bazooka Brothers’ offering, designated the BAZ45 Carbine, combines the best components of each into a single modern and familiar platform built not only to fire the Grease Gun’s ammunition, but also to accept its unique 30-round magazine.

To achieve functionality with .45 ACP, the BAZ45 combines a Bazooka Brothers-designed lower receiver manufactured by REO Engineering and an RMW Extreme direct impingement upper receiver, both assembled into a complete weapon at the Bazooka Brothers shop in Russiaville, Indiana. Though unique in its design, the BAZ45 follows the familiar setup of an M4 and other AR-15 platforms and is available in both semi- and full-auto models. Its lower receiver is CNC-machined from a solid billet of 6061 stainless steel that has a Type III hardcoat-anodized finish. It includes DPMS parts, which are interchangeable with all Mil-Spec lower kits, and requires no specialty pieces.

Several significant modifications were made in the lower’s design, only one of which was necessary to alter the caliber to .45 ACP, the rest included simply to improve overall function. The most obvious modification is to the magazine well. Here, the lower is cut to the size and shape of the Grease Gun or stick magazine, wire EDM’d, flared to assistant docking, and then anodized. To improve functioning and ease of installation, a threaded bolt is used in the bolt stop rather than a pin.

The rear takedown pin detent hole has also been threaded and includes a set-screw to allow its stock to be removed without the worry of losing the spring or detent during field maintenance. To strengthen the lower, its winter-style triggerguard is forged with the receiver and additional material is added to the area surrounding the buffer tube. For style and branding, the company’s logo, a plastic green army man holding a bazooka like a childhood toy, is etched on the magazine well. A Leapers six-position collapsible stock rounds out the lower half of the weapon. Molded from impact-resistant polymer, it features a push-button release on its base that allows the user to pull the stock rearward to the desired length.

Unlike the handful of other .45 ACP AR-15 upper receivers in production, all of which rely on blowback systems, the RMW Extreme installed on a BAZ45 is direct impingement. Made of stainless steel with a 1-in-8-inch twist, it is compatible with standard AR-15 parts.

Its only deviation is a bolt face modified to accept the .45 ACP and a proprietary gas block. By using a direct impingement system, the BAZ45 avoids failures common to blowback systems that allow excess carbon to build up and degrade the weapon’s function. The advantages of this design are extensive and include reduced felt recoil, reduced muzzle rise, a cleaner chamber and parts commonality. 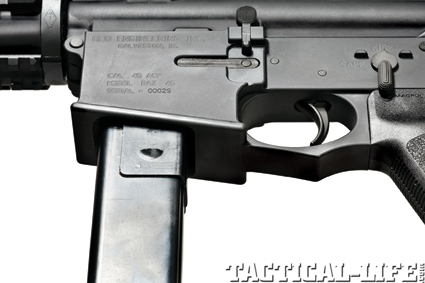 Built for the unique 30-round magazine of the 1940’s Grease Gun, the BAZ45 combines old and new.

Though standard-cut M4 handguards are requested by some customers, the RMW Extreme normally installed on the BAZ45 allows unrestricted modification with a free-floating handguard consisting of four Mil-Spec Picatinny rails, each providing ample space to mount accessories on the top, bottom or sides, based on user preference or operational need. Three different models of the .45 ACP RMW Extreme upper are available, a right- or left-handed A3 flattop with an 11.5- or 16-inch-long barrel, and an A3 flattop with an 11.5-inch barrel and a 5-inch-long permanently attached flash suppressor. Used to reduce the visibility of burning gases that exit the barrel, the flash suppressor on the RMW Extreme is included to reduce chances the shooter will be blinded in low-light conditions.

Fully assembled and shipped from the Bazooka Brothers shop, a complete BAZ45 measures 28 to 36 inches, depending on upper receiver selection, and comes equipped with a 1X Lucid red dot sight. Weighing in at 13 ounces, the Lucid HD7 has four available reticle patterns, a 2X screw-in eyepiece, and is powered by a single AAA battery. Those desiring something more than the production model can order what Bazooka Brothers considers their fully dressed or Deluxe Carbine, which comes with a Leapers vertical foregrip, Lucid HD7, Viridian X5L and a modified Suomi 50-round drum magazine.

The Viridian XL5 is a combination green laser and white light with a range of 200 yards in daylight and up to 2 miles at night. Both the light and laser have multiple operating modes, including constant on, strobe and blink. The Suomi drum magazine is converted for use in the BAZ45 with the addition of an M3 feed tower, giving the weapon the feel of a lightweight Thompson submachine gun.

Pistol-Caliber Carbine
Designed in 1904, the .45 ACP has a proven combat record that combines both accuracy and stopping power. Even in its non-expanding full metal jacket version, the round’s large diameter provides assured knockdown of human targets by causing deep and substantial wound channels that rapidly lower blood pressure. A carbine adapted to fire it achieves several benefits over both .45 ACP handguns and AR-15 platforms chambered for .223 or 5.56x45mm. Its extended barrel length allows shooters to maximize the .45 ACP’s potential in regards to velocity and accuracy, with the carbine barrel producing much higher pressures than those that would be recorded in a handgun. This higher pressure serves to increase velocity, improving the round’s performance by raising its potential for accurate close-range shots and, against human targets, remote wounding and defeat of body armor. 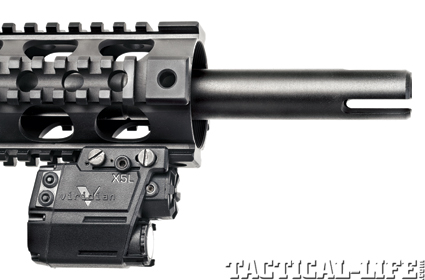 From the carbine, velocity of 230-grain ball ammunition is 930 FPS (feet per second) while 185-grain cartridges exit at 1,400 FPS—an improvement over a handgun barrel of more than 200 FPS. Despite the increase, the lesser-caliber .45 ACP, in comparison to 5.56x45mm ammunition designed for open warfare and enemy targets hundreds of yards away, limits concerns of over-penetration, an important factor when operating in urban environments or where there is a potential for missed shots to cause unintentional collateral damage. The .45 ACP also causes substantially less recoil and audible noise compared to 5.56x45mm ammunition. In the BAZ45, the felt recoil can be described as that of a .22LR.

Bruce Sumner, the owner of Bazooka Brothers Manufacturing, provided some insight on why he made the switch to .45 ACP and is pioneering its development in an AR-15 platform. As a competition shooter in submachine gun matches, he is very familiar with the M3 Grease Gun and Thompson submachine gun. Though a fan and proponent of both weapons, he experienced several issues that lowered his scores during competition—those same factors that negatively impacted operational use of the weapons by militaries and law enforcement and lead to their eventual replacement.

The Thompson is heavy, awkward, and it is difficult to control in full-auto. In contrast, the Grease Gun is lightweight and easy to manipulate, but has a slow rate of fire and is prone to wandering off target. To solve each of these issues, he looked at the AR-15 design and immediately recognized it would provide both stability and improved performance of the .45 ACP. Some of its dimensions would also closely match those of the older weapons, both in the 30-inch range for overall length, with the Grease Gun measuring 29.8 inches long when its retractable stock is extended, but would be lighter in weight and easier to control. Working from this concept, he designed the BAZ45, a weapon he eventually sees in the hands of forward-thinking law enforcement agencies who need a specialty weapon for close-quarters engagements that maximizes accuracy and stopping potential while simultaneously tempering the risk of collateral damage. 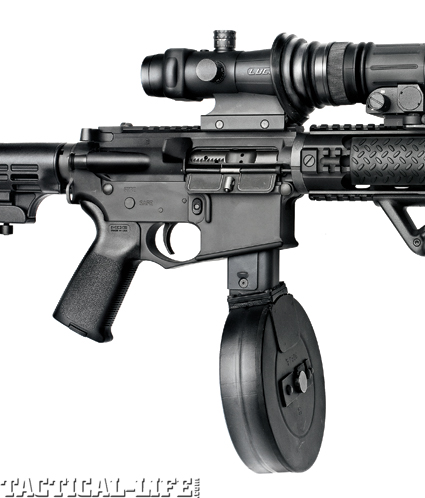 Drawbacks
There are a few drawbacks in the design. The BAZ45 is sensitive to weak ammunition and requires premium loads to function reliably. Ron Williams, who manufactures the upper, recommends removing the weights in the buffer if cycling issues occur for the initial 250- to 300-round break-in period before experimenting with other loads. The price tag associated with these premium loads is high and can quickly rack up an expensive bill.

Another issue comes when the final round in the Grease Gun magazine is fired. After this round is ejected, the bolt will not lock to the rear as expected because the Grease Gun magazines lack the necessary follower. For shooters who fail to count every round, this can be a major problem when the trigger is pulled on an empty magazine—they are left trying to determine if there was a malfunction or a reload is needed. Because of this, immediate action following a misfire would have to include a magazine change or pulling the bolt back to check condition early in the process. Another issue is the length of the Grease Gun magazines, which make prone or bench shooting impossible. Their dimensions limit options for cover and restrict firing stances to standing and kneeling positions to provide enough clearance for the magazines.

Lastly, the effective range of an AR-15 is severely reduced by the pistol ammunition, with bullet drop noticeable beyond 100 yards. Inside this range, the rounds are extremely accurate due in large part to the velocity at which they exit the barrel but also because of reduced recoil and muzzle rise of the carbine. As their limit is pushed, though, the bullet weight creates a steep trajectory curve and the drop becomes visibly noticeable. 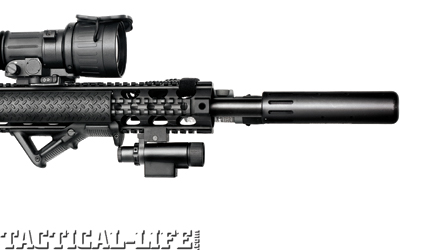 Knockdown Power
In summary, the BAZ45 doesn’t come close to a replacement for the 5.56x45mm AR-15, but it is a good weapon for short-distance target shooting in competition or for an entertaining day at the firing range. Virtually everyone can shoot more accurately with a low-recoiling, shouldered-fired weapon than with a handgun, and by keeping all of the controls and functions the same as the familiar AR-15, the BAZ45 can be picked up and used by anyone trained on the platform. Operational use by militaries or law enforcement remains unlikely, however, several BAZ45 carbines have been supplied to individual LEOs around the country. Because of effective range limits and those design issues that restrict shooting positions and make the cause of misfires more difficult to investigate, there are just too many negatives for these groups to even consider its adoption.

Though resurrected from the battlefields of World War II, the .45 ACP carbine, at least as conceived with the BAZ45, has little chance of seeing action in a modern war, but has found a niche in the civilian market where it not only wins competitions but sparks conversation. 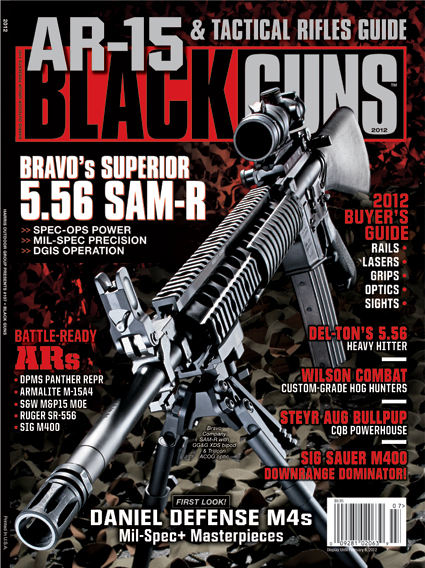 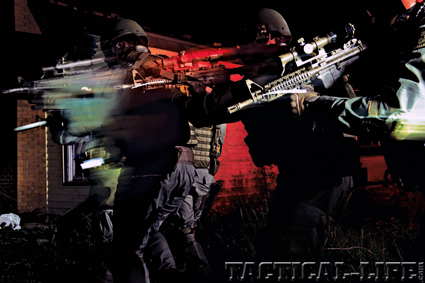 A carbine adapted to fire .45 ACP like the BAZ45 allows the rounds to…