by Donald J. Mihalek
in Exclusives
0

Now reality TV meets the real world—all on the internet. Maximum Warrior is a new, internet-based show that gives the audience the chance to see what our nation’s elite military professionals can do and how a regular “Joe” or perhaps “citizen soldier” can rise up and meet extreme military training and expectations. 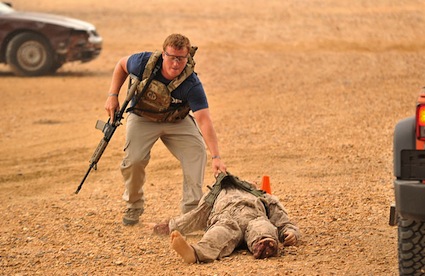 Maximum Warrior brings together 10 elite professional warriors from every facet of the special operations community with 10 regular civilians. Each one is put through a series of real-world military skills competitions ranging from combat pistol and rifle skills, soldier rescue, WADI patrol, an “O” course, IED ambush and combat-type driving tests with a jeep.

The first round of the competition put each individual’s skills to the test. The second round paired one of the “Joes” with one of the “Pros.” Mike Caudill, a civilian who voluntarily entered the competition, was paired up with USMC Recon SSgt. Louis Pope during the Team events and said, “The events were awesome and my main concern was not letting Louis down. I told him, ‘I’ll do whatever you tell me to do.’” According to SSgt. Pope, “Mike performed exceptionally and smoked the O-course.”

Each test was put together by former special operators on staff at the T1G facility in Arkansas, the home of the Maximum Warrior competition. T1G provides combat operators the latest weapons and tactics training, on-and off-road driving techniques and battlefield medical courses required to be ready for combat. 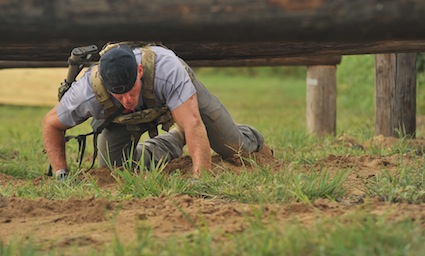 U.S. Army SSG. Cody Sieber, a combat medic attached to the 160th SOAR, said, “The facility was awesome. We had no idea what we were getting into and didn’t know the events ahead of time. The courses designed for the competition were very challenging.”

The military “pros” were each selected by their active duty SOCOM commanders and civilians were found via online volunteers. One of the Maximum Warrior trainers was Medal of Honor recipient USMC Sgt. Dakota Meyer, who was also a 2010 Maximum Warrior competitor.

For the shooting competitions, two of the weapons used were the Glock 17 9×19 and Remington AR-15, and each weapon was “stock” with nothing fancy attached.

USMC Recon SSgt. Louis Pope said, “The Glock was a great weapon, I really liked it and the Remington was excellent, but the iron sights took getting used to.”

Designed for professionals, the Glock 17 in 9×19 is the most widely used law enforcement pistol worldwide and the choice pistol for the Maximum Warrior competition. With its Gen4 Modular Back Strap design, allowing one to customize its grip to adapt to an individual shooter’s hand size, it was a perfect fit for 20 different competitors.

The Remington AR-15s had chrome-moly heavy barrels, Magpul MOE stocks and grips, Magpul Enhanced triggerguards, back-up iron sights and ambidextrous sling swivels. The competitors were all told by the T1G staff: If all the high-end sighting systems fail, you will be relying on your iron sights, and that is reality. 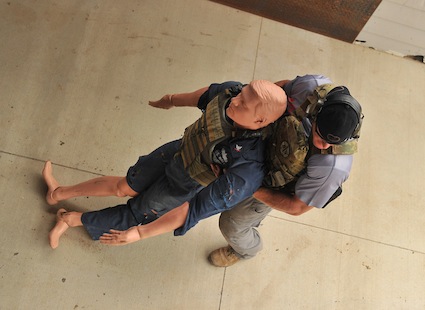 For SSG. Sieber and SSgt. Pope, the favorite event was the “Soldier Rescue,” in which they drove a jeep into a house, engaged hostiles, cleared the structure with both weapons and rescued the hostage. Both SSG. Sieber and SSG. Pope have many deployments to Iraq and Afghanistan under their belts and felt, although every event had a real-world application, that event seemed to be the most realistic and was the most fun.

The shining moment for Mike Caudill occurred while practicing with the rifle. Medal of Honor recipient Sgt. Dakota Meyer came over, tapped him on the shoulder and for an hour, helped Mike hone his shooting skills. Mike said, “That was the epitome of the competition—that despite all, these pros were humble, worked together and helped us meet their expectations. I have a new understanding of what they do and how good they are.” To find out who the 2011 Maximum Warrior is, go to maximumwarrior.com and watch the episodes.