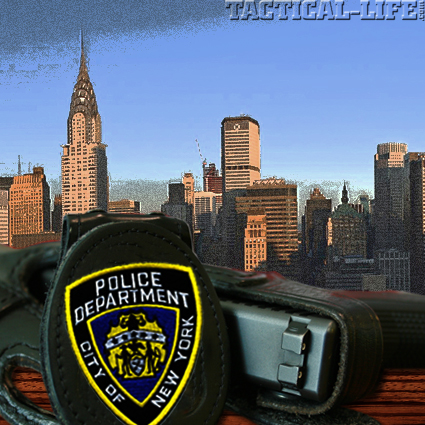 As the largest police department in the nation, The New York City Police Department has over 40,000 officers in its ranks. Some ranking systems call it the fourth largest army in the world, equipped with some of the best 9mm weapons on the market all using a 124 grain +P Speer Gold Dot Hollow Point.

According to the NYPD, Officers must buy their own gun. The NYPD allows three options, all with double-action only (DAO) trigger pulls and inherent safety features:

Glock 19: Reportedly over 25000 Officers choose the Glock 19 w/NY-1 or 2 triggers. Those trigger systems were created by GLOCK specifically for the transitioning of wheel gun carrying officers to convert to semi-automatic. The Glock 19 was found to be lighter, durable and accurate in 9mm.

Smith and Wesson 5946: A variant of the 5906 line, the stainless steel, full sized, double-action only weapon is chambered for 9 mm ammunition. Its safeties include a magazine disconnect feature, it cant be fire without the magazine in place, ambidextrous safety levers, a one piece rear wraparound grip, and a choice of either fixed sights, or the fully adjustable rear sight for both windage and elevation.

Sigarms P226 DAO: The highly respected handgun of many law enforcement and military organizations, the Sig 226 DAO (Double Action Only) has a black-anodized steel frame. The weapon incorporates a decoking lever on the left side of the frame above the magazine release button. By using the decoking lever, the hammer can be de-cocked without the firing pin moving, making accidentally discharges impossible. The decocking lever makes the weapon “drop safe,” which means the firing pin will be blocked from striking a loaded round unless the trigger is pulled. There is no manual safety to manipulate; the weapon has only internal safeties and has a steady 12lb NY2 trigger pull.

With over 13,000 sworn officers strong, the CPD comes in as the second largest department in the United States. Chicago Police officers must buy their own duty gear including uniform, handcuffs, light, baton and weapon. The annual uniform allowance is $1,800.

According to Chicago PD, in 2008 all new recruits were required to purchase a Glock 17 or Glock 19, which they may keep or switch after their probationary period. Depending on their hire date, officers have a variety of weapons they are authorized to carry including Smith and Wesson or Ruger revolvers in .38 Special.

Glock touts the 19 as the “all around talent weapon – that is ideal for versatile use through reduced dimensions compared with the standard pistol size. With the proven caliber of 9mm, it has found worldwide distribution in security services. In addition to being used as a conventional service weapon, it is suitable for concealed carry or as a backup weapon.”

After probation, the officer may purchase any weapon manufactured by Beretta, Glock, Ruger, Sig Sauer, Smith & Wesson, or Springfield Armory and can be chambered in either 9mm, .40 S&W, or .45 ACP. The weapons must also be Double-Action Only (DAO).

Always near the “tip of the spear” on the west coat, the LAPD has over 9,000 sworn officers and is arguably one of the front leaning law enforcement agencies.

According to LAPD, until 2002, the LAPD standard issue pistol was the Beretta 92F. When William Bratton was appointed Chief, he allowed officers to also carry the Glock. New officers graduating from the academy are issued the Glock 22 which is a .40 version of the Glock 17 but uses a modified slide, frame, and barrel to handle the size and power of the .40 cartridge. The Glock 22 has a standard magazine capacity of 15 rounds.

For LAPD SWAT, the original SWAT Teams, Kimber designed and designated the Custom TLE (Tactical Law Enforcement ) II also know as the LAPD SWAT Custom. This 1911 weapon has a .45 caliber punch, five inch barrel, steel made frame and slide with a lowered ejection port, custom trigger with a quick re-set, beveled magazine well, extended thumb safety, beavertail grip safety and internal firing pin safety. This feature provides additional assurance that the gun will not fire if dropped as it blocks the firing pin unless the grip safety is depressed and also comes with tritium bar-dot night sights. When LAPD SWAT hit the scene, they mean business.

As the largest city in Pennsylvania, Philadelphia PDs 7,000 sworn officers patrol some of the toughest streets in America. According to Philadelphia Police, they recently changed their gun policy. When a Philadelphia Police Recruit enters the Academy they are issued a GLOCK 21SF in 45 caliber. They keep this gun throughout their career.

Once on the street, an officer may also submit a memorandum requesting permission to carry a smaller weapon including a GLOCK 26 in 9mm; GLOCK 27 in 40 caliber or the GLOCK 30 in 45 caliber.

The officer would need to indicate the reason why they wanted to carry that weapon including an assignment to a specialized unit (Detective, Plain Clothes, etc.) where a smaller weapon might be appropriate.

The Officers who are permitted to carry the smaller handgun must purchase this weapon on their own, however, they are still required to maintain proficiency and qualify with each weapon they are authorized to carry.
For Philly SWAT, the GLOCK 35 in 40 caliber is the choice weapon. Only the SWAT Unit carries the 35 which is highly regarded in the law enforcement world. The GLOCK 35 is the 40 caliber version of the GLOCK 34 and gives these operators a weapon that will stop a threat on the spot. 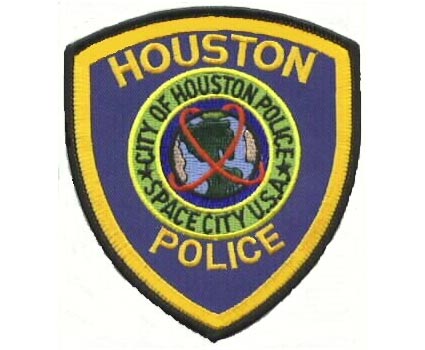 HPD has over 5400 police officers to cover a city whose crime rates reportedly rose significantly after Hurricane Katrina. HPD is the largest police department in Texas and allow its officers to carry one of an array of .40 caliber weapons. 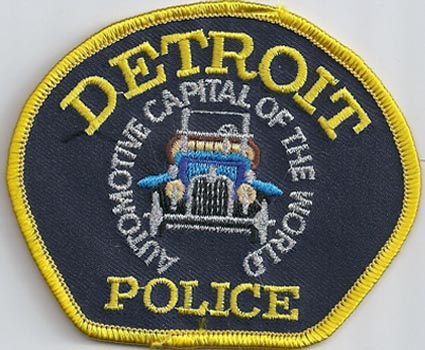 For its handgun, the M&P40 Polymer Pistols chambered in .40 S&W will be issued to each officer of the Detroit Police Department and will replace currently issued, non-Smith & Wesson firearms.

The Department has also placed an order for 350 M&P15 tactical rifles. The rifles will become available to officers upon the completion of a certification course. While reviewing new patrol rifles during the test and evaluation process, the Detroit Police Department compared the M&P15 against a broad range of competitive semi-automatic rifles. The M&P15 was acknowledged for the high quality of its components, the fact that it is produced in the United States, and that it is fully supported with training offered by Smith & Wesson.

Detroit Chief of Police, James R. Barren, Ph.D., said, “Converting our department to a completely new brand of firearms was a significant decision that required a great deal of evaluation by our officers. The Smith & Wesson M&P40 and the M&P15 merited a review, based upon their selection by a number of other law enforcement agencies recently. Both of these firearms were thoroughly tested and found to meet or exceed all of our requirements. The pistols allow each officer to customize the fit and feel of the sidearm and that translates into a safer and more efficient environment on the job. We were also impressed with the level of customer service that Smith & Wesson can deliver, along with the warranty that stands behind both the M&P40 pistols and the M&P15 tactical rifles.”

The Washington Metropolitan Police Department (MPD) covers the nation’s capital with a force of over 3400 strong. The department covers all of the non-federal areas in the District and is in the unique position of having a myriad of federal agencies that also patrol different areas of Washington.

In most situations, these federal agencies overlap jurisdiction with the Washington Metro police but MPD retains the majority of the jurisdiction, particularly over criminal investigations including homicides.

According to MPD Directives, Officers are issued either the Glock 17, 19 and 26 in 9mm. MPD’s Emergency Response Team (ERT) uses the SIG-Sauer P-226 9mm pistols. For rifles, the department issues the Colt AR15A3 Patrol Rifle.

Officers can also use the Remington 870 12-gauge shotguns and specialized units the Remington 700 .308 caliber Police sniper rifles, with Leopold 6.5 X 20 optics, .22 caliber rifles, 37mm gas guns, and various chemical and distraction/diversionary devices round out their tools.

Despite the overwhelming federal presence, the security of the nation’s capitol falls to the officers of MPD.

Nassau County, NY is bordered by Queens, NY on the west and Suffolk County, NY to the east. Entering Nassau County is what most New Yorker’s would generically consider as “Long Island.” Due to its location, it routinely overlaps and works with the NYPD and deals with many of the issues that spill over from the “Big City.”

Not to be outdone by its neighbor, Nassau County has also had its share of high profile cases such as Amy Fisher and Joey Buttafuoco and Colin Ferguson who shot and killed 19 people on a Long Island Railroad train in Nassau County.

Several township police departments dot the county but the Nassau County Police retain jurisdiction over the entire county with its 3,000+ officers. According to Nassau County PD, the duty weapon since 1989 was the Sig Sauer P226 9mm. More recently, the department announced that its is switching to the SIG P229 and SIG P226 in .40 S&W with the Double Action Kellerman (DAK) trigger and integral accessory rail as the new standard firearm(s).

Florida’s southern tip is home to the largest police department in the Southeastern US. The 3,000+ officers of the Miami-Dade County Police Department (MDPD), formerly known as the Metro-Dade Police Department, recently switched to Glock pistols.

According to OMB Guns.com, for the first time in history MDPD will purchase and provide duty Glock 9mm hand-guns to their officers.

Reportedly, MDPD also allows their officers the option of carrying from the below approved list of weapons. 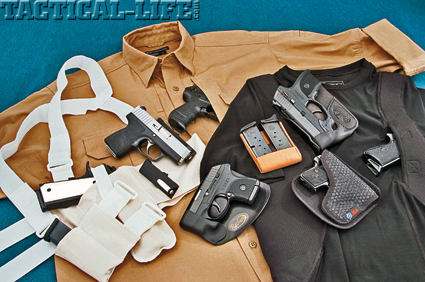