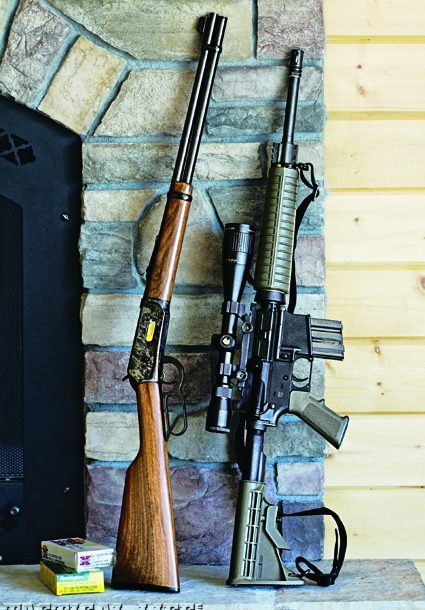 Since the Model 94 is no longer in production and the interest in AR-style rifles is on the rise, the Model 94’s reign as the premiere brush gun could be over. The author believes the AR is the rifle for the next generation.

In regards to rifles, I grew up in a transitional time period. I recall seeing Westerns on the big screen with heroes like John Wayne and later Sam Elliott toting Winchester Model 94s. The rifles were always handy, riding snugly in a weathered scabbard on a trusted saddle horse. When situations demanded the 94’s nimble frame allowed it to be pulled easily from the scabbard and put to good use instantaneously. The large capacity magazine and quick cycling of the Winchester created a formidable defense when called to action.

In reality the Model 94 also played a large role in my youth. When I was finally old enough to tag along on hunts for wily mountain whitetails the experience played out in South Dakota’s famous Black Hills. Despite my father not being a diehard hunter, he still followed tradition and purchased a gun to handle the mismanaged, dense timber of the “Hills.” My grandfather influenced his choice.

What was their rifle of choice? It was without question the time-tested Model 94. The short, light rifle equipped with open sights allowed any hunter to track the speedy escape of a whitetail in the overgrown ponderosa canopy. As an aspiring hunter, I longed to tote around a lever action to bag my first whitetail.

As much as I yearned to be a Winchester-toting cowboy, in blaze orange or a 10-gallon hat, I was also drawn to another rifle on the big screen. A few years later Vietnam war movies began filling theatres. It was in this real-time theatre of war that the M-16 automatic rifle saw its first indisputable test. In the beginning U.S. soldiers hated the new “plastic” rifle, but with care and upgrades soldiers began to embrace its simple qualities and rugged character. Rambo movies and Chuck Norris’ character in the Missing In Action flicks portrayed the firepower possible with an M-16 and an ample cache of magazines.
Short and nimble, the M-16 was at home in the dense jungles of Southeast Asia. In an instant it could be brought to the shoulder, aimed and engage the enemy during a close-range firefight, or precisely pick off guerrillas hidden across a muggy glade. It’s no wonder that this rifle has endured decades of deployment and its ancestors continue service to this day, more than eight million at last count.

Today there’s a huge change brewing in deer camps around the country. With the end of production for the Model 94 in 2006 and the rising interest in AR-style rifles, could the reign of the Model 94 as the premiere brush gun be over? I’ve got to believe it might be for the next generation. It might be impossible to persuade traditionalists, especially those of the baby boomer era, to put down their lever-action brush guns. But for Generation Y, an AR rifle has all the qualities to overcome point-blank shooting conditions. It’s short, sleek and available in a range of brush-busting calibers. Rail systems allow you to equip an AR with a variety of optics and accessories, and swap them out with a moment’s notice. An AR rifle might just be your next brush gun. 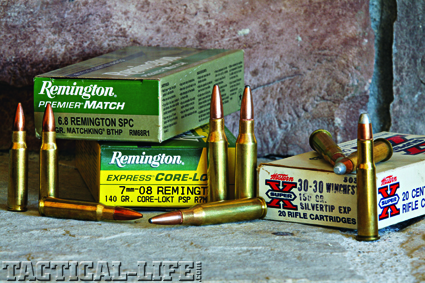 AR Versus Model 94
How does an AR stack up against a Model 94? It’s not apples to apples, but if you compare the two side by side you can see why an AR rifle could become the next great brush gun. First is size. The Model 94 and knockoffs then and now, weigh in at approximately 6.8 to seven pounds. It just missed the lightweight category of many hunting rifles with weights from five to six pounds. Referred to as “mountain rifles,” many versions are made with lightweight synthetics and weight-saving titanium. As a comparison, most bolt action rifles weigh from seven to eight pounds and more when you add riflescopes and accessories.

Depending on if you have an AR-15 or an AR-10, your rifle is going to weigh slightly less or approximately the same as a bolt action rifle. Remington’s R-25, available in three popular big game calibers, .243, .7mm-08 and the .308, weighs 8-¾ pounds. Armalite’s AR-10 comes in at 9.6 pounds so it’s obvious that ARs aren’t going to fall in the lightweight, mountain rifle category. They shouldn’t since they were also designed to be ergonomically comfortable, easy to bring to the shoulder and provide dependable firepower with accuracy.

That’s not to say you can’t strip an AR and give it a sleeker look and lighter weight. Collapsible stocks, composite forearms and light riflescopes can trim a pound or more from the AR’s overall weight. Finding these aftermarket products is as easy and typing “aftermarket AR accessories” into your Internet search engine.

If you look at length of the overall firearm the AR becomes a clear contender to deploy in tight conditions. Remember the proving grounds for the M-16 were the jungles of Vietnam. That’s as thick as you can get for a brush gun test and the quarry shot back to boot.

A short firearm is a necessity not only for quick deployment, but also to eliminate getting tangled up in tight fighting conditions like those in Iraq and Afghanistan. Many military rifles, particularly the M4 version, come equipped with collapsible stocks. Simply collapse or extend the stock to fit your needs at the moment. You can’t do that with a Model 94 unless your horse steps on your buttstock.

The original Model 94 has an overall length of 37.8 inches. It was easy to shoulder and move around in tight conditions such as a crowded Western barroom or in New York’s Adirondack Mountains while pursuing mountain whitetails. If you compare the lengths of popular models of ARs such as Smith & Wesson’s M&P15 OR (Optics Ready), Remington’s R-25 and the Armalite AR-10, you’ll see the range from 35 inches to nearly 41 inches in overall length. Most ARs are slightly longer than the average Model 94, but still shorter than most factory bolt actions whose overall lengths start at 41 inches and extend to 46 inches in some magnum calibers. Trying to quickly move a 46-inch rifle is a chore and probably better done under the power of adrenaline, such as the dose you might receive from the charge of a wounded Cape buffalo…if you can stand the heat. 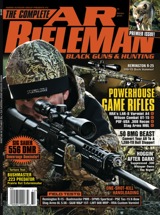 Like what you’re reading? Be sure to check out the premier issue of The Complete AR Rifleman.