In Tombstone Wyatt Earp worked briefly as a Well Fargo guard as well as serving as a deputy US Marshal. He was reputed to carry a Buntline Special like the EMF reproduction.

OF ALL THE LAWMEN OF the Old West, the one who garnered the most fame in the 20th century was Wyatt Earp. Bill Hickok was certainly more famous in his own lifetime, but Wyatt’s star rose along with the success of the film industry—due in part to Wyatt’s long life and his choice of the city in which he retired.

By the time Earp died in 1929 at the age of 81 in Los Angeles, movies were big business and getting bigger all the time. He was friends with early western stars like Tom Mix and director John Ford, who’s 1946 classic, My Darling Clementine was considered the best of the Earp movies until the 1990s (provided you aren’t looking for any degree of historical accuracy). Since 1932 there have been at least 10 movies filmed where Wyatt Earp was the central character and about 20 others where Earp is at least tangential to the story.

The string of Earp movies culminated in the early 1990s with Kurt Russell playing Wyatt in Tombstone and Kevin Costner playing the lawman in Wyatt Earp. Costner threw everything into his film but the kitchen sink. I liked it, but I remember remarking to a friend, “You know there’s a great two-hour movie inside Costner’s Wyatt Earp, he just needs some good editing to get out.” My friend replied, “Mike, I agree with you—that movie is named Tombstone.”

He’s probably right. Tombstone had a huge effect on the Cowboy Action Shooting fraternity. It came out just as the sport was experiencing a phase of phenomenal growth, and its accurate period garb and gear affected the choices of quite a few cowboy shooters. It is one of my favorite movies.

But if you are a child of the 1950s and ‘60s, your mental image of Wyatt Earp was probably formed not by movies but by the weekly TV series starring Hugh O’Brian, called The Life and Legend of Wyatt Earp. That show hit the airwaves in 1955, ran until 1961 and was the first of the adult westerns, paving the way for shows like Gunsmoke and Bonanza. The series started when I was only a year old, so I was too young to remember much about it. But a couple of years ago I met Hugh O’Brian and he remarked that I ought to write an article on Wyatt Earp’s Buntline Special. 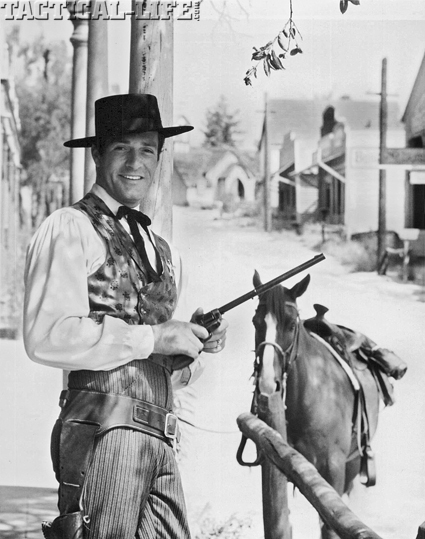 Hugh O’Brian played Wyatt Earp for six years in what has been called the first adult television western. His show paved the way for a generation of Westerns on TV. Everyone in my generation owes Hugh a debt of gratitude for that.

That piqued my interest enough that I bought the DVD box set of The Life and Legend of Wyatt Earp and saw what I’d missed back in the 1950s. The program still holds up well today, unique in that it
made a real attempt to chronologically present Earp’s life as a lawman. Epi-sodes were based around the events Stuart Lake wrote about in his Earp biography Wyatt Earp: Frontier Marshal, with Lake even serving as a technical advisor on the show. While a great deal of Lake’s book has been discredited by modern historical scholarship, he did know Earp personally, which must have provided the series with valuable insights into Earp’s character.

Watching the series I became a Hugh O’Brian fan and, as it turned out, when we showed up at last year’s Single Action Shooting Society (SASS) convention, we found ourselves next door neighbors to O’Brian’s booth. Hugh and his lovely wife Virginia were there signing autographs and we got to know the O’Brian’s better during the convention.

After watching the TV series and spending time with the star, I was pumped to write about the gun most closely associated with Wyatt Earp — The Buntline Special. A short walk across the convention floor brought me to EMF’s booth, where I arranged a loan of one of their Buntlines. This is a long-barreled Colt SAA clone modeled after the custom-made revolvers supposedly presented to a group of famous Dodge City peace officers in 1876 by the prolific novelist Edward Judson, who wrote under the pen name Ned Buntline. Buntline was rewarding the men for providing him with colorful fodder for his novels. 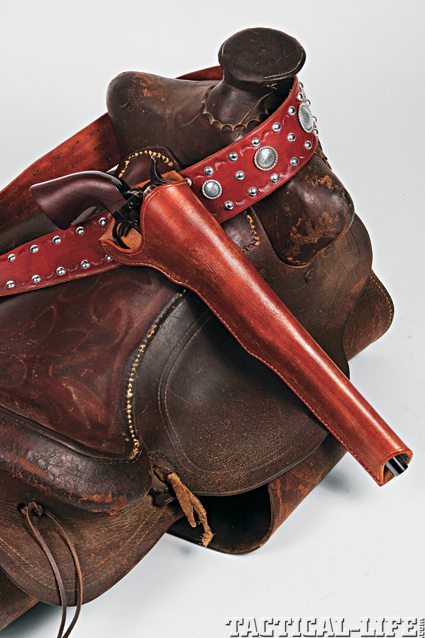 Author doubts that Earp could have comfortably drawn a 12” barreled Buntline from a typical 19th century strong side holster. But thinks it is much more likely that Earp actually used a crossdraw rig like this example from Circle Bar-T LeatherWorks.

It’s a good story, but it rests entirely on Stuart Lake’s book as the source of the information. Unfortunately Lake’s story is more full of holes than Swiss cheese. Modern historians have discredited a great deal of Lake’s book, including the chronology and the rationale surrounding Buntline’s presentation of the pistols.

But even Allen Barra and Casey Tefertiller, two of the most recent Earp biographers, don’t entirely discount the long-barreled Colt’s existence. There is too much circumstantial evidence to dismiss the existence of the Buntline Special out of hand. What is interesting is that while Lake describes the revolver as having a 12-inch barrel in his book, his working notes said it had a 10-inch barrel. Many experts today think the 10-inch barrel length is more likely to be the correct one.

Regardless of the truth, the legend has Earp armed with a 12-inch barreled Colt, and that’s what Hugh O’Brian carried for the 6 years he portrayed the frontier marshal on the series. Therefore, 12 inches is the barrel length on the EMF Buntline Special we tested. 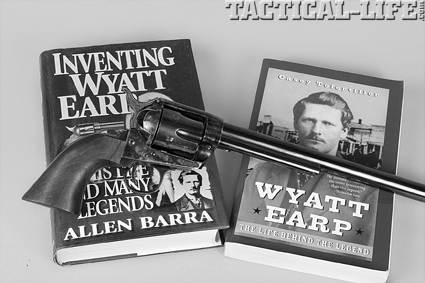 Despite the lack of hard evidence, modern Earp researchers Like Casey Tefertiller and Alan Barra, think there is too much circumstantial evidence to dismiss the existence of the Buntline Special.

Gun Details
EMF’s Buntline Special is part of its Great West-ern II product line. These pistols are built in Italy by Pietta, and are by far the best reproduction of a second generation Colt to leave the shores of Europe. I have been a fan of Great Western II revolvers since they were first introduced, and I have a couple of examples in my personal collection. The Buntline Special lives up to the Great Western II’s reputation for quality. The color casehardening on most Italian sixguns consists of a few swaths of washed out color on a mostly gray receiver. Not so with EMF’s Buntline, which shows Pietta has gone the extra mile. The results are gorgeous deep blue swirls that seem to float on a Smokey amber background. The rest of the pistol’s steel is finished in a lustrous modern black oxide bluing over well-polished metal.

The EMF Buntline is offered in two grip options, walnut or faux stag. The walnut grips are excellent with a deep brown color with an understated oil finish and the wood to metal fit is almost perfect. When he played Wyatt Earp, Hugh O’Brian’s Buntline had walnut grips like these, so I was remaining true to the icon.
My choice of gun leather is where I parted company with The Life and Legend of Wyatt Earp. In the series O’Brian wore his Buntline in a typical Hollywood buscadero rig with an extended drop loop that positioned the grips at mid-thigh on his leg. As a result, the 12-inch barrel extended well below his knee. If they had positioned the rawhide tie-down thongs at the bottom of the holster, O’Brian wouldn’t have been able to bend his knee. So on his rig the tie-downs were attached to the center of the holster. The buntline holster had to ride low so that O’Brian could execute the required 1950’s fast draw despite the 12-inch barrel of the Buntline.

Lucky for me, no one times my draw. So I felt free to break with Hugh on this one. Stuart Lake has Earp say in Frontier Marshal, “[The Buntline] was my favorite over any other gun. I could jerk it as fast as I could my old one and I carried it at my right hip throughout my career as marshal.’” 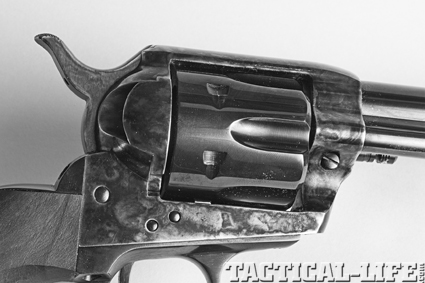 The Great Western II Buntline features spectacular custom color casehardening that puts it in a class apart from most Italian imports.

Somebody, either Earp or Lake, was lying. If the real Wyatt Earp actually carried a Buntline, I’d bet dollars to doughnuts that he carried it in a crossdraw rig. Drop loop holsters were almost non-existent in the 1870s. And if Earp was going to jerk that long-barreled revolver from a typical 1870 to 1880s strong side holster, he was not going to be quick about it. My shirts have 33-inch sleeves, and from a typical strong side holster belted just below my waist, I can only clear leather with the Buntline through uncomfortable effort. There is nothing fast about it. 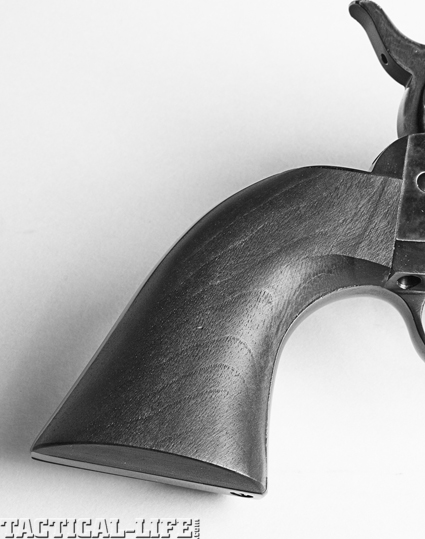 The walnut grips on the Buntline are a nice deep wood tone without the reddish stain found on so many Italian SAA clones.

On the other hand, with a crossdraw rig all barrel lengths draw more or less equally fast. Your arm has to come all the way back across your body anyway — it doesn’t matter if it drags two inches of barrel or 12 inches of barrel. My Buntline rig was made by Marty Overstreet at Circle Bar-T Leatherworks. It is an open-toed Slim Jim with a long, shallow S-curve mouth, canting 15 degrees backward for a very comfortable draw. Believe me, when you strap on that rig at the range, people take notice.

Shooting Impressions
The Buntline does more than draw stares — it shoots like a house afire. It is surprisingly well balanced, so much so that I found myself shooting one-handed most of the time. This revolver’s balance was complimented by its exceptionally smooth, light action. The trigger pull is an outstanding two and a half pounds. This all adds up to a pistol that shoots as well as it looks. With Black Hills .45 Colt ammunition the Buntline shot 25-yard, off-hand groups that ranged from one and a half inches to three inches in diameter.

When I switched to my black powder handloads, it opened up a bit to average out at 3 inches. But at 956.66 fps (feet per second) in velocity, the black powder loads were moving about 200 fps faster than the factory loads. When you are moving 255 grains of lead down range at that speed you are generating a fair amount of recoil, but the Buntline has enough steel out in front to make muzzle flip controllable. Overall the Buntline was a pleasure to shoot, and shooting it is a fitting tribute to Hugh O’Brian. ✪ 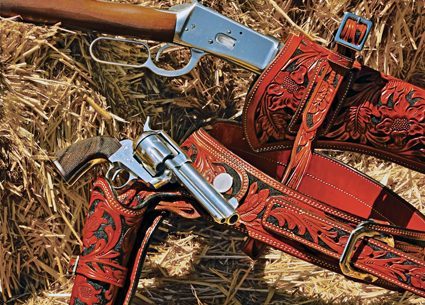