0
SHARES
4
VIEWS
Share on FacebookShare on Twitter
Whether hitting the multiplex theater near you or gracing the screen of the television in your home, this was another banner year for GLOCK pistols on the screen. Seen in movies and on television, several major Hollywood productions elevated the GLOCK to featured-player status.

Why So Serious?
The Dark Knight, the latest big screen adventure of the comic book hero Batman, was the most successful action film of all time, grossing over one billion dollars! While many credit the film’s success to the posthumously awarded Oscar-winning performance of actor Heath Ledger, I personally believe no small part was played by the GLOCK autopistol. The Dark Knight’s Joker starts his Gotham City crime spree with a select-fire 9×19 GLOCK 18 pistol in his hand, and stays with various-sized GLOCK pistols throughout the film.

From the sublime to the ridiculous, the Jason Statham-starring Transporter 2 featured Lola, an underwear-wearing assassin played by Kate Nauta, who hits the streets of Miami wearing a pair of laser-sighted, silenced GLOCK 18s (and not much else).

On the other side of the world, movie star and adolescent girl-heartthrob Leonardo DiCaprio takes to the bush with a pint-sized GLOCK 26 in the African action thriller Blood Diamond, later carrying a GLOCK 19 as CIA analyst Roger Ferrus in director Ridley Scott’s (of Gladiator fame) Body of Lies.

If you’re looking for a real American hero, the summer blockbuster G.I. JOE: The Rise of Cobra brings the 1980s childhood toy line to the big screen. An all-star cast including Dennis Quaid, Marlon Wayans and Sienna Miller were trained by Los Angeles weapons experts in the proper use of GLOCK pistols and assorted assault rifles. They use that training to good effect when they take the battle between good and evil across the globe with a multitude of weapons including highly modified GLOCK pistols. 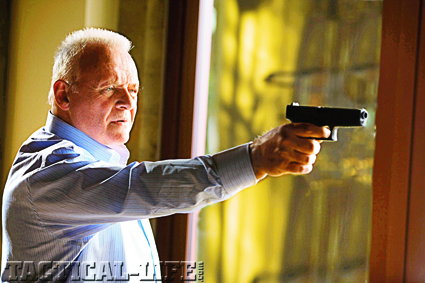 Reflecting the reality of the GLOCK’s dominance in the law enforcement community, Bruce Willis has a GLOCK 21 in Hostage, as well as a backup GLOCK 26, while the SWAT team members in the film use GLOCK 35s. Ray Liotta’s Detective Harrison in the Seth Rogen mall security comedy Observe and Report also sports a GLOCK. Across the Pacific, Nicolas Cage tries to survive the remake of the Asian crime classic Bangkok Dangerous with a GLOCK in his sweaty palm.

One of my personal favorites in heavy rotation on the cable movie channels is the legal thriller Fracture. In the film, Silence of the Lambs star Anthony Hopkins takes another Hannibal Lector-type turn as a mad genius obsessed with perfection who shoots his unfaithful wife. The key to his defense is that the GLOCK 21 .45 Auto pistol recovered at the crime scene has never fired a shot. The hapless prosecutor, played by Ryan Gosling, and an army of forensics men play out scenes with the GLOCK pistols that figure in the case. In fact, the GLOCK 21s used by both Anthony Hopkins and the detective played by Billy Burke get so many loving close-ups that they should have received screen credit as characters in my opinion. 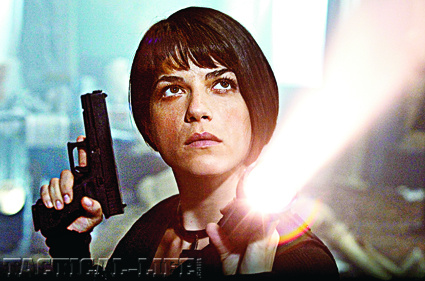 But the squad from Hellboy’s BPRD aren’t the only monster-fighting movie heroes turning to GLOCK. Melissa George fights ravenous blood suckers in the Alaskan vampire film 30 Days of Night. A GLOCK 36 is in the hands of Nick Stahl as John Connor takes on the Cyborgs in Terminator 3: Rise of the Machines. Stahl’s character grows up to be the John Connor character in Terminator: Salvation played by Christian Bale.

The zombie-battling survivors of Resident Evil: Extinction make their way through the post-apocalyptic wastelands of Las Vegas, NV., under the firm protection of Gaston Glock’s polymer-framed gun. When the Umbrella Corporation unleashes the mutant dogs and living corpses made popular in the two previous movies based on the Capcom video game, they are met with jacketed lead from the GLOCK.

Breaking Bad on the Small Screen
This year the GLOCK is again the weapon of choice for small-screen crimefighters such as Reiko Aylesworth on the show 24. The Show’s star, Kiefer Sutherland, used a GLOCK 19 in the two-hour special event movie 24: Redemption. They tried to resurrect the Bionic Woman last year on television, and a .45 Auto subcompact GLOCK 30 was along for the slow-motion run.

F.B.I. agent David Sinclair played by Allimi Ballard totes a GLOCK 23 in the CBS show Numb3rs. The combined lab men and women from CSI, CSI: Miami and CSI: New York take on their seemingly unsolvable crimes with GLOCK models ranging from subcompact .40 GLOCK 27s to full size GLOCK 17 9x19s at their side.

While all the CSIs, including CSI: New York, are actually filmed in Los Angeles, the detectives of the New York-based shows Law & Order, Law & Order: SVU and Law and Order: Criminal Intent film their gritty dramas on location in the Big Apple. Because of New York’s arcane firearms laws requiring “non-guns” in filming, these television good guys must carry GLOCK 19s that have been modified to not be capable of firing live ammunition. What a waste of good GLOCKs!

With more and more GLOCKs like the new G21 SF being adopted by law enforcement and specialized military units every day, you can be sure you’ll see plenty more GLOCKS on the big and small screen.