Commentary: Why The Revolver Won’t Go Away

by Chuck Taylor
in Exclusives
0

Back in 1985 as the self-loading pistol began to supplant the revolver as a law-enforcement weapon, most writers and shooters alike opined that the wheelgun’s days were over. “It’s too fragile,” they claimed, “and it lacks firepower and is too difficult to use well under stress.” were the most commonly heard criticisms and they were loud indeed.

The claim that the revolver is excessively fragile could only have been based upon a theoretical comparison with the self-loading pistol or a blatant assumption because a hundred-plus years of historic fact contradicts it. In all the decades the DA revolver was the lawman’s best friend, no one ever complained that it was fragile or unreliable; quite the opposite. 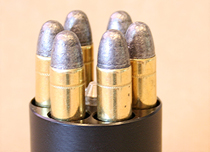 I remember an instance back in the 1980s, when I tested all the so-called “modern” self-loaders against the DA revolver. It was 40-degrees below zero and nearly all of the self-loaders failed in one way or another. Yet, to my astonishment, the DA revolver I was using as a control gun (a S&W M27 .357 magnum) made it through the entire 750-rd. test without a single failure! Only the Colt M1911 and Browning P-35 and the Glock duplicated this feat (the Springfield Armory XD series did not yet exist). All the other self-loaders, though a legitimate array of the most commonly used designs, failed.

The test was a tough one, too. The shooter would fire the weapon as fast as possible until it was empty, reload it, drop it into the snow and walk away for 20-minutes. Then he would return, pick it up, shake it off and attempt to fire it. During the 20-minute interlude, any condensation created as the hot weapon cooled turned into ice. Yet, the revolver blew right through the test without a single hiccup.

When I mentioned the event to a couple of buddies who were Alaska State Troopers (who at the time carried S&W M686 .357 magnums), they laughed and said that their outfit had discovered the same thing.

Excessively fragile?
The switch in the police community from DA revolver to self-loader wasn’t based upon a lack of the revolver’s mechanical reliability, it was based upon the assumption that because it possessed larger ammo capacity, the self-loader would improve officer’s hit percentages, which at the time, hovered around 17%. And typically, the civilian self-oriented shooters followed suit like they always have and made the switch, too. After all, if the cops use it, it must be better, right?

However, in the two decades since, police hit percentages haven’t increased; in fact, they’ve declined. The reason for this is easy to see – too many officers believed that larger ammunition capacity is a valid substitute for marksmanship, a premise that was quickly disproven. Thus, the notion of the self-loader’s increased “firepower” has proven to be totally false.

Almost daily, we read, hear and see instances where self-loaders with large-capacity magazines failed to enhance officer performance under stress. Stories of confrontations in which officers fire virtually their entire basis load of ammo (typically in excess of 30 rounds) and only manage to hit their target – somewhere – a few times.

When we remember that all those misses had to have gone someplace, it becomes glaringly apparent that larger ammo capacity didn’t solve the problem, which was that the shooters were missing too much. And it doesn’t take a genius to see that all those misses increase the danger to the surrounding community.

My comments are not intended to impugn the police, only to highlight that fallacy that because it holds less ammunition, the revolver is somehow less efficient that the big-magazine self-loader. Hits, not shots fired, win gunfights and misses not only increase the participant’s tactical liability, but their criminal and civil liability as well.

The fact is that the police are no better off today with their self-loaders than they were with DA revolvers, because marksmanship – not ammo capacity – is, and always has been, the determining factor in shootouts.

And this brings us to criticism #3 – that in comparison to the self-loader, the revolver is too hard to use under stress. If such a comparison were limited to cocked & locked single-action autos like the M1911 or Browning P-35, the claim is true. However, neither one of these guns is used to any significant degree by the police.

Instead, either a classic DA or DAO design is the norm. And a classic DA (wherein the gun fires the first shot via trigger cocking and then reverts to the single-action mode) is MORE difficult to use under stress than a DA revolver because it requires two different methods of trigger manipulation.

The DAO (double-action only) self-loader, which utilizes exactly the same operational methodology as the DA revolver, is rapidly replacing the classic DA auto (about 75% of the police departments in the U.S. use the Glock, which is a DAO design) because it’s easier to shoot well under stress. So how can it legitimately be claimed that the auto is easier to shoot under stress, when as far as trigger operation is concerned, the dominant self-loader design operates in exactly the same way as a revolver? Obviously, such claimed are completely fallacious.

In my own experience, I offer the ASAA Handgun Combat Master Qualification Test as additional proof. Thus far, I’ve passed it eight times, once with a heavy-barreled 4-inch Smith & Wesson round-butt Model 10 .38 SPL. Out of a score of 400 possible points, I shot a 394 (99%). Yet, though I squeaked through it once by one point (360, or 90%, is the minimum passing score) using a super-tuned S&W M-39 9mm, no one else has thus far even come close to passing it with a DA auto. Glocks, (a DAO design) yes, but not a single classic DA self-loader. 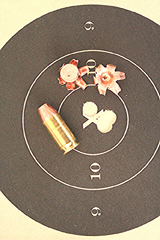 The revolver won’t go away because it’s as efficient today as it ever was, and that’s obviously efficient enough! With even margin care, it’s as mechanically reliable as any machine can be, has ample ammunition capacity if the shooter is a halfway decent marksman, and is no more or less difficult to operate under stress than any other handgun.

Another reason for the revolver’s continued popularity is that it can utilize nearly any kind of ammunition and bullet design, whereas self-loaders cannot. This makes it more versatile and thus efficient in a wider variety of use categories. Wad-cutters and semi-wadcutters, for example, don’t feed very well in most self-loaders, but revolvers gobble them up without a hiccup.

Obsolete? Hardly!
So then, the revolver won’t go away because it remains a highly versatile, user-friendly weapon, capable of delivering the highest levels of performance. It’s accurate, reliable, quite user-friendly and can be obtained in a configuration suitable for nearly any purpose.

As such, it should be no surprise that it continues to be popular. It’s been going strong for over a hundred years and no doubt will continue to do so for the foreseeable future. I, for one, intend to keep right on using mine!