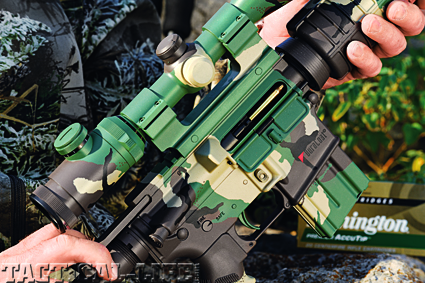 Lauer’s huge selection of camouflage patterns puts Baskin-Robbins to shame. The British DPM (Disruptive Pattern Material) pattern worn by this once-black rifle is set to fool the eyes of a wary coyote coming to calls.

It was nearly a century ago that Henry Ford said of his first Model T, “You can have it in any color you want, as long as it’s black!” It was about the same with firearms. Once finished in bright silvery steel, guns began to be finished in deep blue/black around the middle of the 19th century, a practice that continued when I was growing up in the mid-20th century. Sure, if one could afford it, he or she could buy a gun with shiny nickel, silver or even gold plating, but most had to settle for blue with perhaps some parts color casehardened.

Well, it didn’t take long for Ford to see the light and offer his cars in other colors, many of which did not become so hot when the car was parked in the sun. And today you can get a Ford and other vehicles in virtually any color you want. Firearms are now catching up. As I recall, it began with Hi Standard back in the 1960s when that company offered several of its revolvers with their alloy frames anodized in colors such as blue, red and maybe green. The “target” at which this marketing technique was aimed was women who wanted a personal protection revolver in something other than basic black. 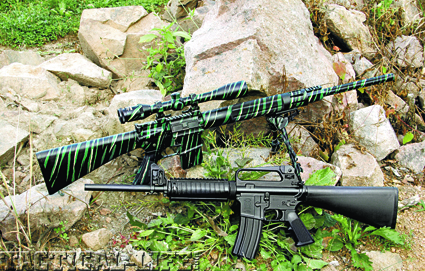 Matching the U.S. Air Force camouflage uniform to perfection, DuraCoat’s ABU finish would be far better on its “black rifle.”

One of the most beautiful camouflage patterns DuraCoat offers is the CAD-PAT. It would also seem to go well with a Multi-Cam uniform or all by itself. 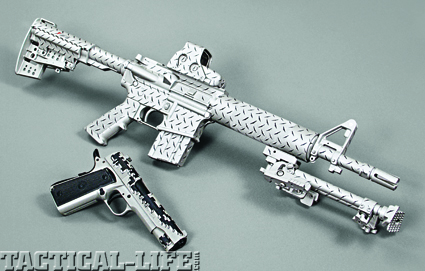 Not meant to blend in with anything, except silver diamond plate, this pattern is a real attention getter no matter where it is.

The Call For Camouflage
Available in a seemingly endless array of colors from pastels to bright rainbow hues, DuraCoat can also be custom mixed to any shade desired. What’s more, it can be had in containers from conventional spray cans to 55-gallon drums. What about multi-colors? Ah, that’s a whole new ball game.

With almost as many overlay patterns as colors, DuraCoat can easily be applied in the camouflage of your choice, including all highly recognized patterns, as well as unique brightly colored ones, all of which are true works of art. By following simple instructions, it’s hard to make a mistake, but for real professional results; DuraCoat offers an affordable, hands-on one-week course held at the Lauer Custom Weapons facility. Designed especially for DuraCoat dealers, many will find this art form fascinating and fun. It is also profitable.

For example, DuraCoat can be rendered in the U.S. Army’s current digital ACU pattern, as well as Air Force and USMC digital patterns. We can expect to soon see the U.S. Navy’s new blue/gray digital camo pattern to be added. Not only have these DuraCoat camo patterns been applied to firearms, but also other pieces of equipment to match the uniform. Imagine a helmet in digital camouflage to perfectly match the uniform, or a scope to match the camo pattern on a rifle.

Not everyone loves firearms of color. Take New York’s Mayor Bloomberg for example, who has launched a crusade against them in “his” city. His Honor calls colored guns “deceptive” and apparently believes that all guns should be colored either black or silver, but that’s not the half of it. The good mayor has had yet another anti-gun law passed, this one making possession of such firearms illegal in New York City even though the NYPD reports that there has never been an incident involving a gun of color. Not satisfied with his New York City law, Bloomberg has continued to push for Long Island to pass the same legislation, but Long Island has a long tradition of waterfowl hunting clubs, and a large segment of hunters. What does this have to do with colored guns? Besides being resistant to any anti-gun laws, a great many of the folks on Long Island have shotguns that came from the factory with camouflage finishes.

Perhaps Mayor Bloomberg isn’t such a bad guy after all, as he does allow certain DuraCoat bright “rainbow” colors to be possessed and used in New York City. As a tongue-in-cheek tribute to the mayor, Lauer Custom Weaponry has designed an elaborate camouflage pattern using only those colors allowed in New York City. As they say, a picture is worth a thousand words, and the accompanying photograph of the “Bloomberg” AR-15 is no exception.

In case you missed Rifle Gear’s blog entry on their Hello Kitty AR painted by Armory Airbrush, here’s a taste of what they had to say: 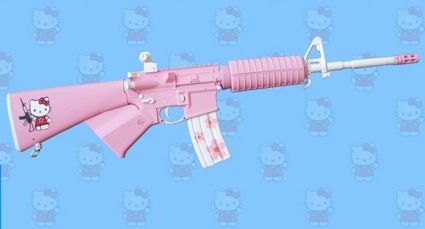 So called “Assault Weapons Bans” such as the now expired 1994 Clinton ban and the one still in place in states such as California seek to ban rifles that our misguided legislators feel have no purpose in civilian hands. They identify “evil features” they can use to generically classify these “military style” weapons in sweeping terms. Of course these features, such as plastic pistol grips, barrel shrouds, and bayonet lugs have absolutely nothing to do with the firearms potential lethality in the real world and are merely cosmetic features. After all, it really doesn’t matter what color the firearm is if it fires the same ammunition right? Well, in the “spirit” of the California Assault Weapon Ban I decided to do my best to alleviate the fears of my fellow citizens and gun-banning legislators when I put together a new AR-15 for my wife. Below is the result of my painstaking work to transform an Evil Black Rifle (EBR) into a Cute Pink RIfle (CPR). Introducing the Hello Kitty AR-15! 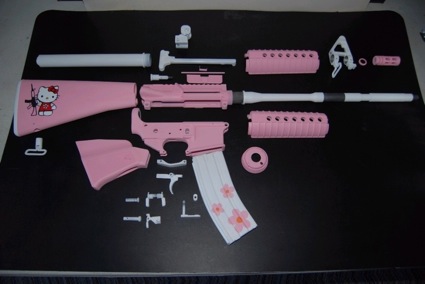 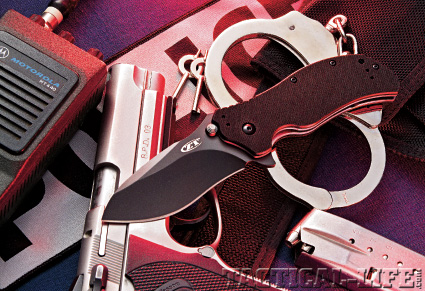 Zero Tolerance shrinks its 0300 knife down to EDC size and creates a not-to-be-messed-with...