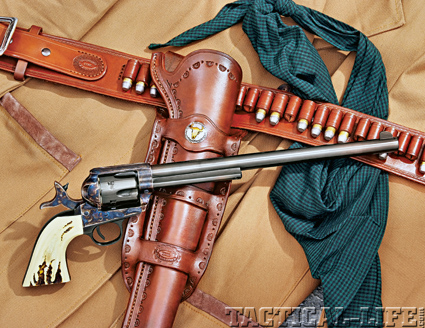 MANY WESTERN GUNS HAVE BECOME FAMOUS because of their equally famous or infamous owners, but few 19th century handguns have become famous solely by virtue of their existence. The most notable example appeared in the year of our nation’s Centennial Celebration in 1876. That spring, Philadelphia was astir with the excitement of anticipation as a whole nation well prepared by months of publicity, awaited the May 10th opening of the International Exposition at Fairmont Park in Philadelphia. As thousands of Americans waited to enter the grounds, they could see the vast Main Exhibition Building. Beyond were the towers and expanse of Machinery Hall, the Gothic “barns” of Agricultural Hall, the arabesque architectural intricacies of Horticultural Hall, the art galleries of Memorial Hall, and 24 state and many other buildings covering 236 acres of exhibits and exhibition grounds. The Colt’s Firearms Manufacturing Company prepared a massive display cabinet featuring 18 specially engraved Single Action Army models arranged in a central pinwheel. Among other new
models displayed in the great cabinet was a very special Single Action Army fitted with an exceptionally long barrel. It represented one of several changes made to the SAA during the 1870s. The model has come to be known as the “Buntline Special”.

Among Colt models, the Buntline is a unique, limited edition revolver with its own history and more than a few tales that have become intertwined with the folklore of the American West. It is named after dime novelist Ned Buntline, a pseudonym for newspaperman and playwright Edward Zane Carroll Judson. Buntline, incidentally, is a nautical term for a rope at the bottom of a square sail. Judson had served as a midshipman and thought the name was catchy. Apparently he was right.

As a newspaper columnist and dime novelist Ned Buntline helped create Buffalo Bill Cody’s reputation through books and short stories. He even wrote and co-starred in the first play in which famed US cavalry scouts Texas Jack Omohundro and Buffalo Bill Cody appeared in March 1872.

Despite the renown, infamous or otherwise of his 400 odd dime novels, Ned Buntline is best remembered for the celebrity he brought Colt’s special 16-inch SAA models. These unusual, long-barrel Colts with flat top straps, folding leaf rear sights, and detachable skeleton shoulder stocks, were purportedly presented by Buntline as gifts to some of the more famous members of the Dodge City Peace Commission, including Wyatt Earp, Charlie Bassett, Bat Masterson, and Bill Tilghman. 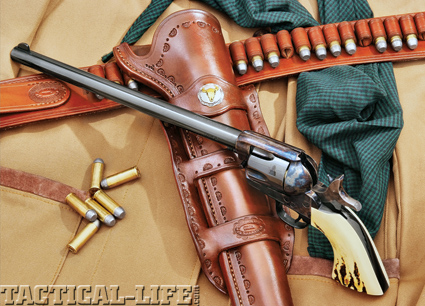 The finish on the GWII Buntline is a highly polished bright dark blue, contrasted by a deep color casehardened frame and hammer, and polished dark blue screws. The backstrap and triggerguard are also finished in a high polish dark blue. Adding the Ultra Stag grips sets everything off handsomely. 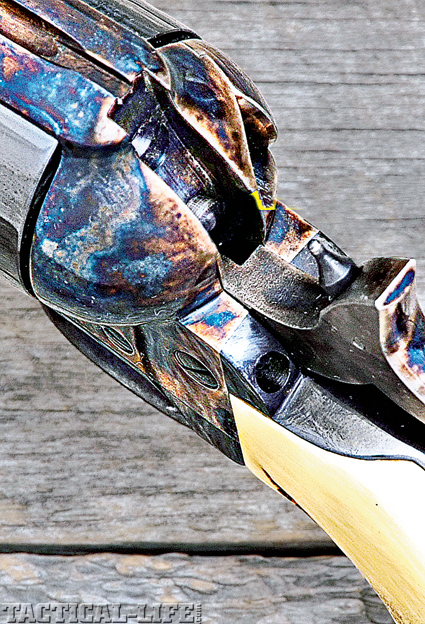 Pietta uses the cylinder arbor and a double notched transverse latch to create a safety mechanism. By depressing the latch and pushing the cylinder arbor further back, the rounded end protrudes through the face of the recoil shield and blocks the hammer from fully dropping into battery.

None of them, however, are known to have carried one of these 16-inch models. In fact, there is no actual record that such presentations were ever made. Wyatt Earp did, however, own a Colt SAA model with a 10-inch barrel and it was this recorded fact that inspired the 10-inch barreled Colt SAA carried by Kurt Russell in the film Tombstone, complete with an engraved silver grip cartouche reading: Wyatt Earp Peacemaker From the Grateful People of Dodge City April 8th 1878. That part, unfortunately, was made up for the film. The real Wyatt Earp nevertheless noted in his biography that he had owned such a gun.

That the “Buntline Specials” existed has never been disputed. The question is who owned them and what, if any connection Ned Buntline actually had to them. It would seem logical, at least from an historical perspective, that if Buntline had made gifts of these guns to famous lawmen, he would have presented the first to the man whose real life deeds gave him the fodder for his earliest dime novels, Buffalo Bill Cody. But even Buntline never made such a claim. Colt’s factory records indicate a total of 18 long barreled models being built in the serial number range 28800 through 28830 beginning in 1876. Colt’s also produced SAA models with 10-inch barrels, such as the one owned by Earp, as well as revolvers fitted with 12-inch barrels. As for the so-called “Buntline Specials,” Colt’s more or less officially recognized them as such in the mid-20th century when they began building them by that name in 1957 as part of the 2nd Generation Colt SAA line. Since 1976 they have also been available within the 3rd Generation series of SAA models. For more than a century the Buntline Special has remained a legendary gun, even if the legend isn’t true. As they said in The Man Who Shot Liberty Valance, “This is the West, sir. When the legend becomes fact, print the legend.”

The earliest Buntline copies produced outside of Colt’s were first manufactured by the Great Western Arms Company of Los Angeles, California during the 1950s, when, at the time, it appeared that the Colt’s Manufacturing Co. had discontinued the SAA. Actual production ended in 1940 but Colt’s manufactured a limited number of guns from remaining parts shortly after World War II. The first Great Western SAA models appeared in 1954, and remained in production for almost a decade. In 1956 Colt’s reintroduced the SAA as the 2nd Generation model. During the 10 years that Great Western produced guns the “Frontier Six Shooter” was offered with a 12-inch barrel and faux stag grips. Fast-forward 45 years, and the EMF Great Western II returns as a Buntline with stag grips. The optional Ultra Stag grips add a whopping $225 to the $575 base price of the Buntline. As for looks, you get every penny’s worth out of the stag grips. 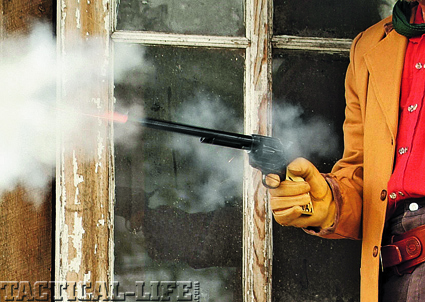 The Buntline model was introduced in early 2009 and is already available through EMF and retailers. While A. Uberti has been offering Buntline models for almost a decade (with 18-inch barrels and the Wyatt Earp model sold by Cimarron with 10-inch barrel), the EMF GWII is built by F.LLI Pietta, and is that firm’s first Buntline model. It is also the first since the original Great Western single-actions of the 1950s to have a 12-inch barrel.

The new Pietta six shooters have a finely tuned action right out of the box. Our production test sample had a glass smooth four click hammer pull requiring just 4.9 pounds of effort, and a trigger that crisply dropped the hammer at 2.3 pounds with less than 1/16th of an inch of creep.

The finish on the GWII Buntline is a highly polished bright dark blue, contrasted by a deep color casehardened frame and hammer, and polished dark blue screws. The backstrap and triggerguard are also finished in a high polish dark blue. Adding the Ultra Stag grips sets everything off handsomely.

As anyone who has tried knows, there is no easy way to holster a Buntline. For our test gun Alan and Donna Soellner of Chisholm’s Trail Leather came up with a combination design based on the Major John Barden holster and L. P. Hatch drop loop style of Pinedale, Wyoming. The Chisholm’s Trail rig has a slight forward cant for a right hand crossdraw. The well-exposed triggerguard allows for a much faster draw than one would expect from a holster filled with a 12-inch barrel. The leather is 9-10 gauge movie grade finished in multi-toned shades of brown to match a cartridge belt copied from the one famously worn by Billy the Kid. The Buntline holster is accented with an Indian-made, scalloped edge silver Concho featuring a gold-plated buffalo skull at its center. 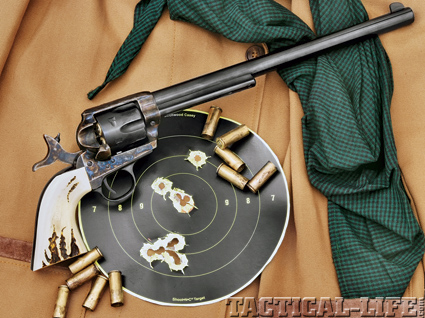 We did two range tests of the EMF GWII Buntline, one with .45 Long Colt blanks, specially prepared by Ten-X for photography purposes, to test the speed of draw and smoothness of action before the camera. The result was a gun that, with the forward cant of the Chisholm’s Trail holster clears the leather like a gun with a shorter barrel. The smooth action of the EMF allowed for quick firing.
Taken down range to our test site and loaded with Goex Black Dawg Pinnacle Black Powder .45 Long Colt 235-grain RNFP cartridges (a round that is smoky and hard hitting) we managed a best grouping from around 40 feet of 1-inch center-to-center. The Black Dawg traveling down a foot of rifled steel cleared the traps of our ProChrono chronograph at an average of 805 fps (feet per second). The accuracy with the Black Dawg was particularly good considering the amount of kick that the Pinnacle black powder produces. At our standard 10 meter range (33 feet) the GWII delivered 5 rounds on target with three overlapping in the X, 1 in the 10 and a slight flyer in the 9. Overall, from a comparatively close distance the gun is a tack driver, although point of aim needed to be compensated by shooting 3-inches under.

Final Notes
For a big gun with a long barrel, the EMF Great Western II buntline is a fine shooter, and an accurate reproduction of an historic Colt single-action model of the circa 1896 Early Smokeless Powder frame design with the transverse cylinder latch. Pietta also uses this latch to create a safety mechanism which is actuated, after cocking the hammer, by depressing the latch and pushing the cylinder arbor further back and into a second notch. With the arbor in this position, the rounded end protrudes through the face of the recoil shield and blocks the hammer from fully dropping into battery. It is a simple and effective way to prevent an accidental discharge, this side of an empty chamber. It’s also darn confounding to anyone not familiar with this design.

As Colt copies go, the new EMF GWII Buntline by Pietta is a fine six shooter right out of the box with a good fit and finish, smooth action, and better than average accuracy, though not surprising considering the barrel is almost half way to the target. The quality of this gun also illustrates the great strides Pietta has made in producing a quality Colt SAA style revolver at a price that most anyone with even a trace of the Old West coursing through their veins can afford. Ned Buntline would be amused. ✪ 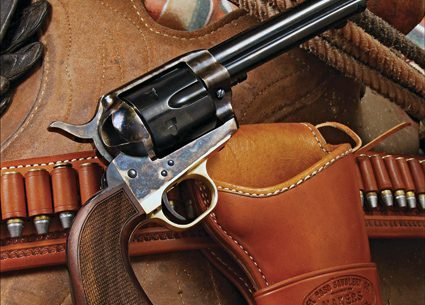