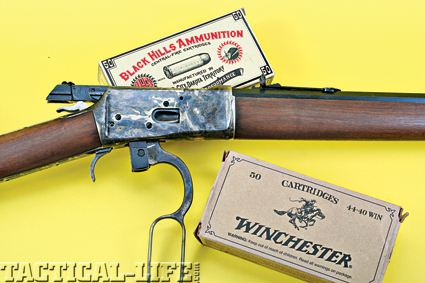 The Hartford ’92 was tested with both Winchester and Black Hills smokeless factory ammunition. The rifle showed a definite preference for lighter bullets and higher velocity.

WHEN I WAS A COLLEGE STUDENT back in the 1970s, I was engaged to a girl whose old Yankee family owned a small, two-man sawmill operation. As a part of the sawmill operation, her family also owned a huge tract of mature forestland. The young lady was certainly desirable in her own right, but her ability to provide access to some prime hunting ground did nothing to diminish her appeal.

I suppose that her family had been on that land since 1676 after they whipped the Narragansett Indians during King Phillips War. And, like all good Yankees, they didn’t throw much away. So there was lots of neat old stuff around her homestead. But my favorite artifact by far was a Winchester 1892 rifle chambered in .44-40. This was a full-sized rifle with a 24-inch octagon barrel and a Lyman tang sight. It was the smoothest lever action I’ve ever shot. It was awfully pretty too.

We all know that break-ups are a messy business, and unfortunately, when that young lady and I decided not to marry, I also lost my visitation rights with the ’92. I’ve been carrying a torch for that rifle all these years, and I suppose that has warped my memory a bit. In my mind I remember that old gun as being so smooth and lovely that none of the modern reproductions have been able to compete with it. So, for all this time, I haven’t had a ’92 rifle in my gun cabinet. But 32 years is long enough to pine for a lost love. I was finally in the market for a ’92.

You might wonder what got me so keen to get a ’92 after all these years. The answer is that after 10 years of shooting black powder exclusively in Cowboy Action Shooting (CAS) matches, I decided I needed to expand my horizons. I intended to shoot an occasional match with smokeless powder. This was a tough decision for me, and I’m certainly not abandoning black powder. But there are times when my travel schedule just doesn’t leave time for cleaning four black powder guns after a match. So if the choice is between shooting smokeless powder or skipping the match, I’d rather shoot smokeless. Besides, this has been a great excuse to set up a whole new battery of shooting irons. And you should never miss an opportunity to exercise a really good excuse to buy new guns.
I selected a pair of 1890 Remington revolvers as my smokeless handguns because their 1890 designation makes them the closest in time to the smokeless powder era. Using that criterion I should have opted for an 1894 Marlin as my smokeless rifle, but the urge to recapture a bit of my youth by shooting a ’92 again had been growing in me.

Even discounting my adolescent infatuation with the ’92, I’d still have had a yen for one. They are neat little shooters. Essentially ‘92s are dainty versions of the 1886 Winchester. In the ’86 Winchester, John Browning solved the seemingly insurmountable hurdle of producing a lever action rifle that could handle the .45-70 cartridge without having a receiver that was the size and weight of a blacksmith’s anvil. Browning solved that problem by combining a pivoting feed ramp with a very strong twin vertical locking bolt system.

Thomas Bennett, the head of Winchester, was so fond of the 1886 rifle that, when he was thinking about replacing the 1873 model, he asked Browning to design a replacement based on the ’86 design. Bennett was so hot to get the rifle he offered to pay Browning $10,000 if he delivered the rifle in three months and a $5,000 bonus if he could produce a prototype in two months. Browning told him to make it $20,000 and he’d have it in a month. And that’s just what happened.

The 1892 model was a huge success for Winchester. Over a 49-year production run they sold over one million of the little rifles. As with its predecessor, the 1873, the ’92 Winchester was chambered for all the 19th century’s dual use cartridges, the .44-40, .38-40 and .32-20. Because of the inherent strength of Browning’s design, modern era copies of the ’92 have even been chambered for the .44 Mag. And that’s a round you’d never want to fire in a toggle link action like the Winchester 1873. 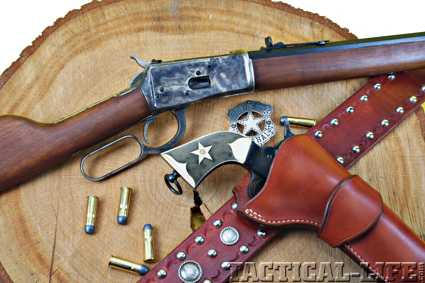 The EMF Hartford ’92 was selected as the companion rifle to author’s 1890 Remingtons in his smokeless powder battery. 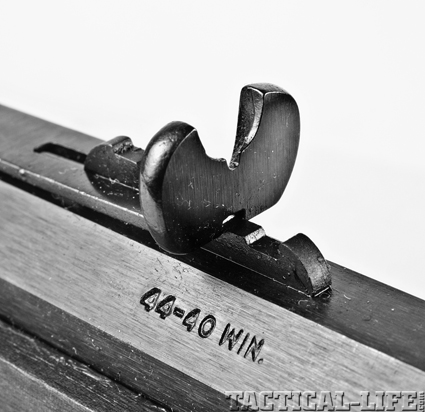 Gun Details
There are a number of things I like very much about this rifle. First on this list by a mile is the stock wood. That’s not because it’s some fancy piece of full-figured walnut. I like this stock because it looks like plain, honest, oil-finished American Walnut. It looks the way a gunstock ought to look.
My memory of Rossi ’92s was that they all had stocks that were less than impressive. When I saw the new ‘92s I assumed that EMF must have provided Rossi with a supply of walnut to stock their offerings. But the folks at EMF have told me that Rossi still uses Brazilian hardwood on their guns. However, EMF insists that Rossi use only premium wood with the look and color of walnut on rifles destined to sell under EMF’s banner. Whatever they are doing, it works. The stock gets two thumbs up.

I also like the color casehardening on the receiver. The colors are subdued, which is the way I like them on a rifle. The coverage of color is much better than you’ll find on the majority of Italian offerings. Except for the blued bolt, all the metal south of the barrel is color casehardened. My gun has the 24-inch octagonal barrel with a full-length magazine tube. The flats are moderately well polished, and the barrel and magazine tube both wear a modern hot blue finish. The sights are excellent. The front sight is a very easy to see wide blade, which is undercut to reduce glare. The rear sight is a well-designed, step-adjustable, semi-buckhorn. The fine sighting notch is square cut and allows plenty of daylight around the front blade. The sight picture is very easy to acquire.
The EMF ’92 has a safety mounted on the rear of the bolt. Personally, I could live without it. I prefer my ‘92s just as John Browning designed them, but our government feels we have to be protected from ourselves. The safety is easy to use. It’s a rotating lever. Turn it counter clockwise to go into safe mode and go clockwise to make the rifle hot.

The ’92 has a much shorter and lighter action than the 1873 rifle. This gives the ’92 excellent balance and pointability. In the rifle version, it’s slightly barrel heavy, which helps it settle down for serious shooting. When I first started CAS, ‘92s were all the rage. Real serious competitors shot ’94 Marlins and almost everybody else shot ‘92s. That is no longer the case. The straight line feeding system on 1873s makes those rifles virtually jam-proof, so they have gradually supplanted the ’92 as the most prevalent CAS rifle. 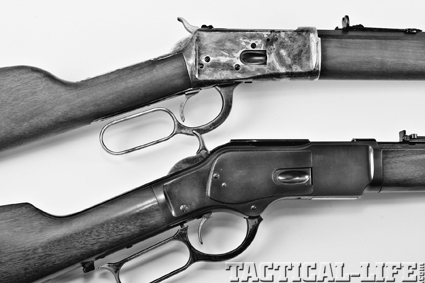 The 1892 (top) has a much shorter and lighter receiver than the 1873 model it replaced, despite being chambered for the same cartridges.

Though a ’92 is more likely to experience a stove-piped shell case than a ’73 due to its angled feed ramp, jams are certainly not a common occurrence. I didn’t have any over several hundred rounds of shooting with this rifle. And that angled feeding system makes for a compact rifle that’s a joy to carry in the woods. Though we don’t think of it in those terms today, the model ’92 chambered in .44-40 was a typical deer rifle in the northeast in the first half of the 20th century.

Shooting Impressions
At the range the EMF ’92 performed up to my expectations. The action as it came from the box was certainly rougher than the action I remember on that old Winchester, but after a few hundred rounds it’s smoothing up on its own. I expect it to keep improving as time goes on. The trigger pull is 5.5 pounds. Even though I prefer a 3-pound trigger pull on a rifle, 5.5 pounds is very typical of a new lever action. 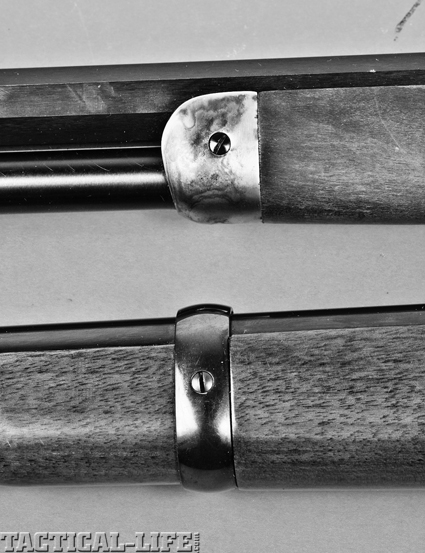 As a full-sized rifle the ‘92’s forearm is held on with a color casehardened cap (top) rather than a carbine barrel band.

Because this rifle is going to be part of my smokeless battery, I tested it with Black Hills and Winchester factory smokeless ammo. Disassembling a ’92 is considerably more complex than taking apart a model ’73. So, I don’t plan on ever feeding black powder to this Hartford ’92.

I started off the range test with Winchester Cowboy ammunition. These rounds are loaded with a 225-grain lead, round-nose, flat point slug. They are built for CAS competition, and for that reason they are loaded pretty mild. Through the 24-inch barrel they turned in an average velocity of 940 feet per second (fps). That’s surprisingly slow for a .44-40. Accuracy was acceptable, but not spectacular. From a 25-yard bench rest I averaged 2-inch groups.

Changing to 200-grain Black Hills ammo produced a notable improvement. These rounds clocked along at 1248 fps. That’s what I’d expect from a .44-40 round. Accuracy was better too. I was able to average 1-inch groups with the Black Hills rounds from the 25-yard bench. So I would say the ’92 has a definite preference for the lighter bullets at a zippier pace. That’s okay because that’s my preference as well.

It kind of makes me wonder why I waited all these years to get a ’92. ✪ 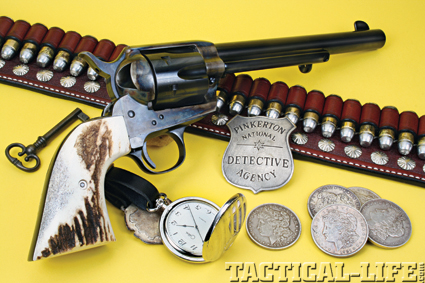 The Hartford ’92 was tested with both Winchester and Black Hills smokeless factory ammunition.…