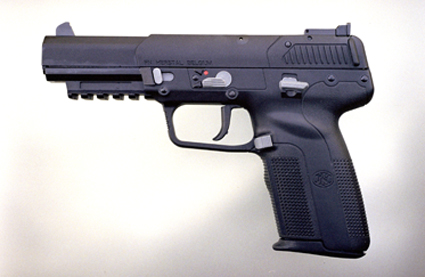 When the original version of the FNH USA Five-seveN first appeared in the mid-to-late 1990s, it was not sold to civilians. Its marvelous little high-speed cartridge (the SS-190 load) had a steel core. Moving at 2050 feet per second (fps), it easily penetrated auto bodies and body armor. It was, of course, available only to law enforcement agencies.

The Five-seveN (it’s neat, the way the put ‘FN’ into the model name) has also been called the IOM (Individual Officer Model) and USG (for US Government). It is presently in use by several agencies, which at this time, I cannot specify. Finally, in October of 2005, with a few slight design changes and different ammo, the pistol was offered on the commercial market.

The 5.7x28mm is a marvelous little cartridge. In case you were wondering, 5.7mm translates to .224 in US measurement. The previously mentioned steel-core bullet version is identified by a black-painted tip. The two loads hat I used in test-firing the Five-seveN included the SS197SR “Sporting” load with a 40-grain Hornady V-Max bullet, velocity 1700 fps.

The other load was the SS195LF, the letters stand for Lead-Free, in reference to the primer. The bullet in this one has an aluminum core, and velocity is listed at 2030 fps. Another load, not tested, is the SS193 Subsonic, moving at 980 fps, for use with an attached suppressor. 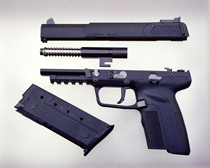 Gun Details
Now, let’s look at the pistol. The dimensions are fully “duty-size”, definitely not a compact. Even so, it is not bulky. Given the 1.592-inch overall length of the cartridge, you might think the front-to-back grip frame measurement would make the trigger reach excessive. This is not so because trigger backstrap distance is only 2.75 inches, exactly the same as an issue M9 Beretta.

The Five-seveN’s construction follows the modern trend with a polymer frame and magazine, and the rest fine steel. Magazines have a steel insert at the feed lips. The magazine holds 20 rounds and the alternate feed delivery makes it easy to load. The release button is in the usual location and is reversible.

The slide latch is at the top of the grip on the left side. The manual safety, located above the trigger, has levers on both sides. The left one is easily operated by the thumb of the supporting hand, and the one on the right by the trigger finger, the off-safe movement is downward and a red dot is exposed.

The grip frame has good molded checkering and cross-grooving, and the hold is excellent. On the frontstrap just below the guard there is a single slight swell, not quite a finger-groove that aids control. The front of the guard is not hooked, but there s cross-grooving. For those who want to hang a light or a laser, the front extension of the frame has a full Picatinny rail.

I tried the excellent M3 Tactical Illuminator, and it stayed firmly in place. The dual switches were in easy reach of the rigger finger. The two switch positions give you a choice, instant on/off or fully on. I have never been a fan of hanging on lights, but this does make a marvelously useful rig. I also examined an even smaller light unit from Insight Technology, the SSL-1 with a rubber-sealed (thus waterproof) battery compartment.

The sights on the Five-seveN are the familiar three-white dots type, and the picture is square post and notch. The dot on the front sight is slightly larger than the ones flanking the rear notch, and this helps in quick acquisition. The rear sight is fully adjustable.

The pistol is not striker-fire, it has a pivoting internal hammer. This contributes to a nice trigger pull. There is about 0.13 of an inch take-up, a crisp 4.5-pound pull, and absolutely no over-travel. For an “on-duty” type non-target pistol, this is remarkable. The wide trigger has vertical ridges, but they’re not deep, so not annoying.

The locking system is very unusual. The barrel movement is level, and the locking piece in the frame rolls over to the rear. It’s a smooth system, and a good one. There is an automatic internal firing pin block. When the chamber is loaded a small bright pin protrudes on the left side of the slide where it can be seen, or felt in the dark.

Shots Fired
With the two factory loads mentioned earlier, I tried the Five-seveN at 25 yards from a casual rest. The smallest group measured 2.25 inches, and the largest 3 inches. All were well-centered and without any malfunctions. Aside from the FN quality, bottle-necked cartridges rarely misfeed.

The felt recoil was very light, giving quick recovery for the next shot. Remember, we are launching a very small projectile, and in this universe Mr. Newton’s laws of motion apply. Having established that the pistol is accurate, I wanted to see what the little bullets did on impact, so I lined up several water-filled milk jugs. Four of them. Alas, I miscalculated. With the first shot, the first and second jugs were completely destroyed, the third and fourth had large entry and exit holes, and the bullet disappeared into the downrange backstop. I never got to examine it, and I had no more jugs. We can, I think, agree that the 5.7x28mm is powerful.

With that performance in mind, the Five-seveN might not be the best choice for an inside-the-house gun. For farm or ranch, though, it would be fine. Obviously, it’s perfect for law enforcement. In fact, it is the primary sidearm for quite a number of SWAT units. A final assessment, yes, it’s a little weird…but it’s a nice weird. I like it.